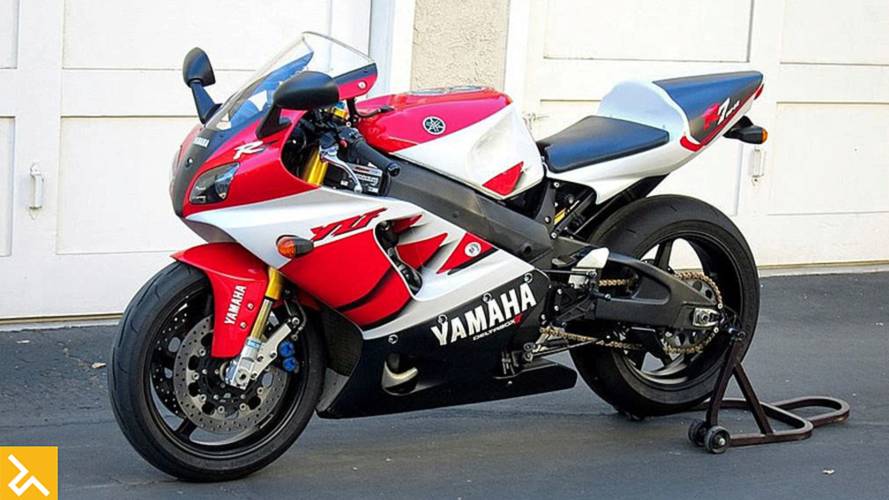 This weeks Bike-uriosities features a unique pair of R7s, a Kenny Roberts framed TT500 along with an Amazons and trick NSR150R? Curious? Check it out here.

The legendary Kenny Roberts put his name on a few frames back in the day - here's a Flat Track racer with serial number number five. It's a legit Yamaha TT500 engine that has a real racing history in the Northeast.

It's said to run well so you could race it as is or try and restore it. Components include a Marzocchi fork, Grimeca brakes, and Ceriani triple tree clamps.

Find this flat tracker for sale in Los Gatos, California with an opening bid of $3,395 here on eBay.

Here's a big dual-sport for those of you that think the GS, Adventure or Multistrada are all too common. Like the Multi, the TRE K is a street-oriented adventure bike, although this is one of the "Amazonas" variants that adds spoked-wheels (with a larger 19" wheel up front) and wave brake rotors for a slightly more off-road friendly version. It's one of the more attractive dual-sport packages from the time, and it'll stand out at a bike night!

The 1030cc Triple produces 103 horsepower - it's the same motor as found in the Cafe Racer, Tornado, and TnT though it's been tuned for more of a mid range hit. It'll still sound glorious. The bike features Excel rims, Brembo brakes, Marzocchi forks, and an Extreme Tech rear shock. For more on the TRE K (base model, not Amazonas), check out this comparison with a Tiger here on Motorcycle.com.

This example (VIN: ZBNTNTRA18P100035) has 2,224 miles and is claimed to be "absolutely perfect with no imperfections." It's just had a recent service and it comes with a new battery, new Continental TKC 70 tires, brand new panniers, and a lowering kit that has not been installed. Find this Amazonas for sale in Los Angeles, California with bidding up to $2,125 and the reserve not yet met here on eBay.

Over the last year, this 1962 Triumph Bonnie has been restored to "Concours Quality" according to its current owner. It just placed third in the Masters Class of the 34th annual Battle of the Brits show in Michigan and its a fine representation of the historic British model.

This example (VIN: T120 D16897) was repainted with paints from Don Hutchinson, all the original black parts were powder coated, the engine was rebuilt with a .020" over bore, and it features about 150psi compression at wide open throttle. Note that the tires, tubes, and rim locks are original - great for show but you won't want to use them on the street. The sale includes the owner's manual, tool kit (not entirely complete), copy of the original card insert, original fuel petcocks, and more.

Find this restored Bonnie for sale in Port Huron, Michigan with bidding up to $11,700 and the reserve not yet met here on eBay.

This has to be the greatest "street legal" mini bike I've seen in years. The bike is insured, titled, and has a plate, though the motor swap is technically not street legal. In the seller's words, "With the right gearing I'm sure it could hit 100mph, but you'd be a fucking idiot to get it going that fast. It's currently geared to top out at about 70-75mph, and it gets through the gears insanely quick."

This would be such a hoot. The bike has the motor and swingarm from a 2007 Honda CR150R (about 23 horsepower). It has brembo brakes, steel braided brake lines, custom fender, FMF muffler, adjustable rear shock, and it's said to be current with maintenance. I really want to ride this (but probably just once).

If you want to ride it and keep it in your garage, you're looking at $6,000 or best offer for this crazy NSR in the East Bay Area, California for $6,000 here on the Bay Area Riders Forum.

Yamaha released just 500 examples of the homologation special R7 (also known was the OWO2). Only 31 of them were sold through US dealers, while another three were imported directly by Yamaha's US division. Someone in Southern California has two examples - one of the factory imported bikes and one built by Graves Motorsports with an R1 engine from the AMA's Formula Extreme class. These are some iconic sportbikes.

From the dealer floor, the OWO2 was basically a street legal World Superbike racer. MSRP was about $32,000, making it twice as expensive as Honda's closest offering, the RC51 SP1. The R7 was restricted to 106 horsepower from the factory, so Yamaha offered two hop-up kits: one added 25 hp, while the Race Kit added 55 hp, at a cost of over $10,000. These came with a titanium crank as standard, and full Ohlins suspension front and rear. The only concern is that the titanium cranks actually had a manufacturing issue from the factory and many of them cracked. Yamaha issued a recall, so you must make sure that the R7 you buy has had the crank taken care of.

The 'stock' red and white example is a one-owner bike that's plated, registered, and titled in California. It has about 10,000 miles and the recall work has already been performed. Upgrades include a derestriction, Marchesini wheels, Power Commander, Akrapovic titanium exhaust, and the full size radiator and airbox from the race kit. It's never been tracked. Find it for sale in Agoura Hills, California with a BIN of $26,900 or best offer here on eBay.

The other example is a bit insane. Graves Motorsports took the R7 frame and slightly modified it to fit an R1 engine that had been prepped for Formula Extreme racing (note the R7-1 emblems on the tail). It features a slipper clutch, 41mm flatslide carbs, bigger radiator, titanium headers, and Akrapovic carbon exhaust. Ohlins suspension and Brembo brakes complement Marchesini wheels, and somehow this is also titled and plated in California - and it has about 8,750 miles of street usage! Awesome. Find this highly modified R7 for sale in Agoura Hills, California with a BIN of $21,900 or best offer here on eBay.

Which was your favorite? I'll take the red and white R7!