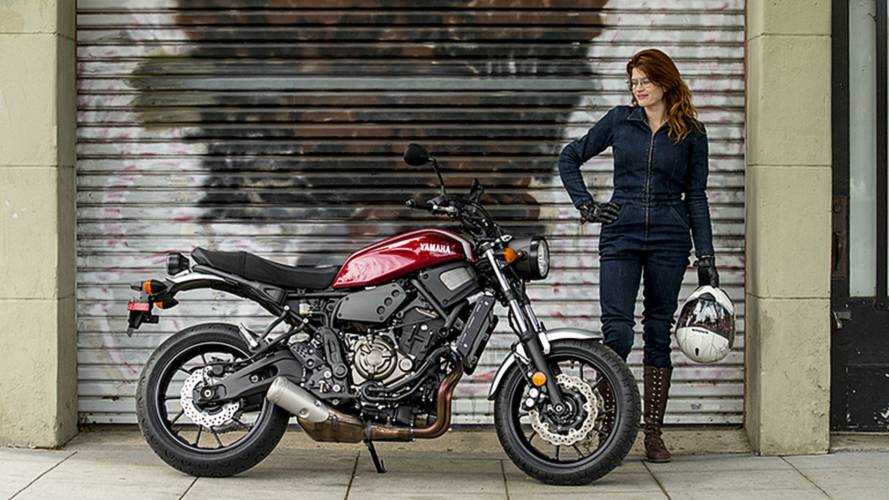 The XSR700 has been winning hearts and minds in Europe for two years. Now it's coming to the North American market. Is it as good as the Europeans say?

The Yamaha XSR700 is not new. The 689cc twin has been thrilling the hearts of European riders since 2015, but for some reason Yamaha didn't choose to release it in the retro-loving USA until now.

When I got the email from Yamaha asking me to attend the San Diego launch of the XSR700 I jumped. I've been wanting to ride one ever since falling for its larger sibling, the XSR900, back when it was launched in early 2016. I was jealous that the 700 – which has actually been around longer – hadn’t been seen stateside yet. I’ve read many reviews where journalists say they prefer the 700 and I was intrigued to see why. Like a lot of people, my instinct is usually "MORE + FASTER = BETTER," but the XSR700 ended up showing me that my taste is actually more discerning; I might be less of a jock than I thought.

Yamaha brought us to a mixer the night before, where it showcased a number of bikes and products from its Faster Sons sub-brand. Faster Sons, which began with the XSR700, is Yamaha’s attempt at making what it calls an "homage to Yamaha’s rich heritage while being focused on performance for the future."

The people behind Faster Sons get what's cool about Yamaha’s heritage and have – in my opinion – done a great job of interpreting these cues into modern style and accessories for the line. Using the XSR700 as the focus bike for this branding concept seems to make perfect sense to me, and the video the company made of a father and son riding a Hageman Motorcycles 1972 650 and a 2018 XSR700 was pretty dang cute, and I might have fogged my glasses a little when I saw it.

The next morning we started out in downtown San Diego, which meant a lot of slow going and dealing with traffic. The bike performed well, and – without giving into the temptation to make this review all about comparing the XSR700 and XSR900 – I realized I would much rather be on the 700 if a lot of my riding time was spent navigating traffic. The predictability and smooth power delivery of the 700's crossplane twin was a nice contrast to the 900’s hoppy, triple-inspired character. The 700 is obviously a bit smaller, but it doesn’t feel like there’s a huge step down or that it has any less character. It’s got the snappy torque of an MT-07 (nee FZ-07), making your front wheel want to lift off the ground, which isn't surprising because that's essentially what the XSR700 is: an MT-07 in better clothing. And it has a better riding position because of the taller, wider bars, and more upright posture.

The front brake is powerful without being too sensitive; it only took me a few minutes of riding to find the sweet spot where I could use the front quickly without the fork dipping. The back brake felt a bit soft. Although I like the more upright riding position (compared to the MT-07), once I hit the highway and was jamming at 80-90 mph I felt its negative aspects. The wind really hits your chest – and my torso is shorter than most. Under 70 mph, though, all was well.

Which is roughly (honest, officer) the speed I kept in the mountains outside of San Diego. There, I really got to see what the bike could do. For me, the geometry of this bike just makes it so much fun to throw around in the canyons. The tires felt firmly stuck to the ground as I was zipping around with a level of confidence I might not usually find on my first day with a new bike. I really enjoyed pushing without ever feeling like it was going to get away from me. The seating position made me nostalgic for my first few years of riding, pushing myself in the canyons on my old Honda – but without having to hold back because of 40-year-old brakes. I felt like I was a real grownup motorcyclist.

In the middle of the mountain ride we stopped for a water break and needed to refuel the bikes because their tanks were almost empty. This was a bit surprising to me considering the short distance we'd covered. I ran into this same issue when I later took the bike home to Los Angeles. As best I can tell, spirited riding defeats the XSR700's impressive MPG claims.

Meanwhile, the 41 mm telescopic fork update to the suspension makes this bike one of the most comfortable I have ridden. I overheard some heavier riders saying they would need to tighten the suspension but I felt just the opposite; I didn’t make any adjustments to the set-up. At 5 feet 11 inches and 140 lbs, I’m almost always a bit lighter than the standard set-up – no such problem on the XSR700. But maybe I’ve just been drinking a lot of beer this summer and I’ve gained 20 lbs without noticing...

Given that the bike is so "cool" in so many other aspects, I don’t get why Yamaha is using those weird modern lollipop-style turn signals. They bobble about while you’re riding, which is obnoxious, and although I usually wouldn’t be one to change out the lighting on my bikes, I’d say these would have to go. Other than that, the XSR700 is one of the best incarnations of the Faster Sons Sport Heritage line – especially considering how easy it is to customize. Instead of removing a modern tank and dealing with a fuel cell and, let’s be honest, parts of the bike we don’t even want to get into, Yamaha made the tank covers removable. You can unbolt it and create that cotton candy-colored motorcycle you’ve always wanted. Then, if you really like the café look because you saw it on Tumblr seven years ago, you can easily remove the sub-frame and install a single seat to make the rear end look super chopped – all without without harming the motorcycle and causing an angel to lose its wings.

My favorite of the many seat configurations was the flat-(almost)-tracker-looking seat I spotted on one of the custom builds Yamaha had at its pre-ride mixer. The stock seat is a bit narrow in the front, then widens out toward the back. I know I said the only changes I'd make to the XSR700 were in its indicator lights, but I think I might switch out the seat as well. My tiny butt was hurting after a few days of riding on this thing. I have had this problem on bikes before; I chalk it up to the seat shape and my cheeks not being wide enough to give me the cushion I need.  Small butt problems, right?

I like this bike because it gives a nod to heritage aesthetics without trying to simply regurgitate a vintage motorcycle, like a Triumph does. The XSR700 is inspired by bikes of the 1960s, but it's not trying to look exactly like a bike from the 1960s. This bike is for the motorcycle enthusiast who probably knows the difference between a Harley and a Triumph, the person who appreciates heritage aesthetics and the ability to customize, but who is also looking for something with more modern performance.

This is the bike you get when aesthetics and cool factor are as important as being able to wheelie into the sunset. I’ve seen a lot of people saying this bike is Yamaha’s attempt to jump on the bandwagon Ducati has created with the Scrambler. Certainly both companies are paying attention to the huge market that exists in the modern retro movement – regardless of whether the old-timer motorcycle types are happy about it. Why blame these brands for trying to market to a demographic other than old white men? There are a lot of young people getting into bikes right now; we care about design, we care about cool factor and branding. And if I were in the market for a new ride I'd choose the XSR700 many times over. It is a pleasure to ride. Not to mention it’s a Yamaha, so it will cost less out the door and in maintenance over the years.