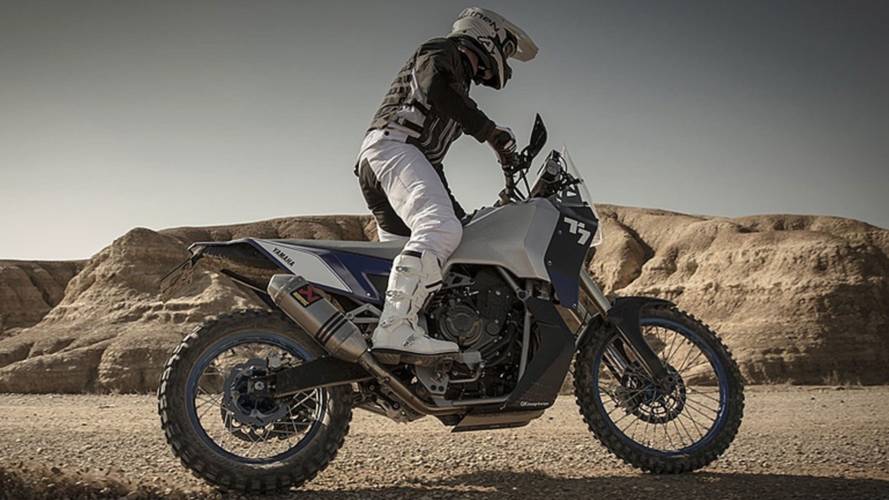 In recent years Yamaha has enjoyed the success of its affordable middleweight bikes like the FZ and MT lineups. It comes as no surprise then that Yamaha would update these popular offerings. Recently, spy shots of a new MT-07 adventure machine were snapped in the UK by Motorcycle News, which begs the question, “Will Yamaha’s highly anticipated T7 concept actually see production?” Team Blue found a substantial customer base with their XT660Z in 2008, and with all the buzz surrounding the T7 after its unveiling in Milan last year, putting the concept into production seems logical.

A handful of components seen in the spy shots appear to be production items including the tail section, suspension linkages, and exhaust. This suggests that production T7s will not only see the light of day, but sooner than we thought. Thanks to the bike's bulky camo, we can’t see enough of the bike's final appearance to know what was changed from the concept vehicle. What we can see suggests that not too much was altered, assuming the test bike was intentionally not wearing all of its body pieces and various component guards as the empty mounting points that can be seen suggest. The biggest change I can see is that the concept’s solo-seat was changed out for a two-piece seat with a passenger pillion perch.

If it comes to market, the T7 would be powered by a mid-range twin, opposed to the XT660Z’s single which is also shared by the MT-03. The 689cc engine makes 74hp and is also used in the Tracer 700, meaning Yamaha should effectively be able to keep costs down as the more models that use the same engine, the cheaper that engine is to produce. The T7 also borrows the LCD dash from the MT-07 instead of getting its own unique dash, suggesting Yamaha is kept their eye on the bottom line while putting tougher the T7.

To allow the T7 to follow in the footsteps of the rest of the Tenere family, a new chassis was constructed that differs from the MT-07’s. It’s not an entirely new frame but it does sport a new cradle-style pair of downtubes that wrap around the engine to provide additional protection. A large radiator guard and bash guard that were found on the concept are almost guaranteed to make their way onto the production model. Between these features, the rally-style stacked headlight and enduro-tail, it’s increasingly clear that Yamaha intends to offer a bonafide ADV bike thats price may draw buyers towards it over competitor offerings in the same class like Triumph’s Tiger 800.

Despite many motorcycles existing that look the part but don’t actual possess much off road performance capabilities, this new MT-07 ADV bike appears to be ready to take on Dakar. What looks a whole hell of a lot like a 21” front wheel paired with what I think is a 18-inch rear not only scream “take me off road,” but the choice of Pirelli Scorpion MT90 tires lends further credibility to the idea that this machine has been engineered for more than the occasional fire road. The suspension looks like it has enough travel to take on treacherous terrain, and the choice of Enduro footpads and wide, upright handlebars leave little question as the the T7’s intended applications.

I wouldn’t be surprised if Yamaha offered at least two - if not more - versions of this new model. Because there was a major focus on keeping the costs down, it would make sense for them to also offer a more expensive spec that boasted a few trick components as well as a more definitively hardcore, rally-style version. Yamaha has yet to release any info regarding when the T7 will be released and what its price tag will say, but based on the buzz generated by the T7 Tenere concept, it looks like we’re going to be getting a pretty awesome middle-weight Japanese ADV bike in the next year.