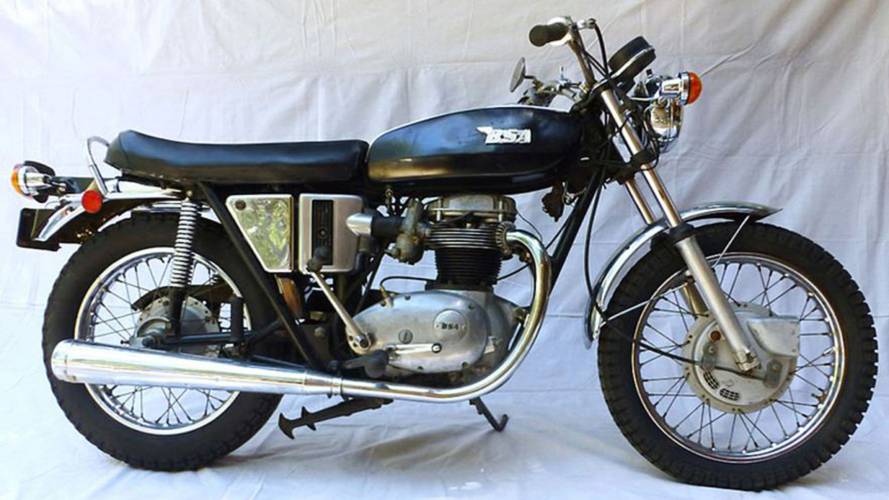 At Bike-urious, we’re spending all of our time finding the most interesting motorcycles that are currently for sale for you to drool over (and maybe empty your wallet for). Here’s our favorite finds from the last few days!

Starting with a rusty, stock Yamaha XS650 Special II, this seller turned his tired Yam into a street-legal tracker and I think it looks great. Here's how it all started.

Highlights of the work include a 19-inch rear wheel conversion with Shinko flat track tires on both ends, new rear shocks, rebuilt front forks, fiberglass flat track seat and bars, LED turn signals and headlight, Renthal grips on Al's Rapid Transit flat track bars, rebuilt carbs, and more. One thing I'd investigate further is that the seller specifies "Every gasket and seal on the engine has been replaced and the bike has no major leaks." I'd inquire if there were any minor leaks, as well.

The seller did an impressive amount of work himself - everything except powdercoating the frame and fabricating the custom exhaust. How do you think it ended up?

Find this XS650 for sale here on Craigslist for $4,000 in San Diego, California.

Every Britbike enthusiast knows about the A65 twin and the several model variants it powered. But did you know that there was a rare evolution called the A70? BSA produced 202 examples for homologation purposes so that they could use a 750cc twin in AMA flat track racing, and here's #162. It definitely needs some work, though. It's apparently complete, but the seller calls it a "rolling restoration project." Still, the A70L was BSA's rarest and biggest post-war twin, and should make this an appealing project for BSA fanatics.

Basic specifications of this ultra-rare Beeza are approximately 54 horsepower, 110 mph top speed, and a 390 pound dry weight. The motor is mated to a 4-speed transmission, and braking is courtesy of with a twin leading shoe drum up front and a single leading shoe drum in the back. For more on the A70L, check out this buyer's guide from Sump Magazine.

This bike shows 12,822 miles on the odometer, but the seller suggests that he can't be 100% sure that's the correct number. Thanks to some documentation that will be included in the sale, the seller believes that this is of 23 units that were originally shipped to California. As mentioned above, this bike is going to need some work. The main problem spot seems to be the electrical system, (The deuce you say! -Ed.) and you're going to have to do a bit of digging through the 45-year-old Lucas Electrics system to see what the problem is. Good luck. There's a lot of potential here, and it's nice that it seems relatively untouched. Who's got a hankering for a rare project? Thankfully, the seller does an excellent job of including lots of photos of different spots on the bike to aid your visual inspection. This bike has had 3 owners and it looks like hasn't run since 1975. Let's hope owner #4 changes that!

Find this rare BSA for sale in Idyllwild, California with bidding up to $4,065 and the reserve not yet met here on eBay.

Thornton Hundred Motorcycles is made up of just one twenty-something kid in the U.K. with some impressive building chops. Jody Millhouse – who is Thornton Hundred – has a father who is also an established player in the building world, so it's not too surprising to see the apple hasn't fallen too far from the tree. This tracker build - referred to simply as the "Thornton Hundred CR500 Tracker - has garnered its fair share of attention in the custom world, and has been featured on TheBikeShed.com as well as being awarded with BikeEXIF's Bike of the Week. It was also specially invited to be featured at the BikeShed's 2017 show.

This unique build started its life as a 1986 Honda CR500. The talented young Millhouse got to work tearing the entire bike down before building it back up to how it now stands today with brand new components throughout like an HPI ignition system and Boyesen magnesium engine covers. A handful of one-off components were required to bring this project to like including the Tracker's custom made underseat exhaust that exits beneath the tail and stainless tig welded piping. To keep everything cool, an alloy radiator was added to the mix that boasts custom made silicon hoses.

Further breathing life into this 30-year-old two-stroke is a new custom, tracker-style tail section that sports an Alcantara seat with red Bentley stitching. The CR500 has something of a reputation as being a beast of a motorcycle so it genuinely does make for a great choice when building a tracker. The whole machine sits on a pair of Excel rims wrapped in Maxxis race tires and clocks in at under 220lbs (or 100kgs), enabling the half liter power plant to make the most of its 70hp. The tank on this bike came from an XR75 too.

Dedicated purpose-built motorcycles are some of my favorite to look at. The modifications made to them, the components they possess and the components they lack both play an equal role in making the bike what it is and this Tracker custom puts an awesome modern spin on classic genre of motorcycle that has become increasing popular. You can find this beautiful one-off tracker custom here on TheBikeShed with a pretty reasonable price tag of £9,995 or $12,882 in Milton Keynes, United Kingdom.

This bike-uriousity brought to you by Tim H!

Prepare yourself for one of the coolest airhead customs I've seen in a long time. The seller started the work 4 years ago saying, "the bike was an R100 GSPD. I rode it for a little on local logging/dirt roads and thought it needed some changes made. As those things go, one thing led to another." Now that's an understatement!

Highlights of the work include three aluminum fuel tanks that have a total capacity of eight gallons, the swingarm from a R1100, 46mm KYB forks, 320mm front brake disc, new Yacugar rear shock, two Rigid head lights, the custom aluminum front fairing, and a whole lot more. If you're interested in this bike at all, the seller has a build thread on ADVRider that's worth checking out. On the last page of the build thread, you'll see that the seller rides this bike like as it should be, and how that can lead to problems. He was able to get the bike out of this predicament by himself without 'a scratch on the bike or himself.'

You can find this custom airhead for sale in Vancouver Island, British Columbia for $6,500 here on ADVRider.

Next Saturday, Arts Parts is auctioning off 450 bikes from the 60s through the 80s. There's actually going to be two auctions - one for in-person and internet bids and a separate auction of 128 bikes just for internet bidding.

There don't seem to be many bikes that just need gas and a rider, but there are lots of bikes that won't require much work. There's also plenty (about 200) with seized motors, so you may just be going to snap up part donors. The description for the auction just calls it "450 restorable motorcycles." Most of the bikes are from the Japanese big four, but there's a few Vespas, Bridgestones, and Zundapps as well.

Here's the link for in-person and internet bids, but note that there's a 10% premium for bidding online!

Those of you that can't make it out to Austin, Minnesota can check out this list for what's available exclusively to internet bidders.

What would you put in your garage?