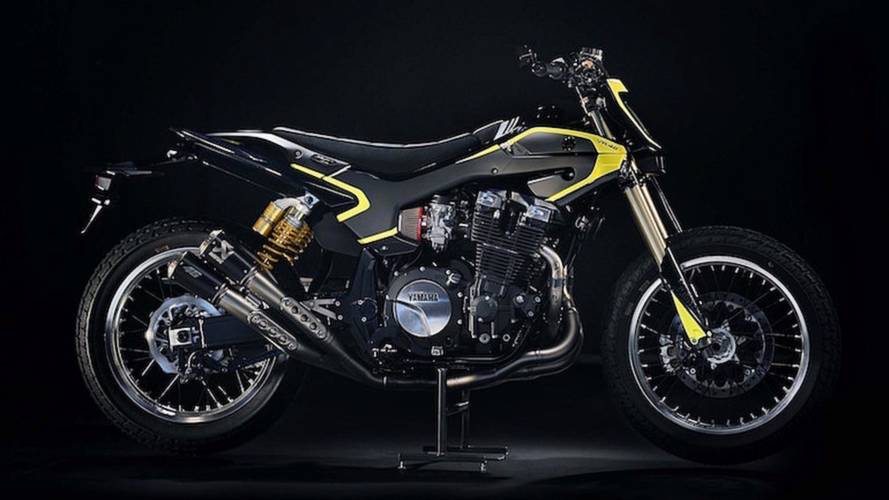 Thanks to its bulk and relatively languid performance, Yamaha's late, lamented XJR1300 doesn't really seem like the best donor bike to use as a base for a high-performance flat tracker. It has good bones though, and in the right hands just about any bike can be made to perform well in arenas in which it really wasn't designed to perform. Hands like those of, say, ace custom bike designer Rodolfo Frascoli. This week's Bike of the Week is a custom commissioned by none other than The Doctor himself, Valentino Rossi – a stripped down, hopped up XJR1300 flat tracker called "Mya".

Frascoli kicked off his career working alongside Luciano Marabese, the man behind a myriad of custom builds commissioned by marques such as Moto Guzzi, Triumph, Vespa, Aprilia, Gilera, Moto Morini, Bajaj, and Yamaha. He spent over a decade as the director of Marabese Design’s design center, and is currently one of the go-to guys in European custom circles.

For Rossi's Mya build, the seasoned Italian designer started by stripping a donor XJR1300 down to the bare frame. A new enduro-style body design was drawn up to replace the donor's stock sheet metal, and a custom subframe was created. To make the bike as narrow as possible, the fuel cell was relocated to a custom tailpiece, and the broad saddle was replaced with a long, narrow MX-style seat. The bike then got a set of tracker-style handlebars with bar end mirrors and motocross foot pegs that alter the XJ’s ergonomics to give the build a riding position more conducive to flat tracking. A set of 19-inch flat track rims further transform Mya into a thoroughbred flat tracker.

Mya's heart is Yamaha's air-cooled, 1,251cc, DOHC, inline four. While I don't have a lot of specifics here, the power-plant was probably heavily massaged before being given a custom Akrapovic 4-2-1-2 full exhaust. Some components were obviously upgraded, such as the top-shelf Ohlins long-travel forks, rear adjustable gas cartridge shocks, and the front dual-piston Brembo unit.

Small accouterments, such as the fork guards and the custom fairing/number plate cowl, help to round out the flat track look. The instrumentation consists of a single round digital all-in-one unit, which keeps the cockpit relatively tidy. In typical Rossi-fashion, Mya wears a livery with neon accents over a matte primary coat - similar to some of the black and neon yellow paint schemes Rossi sometimes rocks on his MotoGP bikes in test sessions. Finishing off the build are several “Mya VR|46” badges that make Rossi’s new custom look like it came straight from the factory.

READ MORE: Valentino Rossi is Apparently a Badass on Four Wheels Too

I was seriously impressed with Deus Ex’s EAU ROUGE XJR custom, but Frascoli’s work here is hands-down my favorite XJR build. It's also one of my all-time favorite tracker builds. Part of what makes this build so cool is that it’s not just a garage queen – it was built to be ridden and thrashed, and that’s almost certainly exactly what will happen to it.

If you’ve got a bike you think deserves to be Rideapart’s next Bike of the Week, drop us a line at info@rideapart.com.