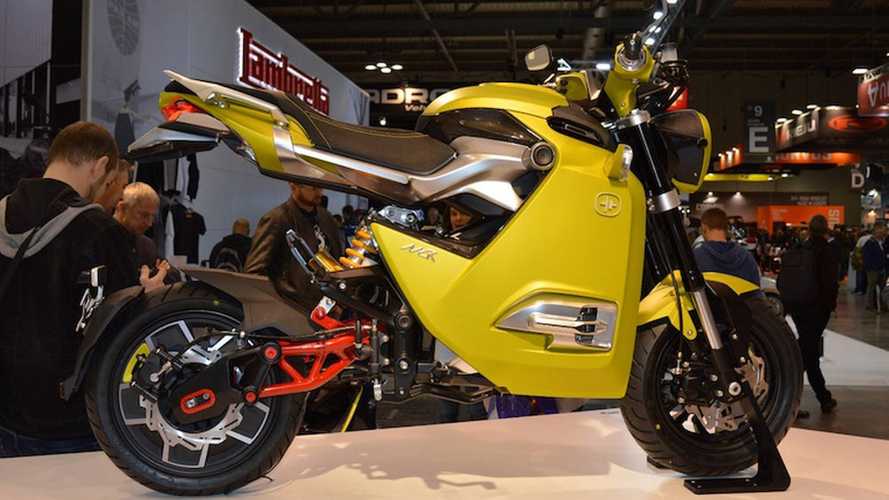 The annual EICMA show in Milan has become such a broad banquet of new models that some smaller or more niche offerings tend to get overlooked. One such was was the Otto MCR (Mini City Racer) electric from Taiwan, which caught the eye of the folks from New Atlas. About the size of a Honda Grom, the MCR may just create its own category in the growing roster of small electric motorcycles – the commuter sport bike.

In the absence of anything in the photos to depict the bike’s scale, the MCR could be mistaken for a full-size, futuristic roadster. Seat height is just under 30 inches though, and the machine weighs in at just 265 pounds. The 7.5 kW (10 hp) motor is housed in the rear hub, and draws power from a 4.8 kWh battery pack that provides 62 miles of silent transport. An integral charger can re-energize the batteries in two hours, or half that time when connected to a quick charger. The motor is rated for a maximum sustained speed of 57 mph, and top speed is 64 mph.

The MCR attracts attention not only for its big bike styling, but for its stout-looking chassis, numerous accessories, and connectivity features. The upper and lower cast aluminum frame members carry a central steel section and twin steel trellis connections at the steering head and swingarm. Both the inverted fork and monoshock are adjustable.

A color TFT display features a Bluetooth smartphone connection, and includes messaging and navigation functions. The system is set to display messages only when the bike is not moving, which Otto describes as a safety measure to avoid rider distraction. The unit also includes two video cameras incorporated in the headlight cowl and tail section. The aft camera transmits directly to the screen, replacing the rear view mirrors, and the front camera records riding clips. The system even includes a Facebook Live button on the handlebars, for sharing instant replay of video scenes (Kids these days... *rolls eyes* -Ed.).

No production schedule or market availability was released at the show, but Otto Bike did post an MSRP for the MCR at $5,000. When we find out more we'll be sure to let you know.