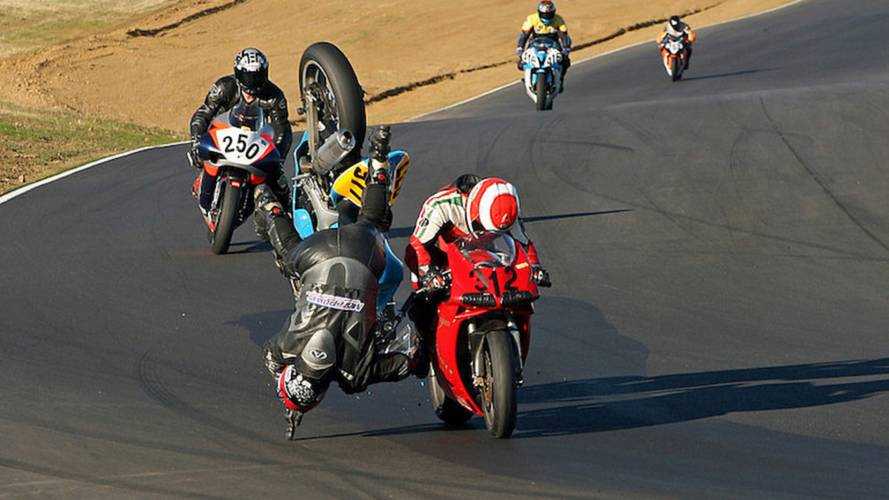 Pro motorcycle coach Ken Hill tells us why we crash and helps us to quit doing it.

Hey, friends! Riding season is in full swing now, and sadly we've been seeing a lot of crashes in the news. We felt like it was a good time to do a little Throwback Thursday action with this story, so we dusted it off, spruced it up, and republished it because we could all use some advice. - JM

For most of us who ride, having a "get-off" at some point is all but an eventuality. So what can we do to mitigate the risks? The causes of crashes  can be distilled down into two basic categories: ones that are caused by our own actions on the bike, and ones that are caused by something or someone else. The first is easier to control, and second is less so. But with practice, technique, and some skill training we can learn how to stack the odds in our favor. Honing these skills and techniques on the relative safety of a race track is a great way to make you a better rider on the road.

10 Common Motorcycle Crashes and How To Avoid Them

Ken Hill is a professional motorcycle coach whose main mission is to help people be better, safer riders. In his own words, Ken states: “I don’t train ‘racers or ‘street riders,’ I simply teach people how to be better motorcycle riders.”

Ken has plenty of experience: He has raced professionally for the AMA, and currently works with top professional motorcycles racers, including MotoAmerica racers such as JD Beach and the M4 Suzuki race team.

Ken has also instructed for great motorcycle riding programs such as Freddie Spencer Riding School and the Yamaha Champions Riding School. Currently, Ken works with the Rickdiculous Racing and the Rick Development Camp.

Ken primarily teaches people how to ride motorcycles at a track, which in my opinion is the best way to be a better rider. There’s more room to ride, so that means there’s literally more room for error. Therefore, it’s safer to try new things than on the streets.

I’ve personally worked with Ken in the past, and he’s helped my riding immensely. I often wished there were times when I could hear him giving his reassuring, logical advice right before I went out to my races. Fortunately, I no longer have to wish for that.

Ken recently started doing podcasts that comprise of frequently asked questions he receives from riders. So far, he’s covered topics such as when and how to apply the brakes, or how to obtain better body positioning.

Ken lays it out for a class of riders.

Ken's latest podcast, How to Get Over a Crash, really intrigued me because I’ve crashed a handful of times, so I know what it’s like to go down on numerous occasions. This podcast contains good stuff, especially since he first covers why motorcyclists crash before he gets into the “how to get over it” part.

I mean, really: Who the hell wants to crash? It hurts you, the bike, and your pocketbook. So, I feel it’s important to discuss the main reasons why you or I crash, as well as the ways to learn from the mistakes that caused the crash.

This could be you. Learn how to reduce your chances.

(Note: Ken discuses these points and how they are applied to track day riding and/or racing. However, most of these points are definitely useful for the street riders who tackle the twisties, too!)

1. Lack of Focus/Lack of a Plan

In this podcast, Ken mentions that you shouldn’t be distracted by something else other than riding. What helps with getting focused? Putting a plan in place in regards to what you’re going to work on, and how to accomplish the goals you set for yourself.

"I've made a terrible mistake."

From My Own Crash #1

I did a track day right before I was to get my racing license, and I remember being all over the place that day. I went out for the first session in the morning, so the track was cold. Even though track riders are always warned to take it easy for a lap or two for the first session, I didn’t listen: My lack of focus caused a minor lowside at Turn 11 at Thunderhill Raceway.

I clearly wasn’t focused. I needed to be aware of my tires as well as lean angle on the first lap out. I should have been more cognizant and told myself, “Make sure to get your rubbers up to temp before getting the bike to do what you want it to do.”

“Grab, stab, flick, throw, toss, hack, does not get better as you add speed to it, it gets worse,” Ken says in this podcast. Your inputs can make or break you. Ken states that you have to be less aggressive with how you get on the throttle, how you apply the brakes, and how you lean off the bike.

Rubber side down, please.

Your inputs need to always be smooth—especially your initial inputs. By doing this, not only will you go faster, but your chances of hitting the pavement will also decrease.

From My Own Crash #2

Ah, false neutrals—they happen, and when they do, it’s imperative to be able to think fast.

If you've never experienced one, a false neutral is when you go to grab the next gear, but it doesn’t fully engage. Therefore, you're riding the motorcycle in no gear or a "false neutral." So that happened to me while full throttle, going into the next turn. I went to go down a gear, but realized the bike wasn’t slowing down. I stood the bike up knowing I was about to go off track. I abruptly grabbed a handful of front brake right before I went off the track in an effort to slow myself down.

It was abrupt, and I knew what I did the second I hit the ground. I should have been smoother on my inputs, and I also should have went off track and ride it out by only using the rear brake. Lost focus and abrupt inputs caused this crash.

This one is pretty straightforward. Ken says that the problem is that when you rush corner entries, things can get hairy. Again, the goal with everything you do on the bike needs to be smooth, smooth, smooth — everything from your inputs to how you go into a corner. Patience does pay off at times.

From My Own Crash #3

I crashed hard while rushing a corner. I wanted to give it over with (I’ll tell you why in the next section), so every time I went through that specific turn, I wasn’t focused on what I needed to do well to get through that turn safely. It sure bite me in the end: Not only did I take myself out, but someone who was following me close behind also went down because he couldn’t avoid me.

Ken mentions having report cards for your riding – meaning, are you missing your apexes? Keep blowing corners over and over? If so, it means you’re getting pretty bad grades on your report card, and you know you need to improve/correct mistakes you're making.

Ken says that a great way to make sure you get good grades on your report card is by having a data-recording device. You can either have a camera on your bike, which helps shows you your entry and exist speeds, as well as shows how consistent you are in hitting those apexes. You can also have a friend follow you in order to see your body positioning and how well you’re leaning off the bike.

Again, this will shed some light on any mistakes you’re making. You can then plan (see #1 above) what to do the next time out on the track.

From My Own Crash #4

Remember how I told you I rushed the corner? The reason why was because it was turn 11 at Thunderhill Raceway. Yes, I crashed there twice in the same day! I literally repeated my mistake by crashing on the same day, at the same corner, at the same damn spot.

Since I crashed there earlier, I had a bad taste in my mouth from that specific corner so I tried to get it done quickly. That wasn’t the only mistake either. While leaned over, I was abrupt on the throttle, and my body positioning was pretty terrible to boot.

I'm about to lose the front!

I'd rather be on the bike, upright, than down here sliding on the ground...

CHECK OUT: Hard Lessons that Crashing Taught Me

Don’t be me. If you crash at a specific corner, figure out why. I fortunately had the guy who went down behind me filming; however, if I didn’t see that footage, I wouldn’t have known why I went down. Let’s just say that after this incident, I sought out help from Ken…

Ken says that it’s common to feel comfortable on your bike when you’re getting things right. But riders beware: comfort can easily lead to overconfidence. In the podcast, Ken mentions that he recently went down due to overconfidence. Clearly, it happens to the best of us.

Motorcycles are not designed to fly.

From My Own Crash #5

Back when I was still a noob at riding, I did plenty of track days to get faster. I was gaining confidence as I carried carry more speed; however, I wasn't building better riding skills. Simply going faster without developing the proper skills is a recipe for more crashes, trust me.

I started picking up the pace and was going into a fast turn (turn 2 this time, at Thunderhill). Naturally, I started feeling comfortable, confident, and having a good time. All of a sudden, the next thing I remember is waking up face down in the dirt. I clearly crashed, but again, had no idea as to why. Luckily, a track day instructor was right behind me and saw the whole thing. I had the bike too leaned over while also being crossed up. This caused my foot peg to catch on the asphalt and fling me off. This is how high-sides happen on a Ninja 250 everyone…

Ken’s Final Words of Wisdom: Get Over It

“The motorcycle is only as good as the inputs you give into it,” says Ken in this podcast. I learned that the hard way: All of my crashes were caused yours truly, and were because of my mental state. How I exude what's on my mind to my bike is everything when it comes to how the bike will react.

Towards the end of this podcast, Ken says that the key to moving on from a crash is to simply get over it. How so? Well, being stuck and dwelling on a crash involves bringing your emotions into the mix. Nuh uh, keep your feelings off the track! Ken says that by becoming a more technical rider, you will (obviously) work on technique. Therefore, every time you get off the track, make sure to review your personal report card.

As I said before (and as you can clearly see from these pictures), crashing flat out sucks. And if you can walk away from it, or at least limp away from it, just know that your riding may need a bit of work.

That's going to leave a mark.

Ken has so many more words of wisdom! Check out many more of his podcasts on iTunes or on SoundCloud. You can also follow him on Twitter and Instagram.

This article was originally published June 21, 2016.