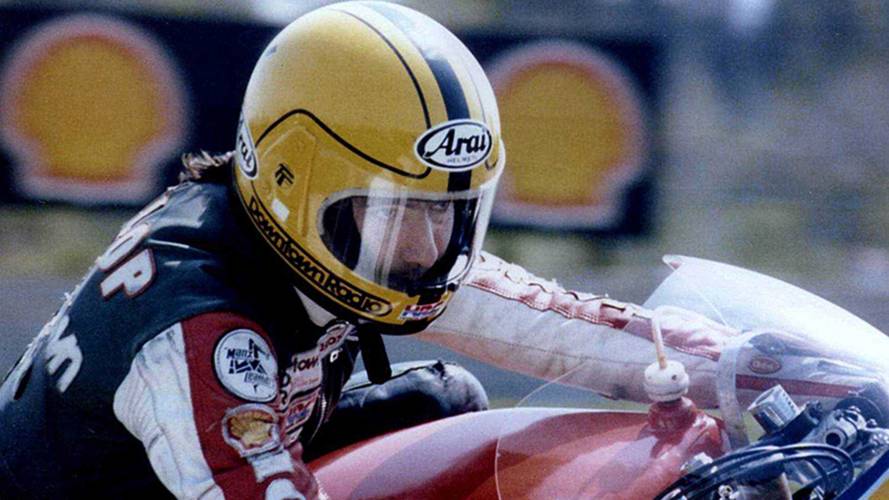 This documentary follows 2 generations of Dunlop brothers, and their careers racing bikes on the real road courses of Ireland and the Isle of Man.

The 2014 documentary, Road follows 2 generations of Dunlop brothers, and their careers racing bikes on the real road courses of Ireland and the Isle of Man. If you know real road racing, then you already know their story, and if you don't know about this sport, then you really ought to. The most amazing thing about the elder Dunlops is perhaps how long they were able to dominate in this young man's game, even after supposed career ending crashes.

Robert and Joey Dunlop at the 2000 Isle of Man TT

I don't want to ruin it for you, but in this very dangerous sport (SPOILER ALERT) both elder brother Joey and younger brother Robert lost their lives, in 2000 and 2008 respectively. What is amazing is that Joey managed to race competitively from the mid 1970s, until the turn of the century, and be competitive. Robert was younger and got a later start, then had a rear wheel disintegrate in a race, leaving him with all sorts of nerve and joint issues, yet still was fast enough to win at 47 years old. The movie follows their rise, and fall, and come backs, as well as the promising careers of William and Michael, Robert's sons. Don't let the last name fool you either, this is a family of truck drivers, pub owners, and tradesmen, not heirs to a tire fortune.

Jim, Joey and Robert Dunlop in the late 1970s

The whole Dunlop family originally comes from Northern Ireland, and motorcycle racing bacteria seems to be in the water there. Joey, his brother Jim, and their brother in law all got infected with the racing bug, as well as several family friends. Understandably, Northern Ireland is one of the few places where you can still race motorcycles, head to head, on barely modified street circuits. You are all familiar with the Isle of Man TT, well races like the North West 200 are head to head versions of that with packs of bikes going all at the same time. There are curbs, dips, bridges, telephone poles, stone walls, and every other civilized obstacle you can imagine, lining streets so narrow they would be one way only in the USA. Imagine your morning commute, or weekend errand running, only flat out on a race prepared bike, and you get some idea.

The film gives a good account of the rise of these original Dunlop racers, and their loses and travails along the way, then focuses on Robert's sons. There is spectacular footage of the various races, much of which we don't get since there is no big motorcycle racing TV deal in the states.There is also a great deal of interviews with the people that knew Joey and Robert, as well as long time sponsors, family members, other racers, and more. Of course, you do get to see all of the tragic crashes, but if you are watching this movie for that sort of thing, you should just go into your garage and knock your bike over right now. Not only were these guys some of the best riders anywhere, they were the true salt of the earth. In the off season, Joey would load up a lorry with food and clothes, and drive it himself across dangerous border to get to orphanages in Bosnia, Romania, and other war zones.

Obviously a man made of stronger stuff than most

It is hard to build tension in a movie, when you already know how it ends, and most motorcycle people know how this ends. Still, it is nice to hear some first hand accounts of what caused Joey's crash, riding a 125cc bike, in his third race of the day, at a track no where near as dangerous as the road circuits. Both the crash that should have ended Robert's career, and the one that ultimately killed him are explained as well. They both died doing what they loved, and that is the best way to go, in my opinion, not wasting away in a hospital bed without even the memories of the thrills you once knew.

The two young Dunlops, Michael and William, are carrying on the family business proudly, and seem to posses the rare combination of balance, reaction time, and near photographic memory needed to race successfully on these huge road based courses. It is a fitting tribute to their dad, and uncles that 2 promising riders are out there in the real road races with the name Dunlop. Robert even lived long enough to see them start their careers and race with them in some of the same events he and his brother had run.

RideApart Worth Watching: 100% favorable, and most likely greater than that from the audience, who suggest you watch it at least twice. If you like bikes and don't know this family and these races you need to sit down and get schooled, and this is a good way to do it. The movies TT3D: Closer to the Edge, and Joey Dunlop: No Ordinary Joe are a good education too.

Redeeming Quality: This movie is mostly redeeming qualities. Perhaps then we should mention what it could do without? It  could be a bit less chatty, I suppose. And it would be better if Joey and Robert hadn't died, but then it wouldn't be non-fiction.

Worth Noting: Yes, they speak English in Ireland, but if you want to understand what is being said in passing, when the subjects of the film aren't talking directly to the camera, you are going to need to pay close attention. The accents and dialects are thick, but your brain and ears could probably use a little exercise.

This is currently on Netflix, so it's free if you have the monthly subscription. That may be the only place to watch it right now, as I'm not finding an Amazon or Google Play link.