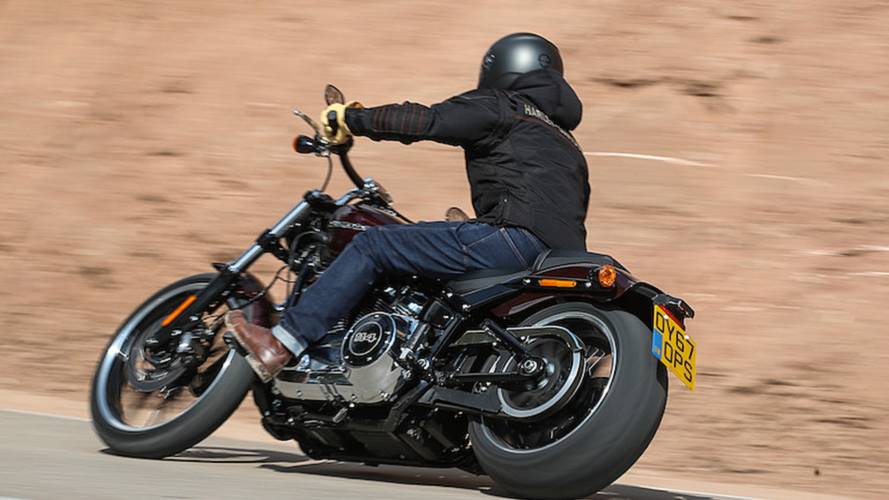 Back in spring of this year, despite the fact I had crashed one of its bikes on a Florida highway, Harley-Davidson equipped me with one of its Sully 3-in-1 convertible mesh riding jackets. Since then, I’ve worn it on a number of occasions and – I have to admit – I like it far more than I originally anticipated.

READ MORE: We Ride and Crash the Street Rod (Riding it Was More Fun) | RideApart

As the name implies, the jacket can be worn in a number of ways: in its full form with hooded lining, as a standalone mesh jacket, or you can remove the zip-on sleeves and wear it as a mesh vest. That last one is equal parts silly and pointless for motorcycle use, so let’s just call this a 2-in-1 jacket.

Don't wear it this way.

Priced at US $265, the jacket was made in Indonesia (No. 48 on the Democracy Index) and is available in sizes XS to 5XL. Sizes L to 3XL are available in tall cuts. The jacket can be purchased online via Harley-Davidson’s extensive gear and accessories website, or you can use the same site to help you find a dealership that has the jacket in stock.

“What?” I asked my wife, reading the look on her face when I showed her the Sully jacket. “I think it looks alright.”

“That’s because you’re old,” she said.

In a 2015 Cycle World interview, Harley-Davidson CEO Matt Levatich said the company’s core audience is white males 35 and up. That’s probably optimistic, and certainly different from the 47 and up range that former Chief Marketing Officer Hans Richer had offered Reuters just two years before. Average those two numbers out and you get a guy who was in college when the first season of “Road Rules” aired. Which, in my wife’s opinion (she was 10 at the time), is about when the styling of this jacket would have been on point.

I think that’s unfair, but I will admit the look is a little behind the curve. But, also, it is a textile jacket, and I think it’s hard to make those look good in anything other than adventure styling.

So, opinions will vary. I personally like the block letter “HARLEY-DAVIDSON” stitched across the shoulder blades, the massive Harley-style No. 1 on the shoulder, and the coaster-sized bar and shield badge on the breast. I mean, if you’re going to wear a branded jacket, why be subtle about it?

To give you a sense of how much I like the look of the Sully, I actually went to the trouble and expense of having it altered to fit better.

According to the Centers for Disease Control and Prevention, roughly 71 percent of the US adult population is overweight. Meanwhile, Harley-Davidson is quite possibly the most quintessentially American brand that exists – arguably more “American” than even Coca-Cola or McDonalds. So, it should come as no surprise that the cut of Harley-Davidson clothing is generous.

As one of the minority of Americans with a healthy BMI, the size L jacket suits my 6-foot-1 length well, but I had to get a tailor to cut away several inches of fabric in the chest and waist. Getting that done cost me £70 (about US $100). Tack that onto the jacket’s already considerable price tag and there’s no doubt the appeal of the Sully is… wait for it… sullied. But all was forgiven when I rode a few hundred miles with the jacket on the hottest day of the year.

It’s hard to beat a mesh jacket when the temperature rises. At pace, air makes its way to your arms and core, and riding on even the toastiest of days remains enjoyable. The fact the jacket – like 80 percent of Harley clothing – is black means you won’t really enjoy sitting still, but even then it’s more tolerable than doing the same thing while bedecked in leather.

I have my doubts as to how well the jacket would fare in a crash, but I have the same concerns about all mesh jackets. And it’s pretty basic logic that they’d still be more effective than wearing no jacket at all. I’m from Texas, I’ve been in plenty of situations where wearing a heavy leather jacket might present a health issue, so I see mesh gear as a reasonable compromise.

There are spaces in the shoulders, elbow, and back for armor but you will have to pay for said armor separately. If you’re buying the armor from Harley, you can tack an additional $85 to the cost of your jacket. But remember that riding armor is generally universal, so you can pull stuff from another jacket to be used here. I personally rely on a Knox Venture shirt, which fits snugly and better ensures the armor won’t shift in a crash.

There’s a zip-in hooded liner that blocks wind somewhat and turns the Sully into a jacket that functions well all the way down to the 20C/68F, possibly cooler for the aforementioned average American who carries more… ah… insulation than myself. On its own, the subtly branded hoodie is probably my favorite part of the Sully jacket. Comfy and equipped with button-closed side pockets, it has become a go-to article of clothing for me.

Attached to the inside of the sleeves are pull-out thumb-hook fingerless “gloves” made of a synthetic material thin enough to be squeezed into riding gloves. They make me feel like those women you always see knitting in coffee shops. Probably not the mental image Harley would choose, but there you go: badass and snuggle-ready. As John Burns pointed out in his review of the jacket on Motorcycle.com, you should expect this hoodie element of the Sully to frequently be stolen by your lady friends.

The hoodie is arguably the best part of the Sully jacket.

The jacket itself has six pockets, each with ample room to hold a phone or wallet. The two zippered side pockets are each voluminous enough to hold a 250ml bottle of water. The external breast pocket is also zippered, as are two internal pockets, one of which has a rubber port for headphones. A third internal pocket has no fastening.

The jacket is machine washable. If Harley’s sizing is not generous enough for you, there are zips on each side to extend the hipline even further. Subtle reflective piping on the shoulder is so subtle that I can’t help but wonder the point of it: if a driver is eagle-eyed enough that he or she will spot these tiny reflective surfaces, he/she will almost certainly also be able to spot the considerably larger adult male sitting astride a 700lb motorcycle who is wearing said reflective surface.

I’ll admit the price of the jacket stings a bit. Add in full armor and you’re looking at shelling out $350 (that's $265 for the jacket, $25 for shoulder armor, $25 for elbow armor, and $35 for back armor) for the privilege of letting people know that you like a thing everyone else likes. Whether that’s money well spent really is up to the individual rider; branded gear is a mysterious beast in that sense. Certainly it’s something I understand, though. I have a pair of Indian Motorcycle-branded boots that I wear all. the. time.

For the folks who go to Revzilla and search for jackets by sorting them in price low to high, then sticking to the first three results, branded gear will never, ever make sense. But those who factor fashion into their decisions should be able to relate; branded gear is an extension of that form of expression. It’s all a part of the emotional connection we feel to our bikes. And for some riders it’s a means of showing aspiration: I may not be able to afford the Harley-Davidson Road Glide I want, but I can wear the hell out of this jacket.

And, actually, over the past few months I’ve worn the Sully jacket quite a lot. It’s functional and comfortable (though, admittedly, part of the reason for that latter attribute is the fact I paid to have it tailored). Despite what my wife says, I feel kind of cool wearing it – literally and figuratively. And the versatile nature of the jacket means it’s an all-day piece of gear. Folks in the American Midwest will be able to relate to summer days that start with the need for a sweatshirt and warm to a T-shirt and shorts affair. This is a jacket that covers all the bases.

In summary, the Sully is a good jacket that costs a little more than it should and inherently requires that you be a fan of the Harley-Davidson brand. Conveniently, however, if you are a fan of the brand, you might not mind paying that premium.