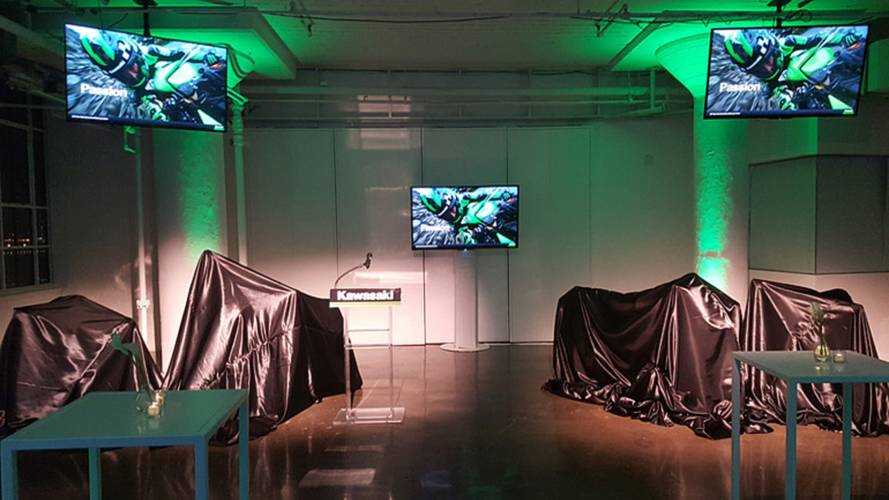 I went to New York to witness the U.S. reveal of Kawasaki's new bikes and lived to tell the tale.

That time Kawasaki sent me to New York to touch motorcycles

As soon as the embargo lifted, I sent a Facebook message to my pal Angela to tell her that I'd finally found her bike. See, for about a year and a half now she and I have been trying to find the perfect bike for her. She's new to riding, so she wanted something smallish and easy to control that she could commute on and maybe take out on the weekend for some light thrashing. We discussed all kinds of bikes – everything from Rebels to old KZ400s to Royal Enfields – but nothing really stuck. There was always one issue or another – or in the case of Enfields several issues – that made each bike a non-starter. That all changed when I sent her the following picture with the message, "I'm hanging out with your new bike this morning."

This is my "I'm too cool to smile" face. I'm actually very excited about the little Ninja.

That, my friends, is the new Kawasaki Ninja 400, one of four fantastic new bikes that Team Green just announced. What was I, a dyed in the wool Yamaha man and noted sportsbike disliker, doing on a Ninja 400? Why was I excited about it? Why do I think it's the perfect bike for Angela? Well, that's what I'm here to tell you about.

At the end of October, Kawasaki invited me and a handful of my colleagues to attend the International Motorcycle Show for the U.S. reveal of four new bikes – the Z900RS, the ZX-10R SE, the supercharged Ninja H2 SX, and the Ninja 400. The fact that these bikes had already dropped at the Tokyo Motor Show and EICMA 2017 was neither here nor there. Kawasaki was throwing a U.S. release party and we were invited. So I packed up my best jeans and western shirts, polished up my Sunday-go-to-meeting boots, and flew to New York to touch some motorcycles.

The view from my window.

First on the agenda, after checking into my swank hotel on Herald Square, was the Kawasaki media party. I showed up in the hotel lobby around six and met the other journalists who Kawasaki invited, a group that included Jenny Smith from Rider Magazine, Rennie Scaysbrook from Cycle News, the legendary John Ulrich of Roadracing World, and John Flores from Roadrunner. Eventually, after a few minutes of small talk and catching up, Joslyn from Kawasaki arrived and we set off for the party.

The media party was held at a place called Canoe Studios down by the Hudson River. It's a sort of multi-use studio rental/events center with a very post-industrial loft feel. Lots of exposed pillars and bright white paint and giant factory windows. The party itself was pretty cool. The big studio space was lit primarily by bright green LEDs and a handful of strategically placed spotlights illuminating the bar, the spread of meats, cheeses, fruits, and vegetables that made up dinner, and a podium flanked by four tarp-covered bikes. One wall was all windows and gave a killer view of the Hudson River and Midtown. Music was provided by a pretty good DJ, and the room was generally lively as moto journalists and Kawasaki people drank and mingled.

Now, here's the thing. I'm not generally a big fan of sportbikes, and I've never been much of a Kawasaki guy. I mean, I appreciate a good sportbike as much as the next bike nerd, but they're not really my style. As for Kawasaki, well, I'm sure they're fine but they're no Yamaha, you know? Also, I'd already written about (or edited stories about) these bikes so I had a kind of "been there, done that" attitude when I showed up. That all went out the window when the main event started.

It started with some remarks from some Kawasaki bigwigs about what Team Green had been up to during 2017, including some stuff about ATVs and side-by-sides which was outside of my purview. After that, Kawasaki U.S president and CEO Yoshi Tamura (who is a super nice guy, by the way) came out to talk about how excited he was about the new bikes. By this point the crowd was getting restless – the bikes were right there but we couldn't see them – so they brought out World Superbike Champion, Team Kawasaki rider, and all around cool dude Tom Sykes to help with the unveiling.

Tamura-san teases us with new bikes hidden in plain sight.

Once the bikes were uncovered, we were set loose to take our pictures and paw over them and man, these things were gorgeous in person. Each one had a certain something that drew the eye and made me want to know everything about it.

The supercharged Ninja H2 with its little brother, the Ninja 400.

Of the four, the little Ninja was my favorite. I'm a sucker for small displacement bikes, and this little guy pushed all my buttons with its stance, its looks, and the sheer sense of fun it seemed to exude. The Z900RS has an amazing presence up close, especially with the extremely 70s root beer and orange metal flake paint job. It does a great job of paying homage to the Z1 without being slavish or overbearing about it. The blown H2 Ninja is straight-up bonkers, and I love the fact that there are only two colors available on the H2, and both are straight-up, super glittery bass boat paint jobs. As for the ZX-10R SE? Well, it was certainly the purest sportbike there, and I liked its aggressive stance, but that's about it. Honestly, I was so taken by the other three I hardly paid it any mind.

Our swag from the media party. Honestly, the label was better than the champagne.

After a few hours of shmoozing and talking about bikes – and drinking the bar completely out of Brooklyn Pilsner – I picked up my coat and my complementary swag (a cute mini bottle of champagne) and headed out. Instead of taking a car, John Flores and I took a pleasant walk back to the hotel through Manhattan. New York at night is pretty nice, and John and I had a great conversation that encompassed bikes, writing, family, and how frustrating Detroit can be. Once back at the hotel, I wrapped up some work, took one last look at the Empire State Building, and called it a night.

The next day, Friday, was the International Motorcycle Show. I got up early and rolled down to the Javits Center with Joslyn. I got my press credentials and headed to the free press breakfast in the Progressive Lounge area. The lounge area was... well, it sure was something. There was a stage, some custom bikes up on stands, a whole barber shop, and some other accoutrement. I think Progressive was trying to create a space like The House of Machines, but it felt awful prefab and kind of tryhard there in the convention center.

Tom tells us how much he likes the ZX-10R SE.

After some bagels and a cup of surprisingly good coffee, I headed to the Kawasaki booth for a 9:30 press gaggle. The Kawasaki guys rode the bikes out one by one, and gave us a much more detailed presentation on each model. The bikes looked great in (slow) motion, but I was really surprised at how quiet they were. The Ninja 400 sounded like a sewing machine, which wasn't really a surprise, but I expected something more aggressive from the Z900RS and the H2.

The H2 looks pretty good with its hard bags.

Speaking of the Z900RS, for its presentation the company brought out a mint '73 Z1 with damn near the same brown and orange paint job as the new model. Know how I said earlier that the Z900RS has a real presence up  close? Well, so does its predecessor. Kawasaki did a phenomenal job recreating not just the look of the OG Z1, but also the feel. The new bike isn't just some cheap cash-in on the retro bike craze, not in my opinion at least. While it pays homage to the Z1, the Z900RS is its own thing – a well-built, very handsome modern standard bike – and it does a great job carrying on the Z bike tradition.

After the Kawasaki presser, I had the rest of the day to myself to wander around the show. I took advantage of the time to shake a bunch of hands, write a bunch of words, drink a lot of coffee, shoot a lot of pictures, and generally immerse myself in bike nerdery. I spent a while at the Yamaha booth (obviously) talking about triples and getting some solid leads on RD200E carbs. I also spent a good hour with Matt from Ural about the company's bikes, its, shall we say, checkered past, and its plans for the future.

Look at the size of that antipasto.

After the show, I joined Joslyn, the Johns, Jenny, and some of my new Kawasaki pals at a fancy-schmancy Italian joint called Carmine's just off Times Square. We ate like Roman emperors and finished the night with a cheesecake (yes, a whole cheesecake) and a bottle of Sambuca that just mysteriously showed up on our table. Afterwards we all walked through Times Square, gawked at the lights, then headed back to our hotels.

Saturday morning was my last in Manhattan, so I spent it having breakfast and souvenir shopping for my kids. I like New York a lot, but after two and a half days I was ready to be home. I had a late flight, and finally got home just in time to tuck the ladies in and have a drink before I fell asleep in my office chair. Mission accomplished, I'd say.

All in all, it was a pretty successful trip. I got my mind changed about sportbikes in general and Kawasakis in particular, and I'd even go so far as to say that there are now two Kawasakis I'd allow in my garage. Okay, well, in the driveway at least. Kawasaki put on a good show for us and treated us well, and it was nice to get away and finally meet some people for once. Oh, and as for Angela and the Ninja 400, I'll be sure to let you guys know.

PS: Check out some of the sweet bikes I saw at the show below!