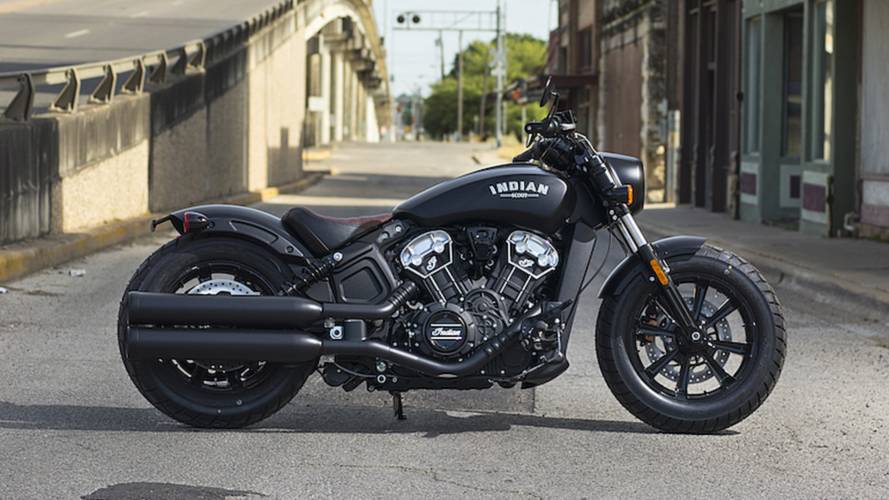 Indian Motorcycle has pulled the cover off the new Scout Bobber – a sexed-up version of its popular Scout model aimed at a younger audience.

“We know that in order to expand in this market we gotta go younger,” said Indian Vice President of Motorcycle Marketing Kevin Reilly. “We gotta go more badass.”

I’ll be riding this machine soon, with a full first ride report hitting RideApart on either Monday or Tuesday. Until then, here’s everything we know about the new model.

Effectively, the Scout Bobber is a cosmetic exercise, transforming the Scout into something with a look that better reflects its fantastic powerplant. The Scout’s 100-horsepower 1130cc liquid-cooled V-twin has always been the star of the show and remains as much here. Unlike the Triumph Bonneville Bobber however, the engine has not received a special tune for this variation on the theme.

“Tracker” handlebars, pegs moved 1.5 inches closer to the rider, and a suspension that’s been lowered an inch (chiropractors rejoice) all contribute to a machine with new, more aggressive ergonomics. As has been requisite since 2009 when making bikes targeted at younger riders, many of the features have been blacked out: wheels, engine bits, pipes, etc.

A new block letter logo adorns the tank, and a cool headlight nacelle fixes what was previously my biggest aesthetic complaint about the bike. Meanwhile, the standard two-tone seat is markedly more attractive than that found on the Scout and Scout Sixty (Statements on the look of the bike are obviously my own opinion. Feel free to disagree in the comments).

Chopped fenders front and rear ensure you’ll fling plenty of road muck on wet days. Chunky stock tires are still Indian-branded shoes from Kenda, which probably means you'll want to replace them ASAP if there's even the remotest possibility of your riding in the rain. New rear LED lights with integrated stop, turn, and tail signals help the bike maintain its minimalist styling.

Indian has rolled out a host of accessories aimed at allowing riders to make their ride even more their own, and most existing Scout accessories will also work with the new Scout Bobber. I am particularly fond of a spoke-wheeled model with ape hanger handlebars that Indian displayed at its unveiling party in Minneapolis on Friday.

One thing you can't really see in the photos, but which I can tell you from having ogled the bike in person, is that overall quality of the fit and finish has been stepped up. The existing Scout is certainly no slouch but the Scout Bobber is a vehicle even more befitting its price tag and heritage.

For those of you playing along in Europe, I’ll look into availability there; be sure to check out my full ride report next week.