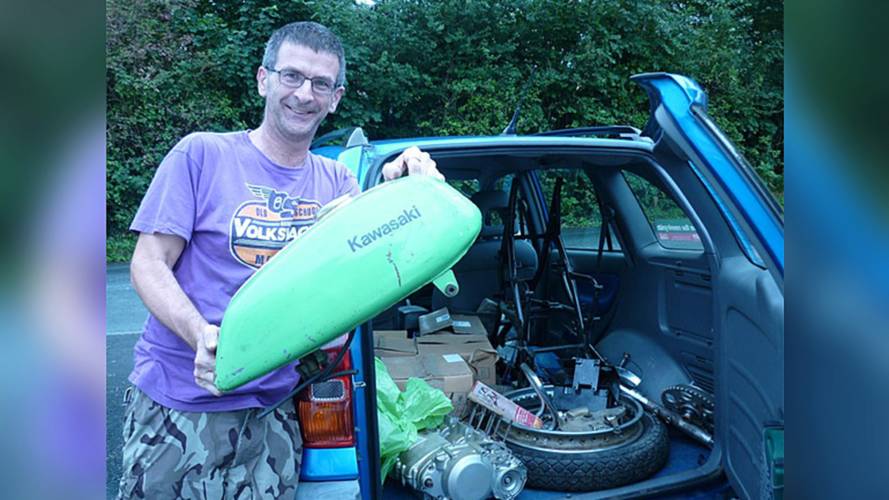 An Englishman bought a shed full of used bike parts and build a pristine Kawasaki H1 from them.

Among those poor souls with an affinity for lost causes, the Kawasaki H1 500 triple holds a special place on the mantel in the two-stroke hall of legends. While 60 horsepower sounds anemic today, when the triple came on the pipes around 5000 rpm, things accelerated quickly. Housed in a chassis that was limp compared to the thrust (It handled like a puppy on linoleum -Ed.), the H1 created more personal injury stories than perhaps any motorcycle before or since. So of course, in 1972, Kawasaki came out with the 750cc H2.

Having witnessed more than a few surprise wheelies, and ridden in proximity to these bikes on racetracks, I can affirm that most of the horror stories are true. None of that mattered a bit to Dave Riley, who already had an H1 but lusted to build one in the flat track style. Recently he came across a pile of parts that had been sitting in a shed for 17 years, and his project was born.

After finding that the previous owner had tried to weld a broken piston, Riley sent the good parts out for cleaning, had the engine bored, ordered a new crankshaft, got the frame powdercoated, and started on the restoration saga of a lifetime. The forks were rusted beyond saving, but Riley found one in the US that was just right. The seat came from Redmax, and the Electrex racing ignition and LED lights operate on a total loss system, so the battery must be kept well charged.

“I've always liked the look of flat trackers so I thought I’d have a go at building one,” Riley said to Motorcycle News. “I had a basic vision of what I wanted to achieve but wasn’t entirely sure if it would work.”

From our perspective it appears to have worked out quite well. We’re not so sure that the bicycle horn will provide sufficient warning to motorists or pedestrians, but removing a hand from the handlebar of an H1 is not recommended in any case.