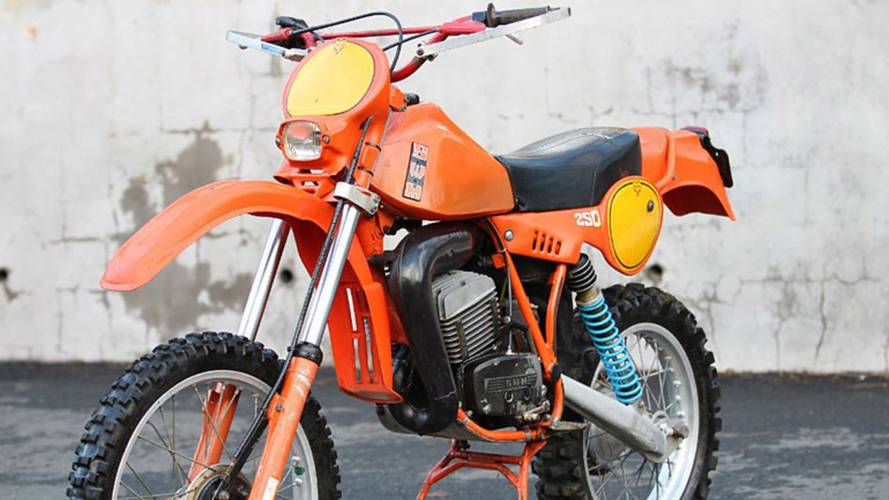 SWM is an acronym for one of the greatest names in motorcycling history - Speedy Working Motors. They built a series of off-road bikes, and one of the most popular was the RS250GS.

SWM sourced the engine from Rotax but they built the frame, exhaust, tank, and seat in-house. What resulted is a very Honda-like bike in appearance with a full factory feel on the track. For more information on this bike, check out this write-up on Old Knobblies.

This example (VIN: 140269) is claimed to be a "very nice, very original, unrestored survivor." The top end has a rebuild with very low hours and it's ready to be one of the coolest competitors at your local vintage enduro race! Find this SWM for sale in Vernon-Rockville, Connecticut with bidding up to $1,567.89 or a BIN of $3,500 here on eBay.

With a bike that's as popular as the Suzuki SV650, it might be a bold claim to say this is the best looking example I've ever seen. But that's how I feel - this thing is just plain cool. The SV650 is fairly ubiquitous because it's an excellent mid displacement sport bike tha is well recommended as a first bke for aspiring riders. This example was built to be a track bike that was street legal, which is why it has a tiny headlight and taillight as well as a bar end rearview mirror.

Since it was built it has just 1 track day on it. The cosmetics aren't perfect but the bike has 23,000 street miles on it and it's claimed to run strong. Aftermarket extras include a Yoyodyne belly pan, GPR steering stabilizer, shortened Yoshimura RS3 slipon exhaust, stainless steel brake lines, Galfer brake pads, Traxxion Dynamics front forks with emulators, Ohlins rear shock with Penske spring, and more.

A Bike-urious reader picked this bike up several months ago but he's just acquired a Husky 701 Supermoto and he needs room in his garage. He's made some upgrades for better street legality (turn signals/lights) and it's now for sale in Bloomington, California for $2,900 here on Craigslist.

In 1987, businessman Les Harris brought back the iconic Matchless G80 - which was originally built between 1946 and 1966. Harris had already demonstrated success with resuscitating the Triumph Bonneville, and then he tried his hand with this model. The "Harris G80s" were launched in 1987, and the components were interesting. 497cc Rotax single (with a left side kicker), Paioli suspension, Dell'orto carb, Lafranconi exhaust and Brembo brakes.

It used an oil-in-frame design and was offered in silver, black, or the metallic burgundy that you see in front of you. Sales weren't great and it went off the market in 1990 after just 865 bikes were sold. For more on the Harris G80, check out this profile from Real Classic. Or if you want to learn more about Harris in general, check out this profile on The Vintagent.

This example has just 10 miles, and according to the seller it has never been ridden or had gas in the tank before. 10 miles seems like an awful lot for a motorcycle that has never moved under its own power, though. Find this Matchless for sale in Coldwater, Ontario, Canada for $5,646 here on Kijiji.

Mecum is hosting a gigantic auction in Las Vegas in a few weeks - nearly 900 bikes will go up on the block. Here's one of my favorites. This is number 82 of the original 401, and Mecum says that it is one of just 10-20 left with original paint. It’s been with the same owner for the last 25 years and it comes with the original brakes and tires. It’s been signed by Paul Smart, Cook Neilson, Jon White and Reno Leoni.

Built by Moto Rosso Motorcycles, this lovely Suzuki started as a first-gen Gixxer and has evolved over the last five years into a stunningly modified example with a Slingshot motor and the styling from the iconic Limited Edition.

The seller includes an excellent build thread here on his site, though the highlights include a 811cc Slingshot engine from a second gen GSX-R - it's good for 113 horsepower at the rear wheel. The seller tried to utilize as many Suzuki and Yoshimura parts as possible. Ari Henning of Motorcyclist Magazine took it for a spin and lapped Auto Club Speedway in 1:41. Find this 1st gen Gixxer for sale in Costa Mesa, California for $16,000 here at Moto Rosso.