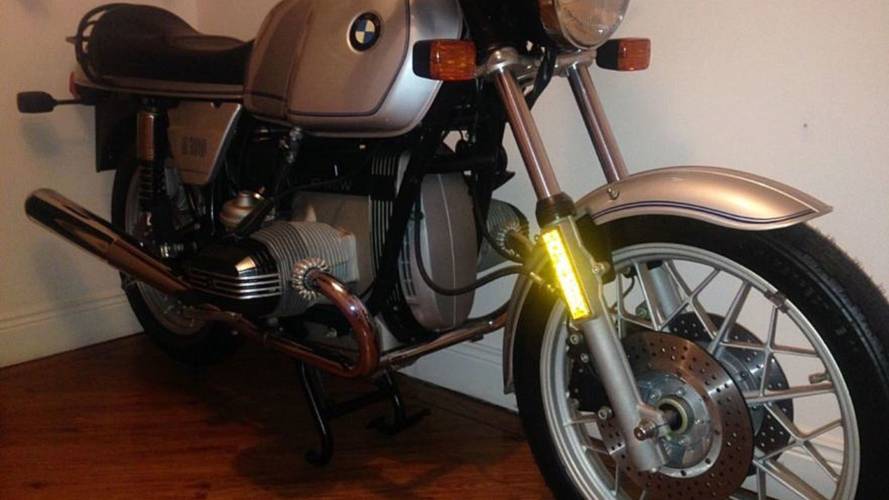 Bike-uriosities brings you a selection of unique bikes that range from the El Burro, Gezzi & Brian Furia, HD XLA and BMW R100 to the curious Bimonkey.

This BMW R100 was not taken out of its crate until 1996. While it has been registered, this bike has never been started or had fuel in the tank.

The seller has it on display at his/her home and says it is basically a brand new, 34 year-old motorcycle. The sale comes with the unopened tool kit, tire pump, and first aid kit, as well as the factory lock. It also comes with some pieces of the original crate. The odometer shows 1 mile.

Find this basically still new R100 for sale in Swansea, England with an asking price of $12,295 here on eBay.

Ghezzi-Brian is another one of those companies that take an existing bike or powerplant and make it something special. Think of the Rickman Brothers building frames for Triumphs, Hondas and various dirt bikes, or Bimota using stock engines and building exotic specials around them with top-shelf components. Ghezzi-Brian's specials were primarily built around Moto Guzzis.

After the success of their first bike, the Supertwin, they turned to the naked bike category. The result was the Furia. The Furia is built around the 1064cc engine from the V11, with a 5-speed gearbox vice the V11's 6 speed. Roland Brown, in a review from the Telegraph in 2002 described the unique feature of the Furia:

"The Furia's key feature is its chassis, especially the frame designed by Ghezzi. It is identical to that of the Supertwin, which means it's based on a steel spine that doubles as the airbox, rather than as the oil tank in normal Guzzi fashion. Air enters under the large fuel tank and exits to the engine via frame sections that jut out on either side, near the swingarm pivot. Oil is held in a separate tank near the steering head.

Evidently the seller of this bike was a dealer, and this was one of the first Furias to come to the US. With only 5,990 miles, it is in excellent condition. The listing only shows these two photos, so I would ask for more, but this is a very rare motorcycle, one you will not see coming the other way on the Dragon. It can be yours for $16,000. It is located in Mathews, Virginia here on Craigslist.

The full name of this little scoot is actually "El Burro Sand-n-Sno Bike." Obviously it would handle pavement with no problems, but the idea was that you could air down the tires to 1-2 psi and the 12-inch wide tires would create enough of a footprint to get around in sand or even on snow.

El Burro was built by Worth Industrial Processing Company of Lexington, Michigan. The first version had a 5 hp motor but that was too slow, so Worth added a 8 hp Briggs & Stratton motor with a centrifugal clutch soon after. The "big" motor was capable of getting El Burro up to 24 miles per hour. For more info on El Burro, check out this previous article on RideApart.

One of the rarest motorcycles that Harley-Davidson motorcycles ever built, the XLA was produced in response to a request from the US Government for a patrol bike. Just 418 were sold, and according to the seller this is one of the final 30 because '72 was the last year for the XLA.

Harley started production of XLAs in 1957, and as you'd expect it was fairly similar to the civvy XL. Changes included larger fuel tanks without HD branding, Firestone tires, enclosed shocks, wider handlebars, and a few other pieces that were optional on the XL. For more information on this rare Harley, check out this write-up on the XLA from Riding Vintage. According to the seller, this is possibly one of one example built for the Navy, who specified an example with no chrome. He says he's got some documentation to back up these claims, and I'd definitely be taking a close look at them before pulling the trigger.

This example (VIN: 4D52301H2) is now claimed to be museum quality thanks to a year long restoration that included over $20,000 in parts. It's now said to be just like it came out of the original crate. I just wish there was a photo of what this bike looked like when it was new. If you want to do a little more research, you can start by finding this XLA for sale in Walnut, California with bidding up to $18,200 and the reserve not yet met here on eBay.

Honda's Monkey bike (known the world over but sometimes with a different name) is one of the most notable motorcycles ever built. Between '87 and '88, Honda built a RT variant which was only available in Japan. According to the seller, approximately 40 of those RT bikes were converted to these adorable little replicas of the Bimota DB1 called the BiMonkey.

The seller says 40 units were built, but I can't find evidence of another one or who built them. In this thread (started because the seller was trying to sell the BiMonkey and a DB1 as a set last year), someone says that this is the 2nd one they've seen (here's a possible photo of it), for what it's worth. They also say that the bike has a 80cc engine, though the original Monkey came with a 50cc unit.

Find this BiMonkey for sale here at Raider Moto for $6,013 in Coffs Harbour, Australia.

Which would you put in your garage? Leave a comment below!