Cycleweird: The Worst of All Worlds - Suzuki RE-5 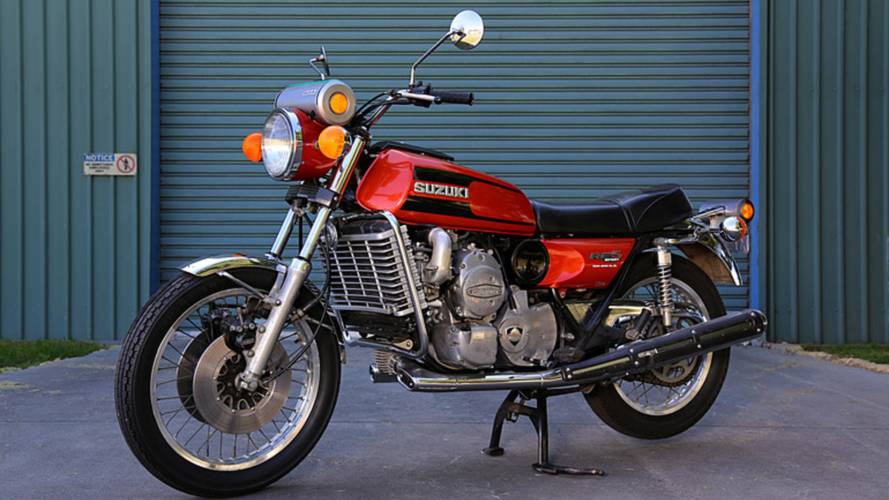 Too hot, too heavy, too expensive, too weird, and too cool.

Remember rotary-powered motorcycles? That's okay, hardly anyone does these days. Way back in the late-60s and early-70s, the Wankel Rotary Engine suddenly became the thing in both automotive and motorcycle circles. Mazda started the craze way back in 1967 when they released the Cosmo, and pretty soon the House of Zoom was trying to stuff rotaries into everything they made – with mixed results. Numerous bike makers caught the bug as well, and throughout the 70s and 80s just about everyone tried their hand at making them. Most, like Yamaha's RZ201 and the X99 RCE by Kawasaki, never got out of the prototype stage. Others, like the Hercules W-2000 and the various flavors of rotary-powered Nortons found modest success among discriminating riders. Today's Cycleweird entry is one of the latter, a machine both ahead of its time and an apocalyptic commercial failure—the Suzuki RE-5.

UPDATE: Turns Out This Cool Vincent Lawn Mower Might Be Hot

Before we jump into the bike proper, let me give you a little primer on rotary engines and why everyone thought they were the future for a while. The first rotary engine was designed by a German engineer by the name of Felix Wankel. First patented in 1929, Wankel didn't develop the engine fully until the 50s when he worked for auto and motorcycle maker NSU. A working prototype of the engine was unveiled in 1959, and in 1960 NSU started licensing the design to automotive, motorcycle, and aeronautical companies all over the world.

Behold the mighty Dorito! The guts of Wankel's first operational rotary engine showing the rotor, the housing, and the apex seals.

Instead of pistons, valves, and other bits we might recognize in our trusty Honda inline four or Yamaha triple, rotary engines make power with a triangle-shaped rotor that rotates eccentrically inside an oval housing. The rotor housing is a combination cylinder and combustion chamber, and engines can have one, two, or even three rotors. Rotor and housing lubrication is taken care of by a total-loss system fed by a bespoke oil tank. Fuel and air come in the intake, and as the rotor turns it compresses the mix, then whisks it out of the exhaust. Special seals called apex seals at the tips of the rotor keep the fuel-air mix and exhaust gasses moving efficiently through the housing.

If you watch the gif below carefully, you'll notice that a rotary produces power a little differently than a reciprocal engine. In a typical four-stroke piston mill, each cylinder produces one power stroke per two turns of the crankshaft. In a rotary, you get one power stroke per turn of the crank, or three power strokes per turn of the rotor. This not only produces more power compared to a reciprocal engine of similar displacement, but allows the engine to rev higher and produce power over a wider range.

Sounds great, right? Well, yes and no. On the up side, rotaries have a number of supposed advantages over old-fashioned reciprocal engines. They're compact, light weight, have fewer moving parts (valves, cams, etc.) and possess an extremely favorable power-to-weight ratio – typically more than one horsepower per pound. On the down side, they're finicky, high-maintenance, consume internal parts like apex seals at an astonishing rate, and produce ridiculous amounts of heat. On the whole, it's cheaper, easier, and safer to both build and run good old piston engines Despite numerous companies trying to make rotaries a thing for about thirty years, they never really caught on. Rotaries are, while extremely cool, largely an answer to a question no one was asking.

Now that you hopefully understand the rotary engine a little better, let's talk about how Suzuki tried to remake the face of motorcycling with one. In the early-60s, a Suzuki engineer named Shigeyasu Kamiya began planning a rotary powered bike that would be the company's top of the line product. Research and development continued throughout the rest of the decade, and Suzuki licensed the Wankel design from NSU in 1970. After two years of engineering and two more years of prototype testing, the first RE-5 rolled off the assembly line in 1974.

The engine that Suzuki designed for their new halo bike was a single rotor, 497cc Wankel that put down just over 60 horsepower and about 55 foot pounds of torque through a standard five-speed gearbox. The rest of the bike's running gear – frame, suspension, wheels, brakes, etc. – was high-end Suzuki parts stock like you would find on any other bike of the day. It had twin discs in the front, a drum brake in the rear, standard controls, hydraulic forks, and twin rear shocks.

It was smooth, but it was also fiddly.

Suzuki was so proud of their new bike that they hired Italian industrial designer Giorgetto Giugiaro to style it. Taking cues from the spheres and circles on the engine, Giugiaro designed a, uh, unique cylinder-shaped "tin can" instrument cluster for the clocks and indicator lights and a matching cylindrical tail light to perch on the rear fender. He then spread circles liberally around the rest of the bike and called it a day. It's not bad, but it's definitely an acquired taste. It was also offered with an optional touring package that included a full fairing, saddlebags, a luggage rack, a locking trunk, and other assorted touring goodies.

The infamous tin can instrument cluster.

At its launch, the RE-5 – which was sponsored and endorsed by no less than American astronaut Ed Mitchell of Apollo 14 fame – got a ton of good reviews from the motorcycling press. They praised the handling and ground clearance, and in the January 1975 issue Motorcyclist Magazine declared it the best handling Japanese bike on the market and close to European standards. The honeymoon didn't last long however, and pretty soon the other shoe dropped for poor Suzuki.

After the initial excitement wore off, it became clear that the RE-5 suffered from a number of serious problems. The main problem was that Suzuki stuffed the bike full of redundant and advanced systems – both to control the engine and, as far as I can tell, simply because they could – that increased both its weight and mechanical complexity. It featured both liquid and oil-cooling systems to help regulate the prodigious heat that the engine produced. A double-skinned exhaust system and an extremely fiddly header that featured both cooling fins and forward-facing vents reduced the exhaust temp to something near reasonable.

A closeup of the RE-5's header.

Then there was the ignition system. The bike had a CDI, but despite having only one spark plug, the RE-5 featured two separate sets of vaccuum and RPM actuated sets of ignition points. Since it used so much oil, the RE-5 had three separate oil reservoirs – one for the sump, one for the gearbox, and a total loss tank for engine lubrication – and two oil pumps, one for the main bearings and one to lube the apex seals.

The carburetor was more like a unit from a rotary-powered car than something you'd find on a motorcycle, and was overly complex. The throttle controlled not only the carb, but also a valve in the intake manifold and the oil supply for the combustion chamber. No less than five cables were controlled by the throttle grip, which is honestly a ridiculous number.

It was also, unfortunately, a poor performer. Despite the mighty rotary engine, the RE-5 was slower and less powerful than its GT750 cousin – a bike I covered in my article about great triples. It also vibrated like crazy above 4,000 RPM which is, you know, less than ideal.

Still a great looking bike despite its faults.

Bad press poured in throughout 1974, and in 1975 Suzuki released an updated A-model with more traditional styling and some upgraded ignition bits. Despite their best efforts, Suzuki couldn't overcome the bike's nearly insurmountable issues and it was discontinued in 1976. A decade later, our friends at Cycleworld criticized the RE-5 as expensive, over-complicated, underpowered, and hideous. Then, to add insult to injury, they declared it one of the ten worst bikes ever made.

By the end of its production life, roughly 6,500 RE-5s were produced spanning both models. You can still find them around if you look hard enough, and they're not very expensive despite their limited numbers and weirdo powerplant. As cool as they are, and I think they're super cool, I don't think I'd own one myself. They're nice to look at, and apparently fun to ride, but I'll stick with my pistons and cams, thank you very much.