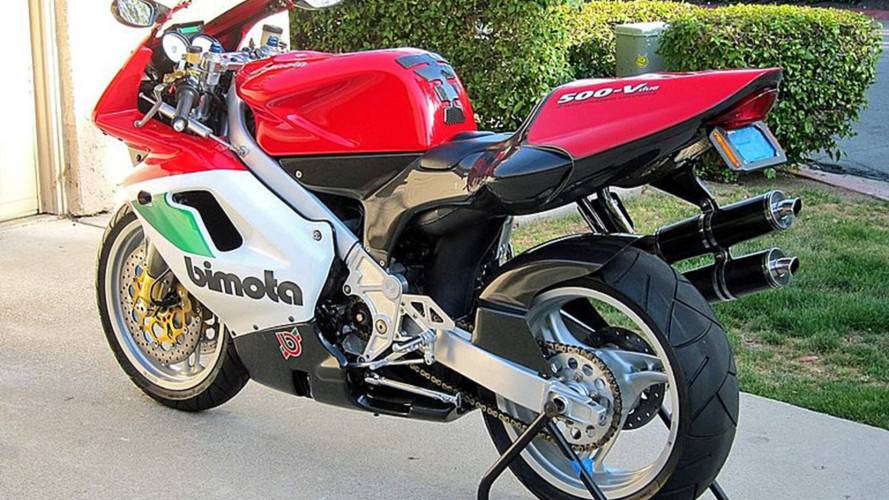 This week's Bike-curiosities include a Bimota V-due, a beautiful Indian V-Twin, Pembleton three wheeler and a restored BSA WM20 from world war II.

The V-Due is one of the most interesting things that ever came out of Bimota. It came out to tremendous fan-fare as the first two-stroke with fuel injection - yielding a greater power to weight ratio than anything else available on the market. But the fuel injection was awful, and the bikes were incredibly difficult to ride. Combine that with a large number of seized engines, and this bike was an unfortunate disaster. That's what makes this bike special - it's one of "three known V-Dues that reliably run on direct injection".

Though the execution was utter garbage, the theory behind this bike was incredible. At a time when everyone else was moving away from 2-strokes, Bimota wanted to release an absolute world beater. They were going to get around some of the emissions issues by utilizing fuel injection, and it also featured trick components like a dry clutch and race-inspired cassette transmission. But then the public actually got a chance to ride it, and as Visordown put it, "Within 200 yards it became apparent to most UK testers that the V-Due was virtually unrideable." This bike is worth learning more about - but I'll defer you to OddBike for a fantastic article explaining how this bike "killed" Bimota.

According to the seller, this bike has been gone through so that it runs like Bimota originally wanted it to. However, the electronic odometer apparently resets itself? It currently shows 579 miles, 110 of which came from the current owner. But the original owner claims to have done 1,200 miles in one weekend. It's a weird flaw and a weird story, but sadly with Bimota's reputation for this bike it's almost believable. The seller will include all the original parts, factory stand, original brochure, and a cover.

Earlier in the year, this Bimota was up on eBay but it was pulled off because the bike was "no longer available." Now it's back up for sale with a hefty asking price of $35,000 here on Craigslist.

This bike is being sold by none other than Paul d'Orleans - The Vintagent. There can't be many better people to buy a motorcycle from. Based on the Norton Dominator the 1959 Norton Nomad was an entirely for export (North America) model that was aimed at the off road market. The off road market was almost entirely in the hands of the British manufacturers. Husqvarna was just getting started and Bultaco was formed in 1958. The Japanese were not any sort of factor in the genre. Norton’s Nomad was aimed at expanding that domination to North America.

The 1959 Norton Nomad 600 used a 597cc air-cooled four stroke parallel twin that produced 36hp. A unique frame with single down tube and tubular cradle for the motor, full width alloy brake hubs at both ends, lightweight swing arm and Roadholder front forks made the Nomad pretty capable in the day. The Nomad claimed an impressive eight inches of ground clearance.

This particular 1959 Norton Nomad (VIN # 82812 R15) is in San Francisco, California. Listed as an original survivor, the listing has an incredibly detailed history of the bike. It was bought at the Quail Motorcycle Gathering, and the pedigree seems impeccable. The Nomad is currently standing at under $4,500 and reserve not yet met with a Buy It Now price of $22,000 here on eBay.

This is one of three British bikes in full ex-war livery that are on offer from the Wayne Hamilton Triumph Collection in Apache Junction, Arizona. There's a Norton WD 16H, a Triumph 3 HW, and this BSA WM20. The BSA WM20 was initially criticized for unreliability issues but evolved into a machine that was considered extremely reliable. So much so that it continued in service in the British Army into the 1960’s. Over 125,000 of the 496 CC side valve units were sold to the British Armed Forces.

This BSA is listed as having been restored six years ago, and not started since. Current price is $4,050 with reserve not met here on eBay.

1912 was a very good year for Hendee Manufacturing Company of Springfield, Massachusetts. So good that the Indian brand would sell 32,000 units in 1913 to make them the largest manufacturer of motorcycles on the planet with control of 42% of the US market. The company officially changed it’s name ten years later in 1923 when it became known as the Indian Motocycle Company.

There are a surprising number of 1912 Indian motorcycles in existence, not the least of which is in the museum at Yosemite National Park. In 1914 Robert F. Baker rode his 1912 Indian into Yosemite and was stopped by rangers as motorcycles were illegal inside the boundary of the park. Two years later, when Baker went to the Army he dismantled his beloved Indian and put it in several boxes so his mother couldn’t easily sell it when he was away. Decades later, he assembled the bike and donated it to the park in the early 1960s.

The 1912 Indian came in four different models. A single and a V-Twin both available with or without a transmission. The 1912 Indian V-Twin used a 988cc (61 CID) air cooled V-Twin with an intake over exhaust valve system that produced a top speed over 50mph.

This particular 1912 Indian V-Twin (VIN# 76D554) is in Ojai, California and is listed as professionally restored with an AMCA judging of 97.7 and full documentation of the restoration process. Said to be restored from a complete bike, not patched together from parts. The Indian has a Buy it Now price of $62,750 here on eBay.

Pembleton Motor Company is based out of the UK, and they build replicas of "the classic 1920s cycle car." In their words, "the Pembleton can meet the demands of todays motorists while providing all the exhilaration of a vintage sports car." They offer both complete builds and kit cars that accept Citroen, Moto Guzzi, or BMW motors. The seller says this is just one of three examples in the US, and it's powered by a 750cc Moto Guzzi engine.

Depending on the choice of motor, the Pembleton can way as little as 660 pounds. Fans of Colin Chapman know this means that it doesn't need exceptional power to be fun. Thanks to that light weight, the range of motors yield power to weight ratios of 90-300 horsepower per ton. Pembleton makes both three and four wheel vehicles, but the four wheelers don't qualify for consideration on Bike-urious, right?

This example (VIN: FLA65677) was originally powered by a Citroen 2CV motor, though it now has a modern Moto Guzzi Breva motor (good for 47 horsepower). The 2CV transmission was retained. The complete package weighs 910 pounds. Upgrades from the stock bike include a detachable steering wheel, brass headlights, stainless steel headers, rear disc brake, and custom 19 inch front wheels. Since the kit was put together (by the seller) in Florida, it has about 3,000 miles.

Find this Pembleton for sale in Daytona Beach, Florida with bidding up to $5,323 and the reserve not yet met or a BIN of $11,000 here on eBay.