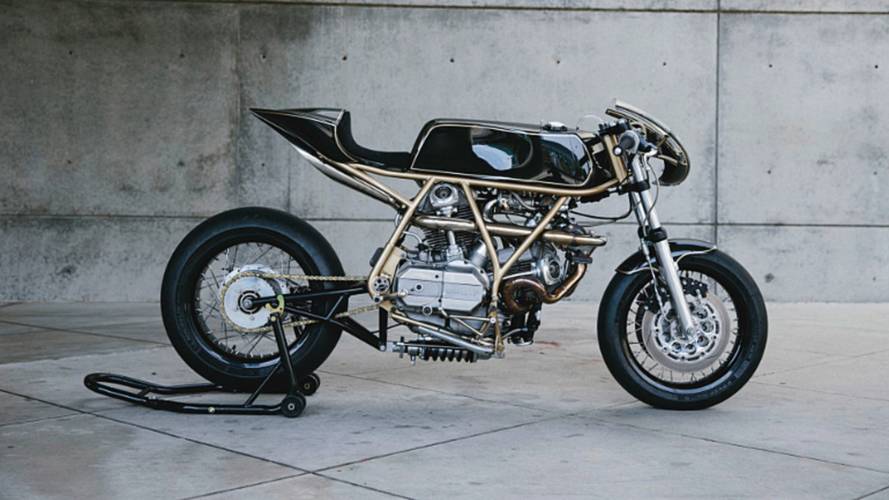 In an oversaturated world of cafe racers, Max Hazan creates a one-off blown Ducati build that stands out for all the right reasons.

A blown Ducati that seamlessly blends classic and modern styling

Max Hazan is your favorite builder’s favorite builder. I recently had conversations with two prominent builders – one in Madrid and one in San Francisco – and both reverently mentioned the name “Maxwell Hazan”. Hazan builds unique bikes that blur the line between motorcycle and art while still boasting impressive performance. This week’s Bike of the Week is a more modern bike than we typically see from Hazan Motor Works, but you’d never know it from looking at it. Behold this gorgeous, custom, hand-built, turbo-charged, 1978 Ducati 860GT cafe racer.

Hazan began his building career by playing around with motorized bicycles, and has since slowly worked his way up to building large-displacement forced-induction V-twin customs. In addition to being good at working with his hands, He has a profound sense of creativity and ambition that can no doubt be seen in his work.

“Motorcycles are an artistic medium. Each part is the same as a brushstroke. I start with a motor or idea and let the lines dictate what to build around it,” explained Hazan. “The piece should reflect your willingness to build whatever you can imagine."

Hazan Motor Works’ Ducati 860GT is one of the tamer (relatively speaking) builds that have rolled out of the small Los Angeles custom shop. The project came together slowly after a client gave Hazan the donor Ducati to play around with. Not long after, Hazan got a call from the client suggesting they wanted to go the forced-induction route and Hazan enthusiastically agreed. The difficulty of the installation of a super or turbo-charger greatly varies depending on what engine it’s being married to, and a kick-start only Ducati 860GT is not on the easy-end of that spectrum.

“That meant a blow-through setup for the turbo was the best way to do it. I knew I’d have my work cut out for me to make a reliable and streetable bike,” Hazan explained.

A Garrett GT15 turbo-charger was selected and paired with the air-cooled, 863.9cc, SOHC, four-stroke, 90-degree, V-twin. From there Hazan got to work building a bespoke chassis out of chromoly steel tubing.

“We shortened the wheelbase about two-inches by steepening the front end and changing the trail to elevate the heavy controls of the 860, and we went to a single Works Performance shock under the whole thing. From there, I did my usual foam shaping and after about five attempts got something that worked with the shape of the bike. For the plumbing it had to be function first, form second, so there was a lot of work that went into making the maze of tubing and lines easy on the eyes.".

Once the frame was completed, custom triple clamps were fixed up front while a matching custom chromoly swingarm was fitted in back and stuffed with a 5.5-inch Excel rim wrapped in Michelin rubber. A nifty under-slung Works Performance shock dampens the swing-arm and allows the space behind the engine to remain uncluttered. Wilwood calipers were mated to GSXR disks to offer plenty of bite, and high-end Magura controls were thrown into the mix along with a hydraulic clutch conversion. A single analog Harrison "clock tach" adorned in custom HZM paint is tucked beneath the mini fairing/bikini windscreen while a pair of small round analog boost and fuel gauges are mounted in the tank.

READ MORE: The Thiverval is One Seriously Epic XDiavel Concept

After an involved period of experimentation, Hazan signed-off on the use of a Weber DCOE 40 carb,  an electric oil system, Holley regulator and fuel pumps, Electronik Sachse ignition, stainless intake valves, and one of the coolest under-tail exhausts ever created. The hand-made stainless steel single pipe snakes between the engine and chassis before bending up to run along the bottom of the tail section. It tapers off diagonally and matches the profile of the bike’s tail.

“My favorite thing about the Ducati is the blow-off valve. It may be a little ‘Fast and Furious’ but it’s f****** cool to change gears on a motorcycle, hearing the spool of the turbo and the feeling of the boost. I think that noise was part of the reason I made the bike,” said Hazan.

The bodywork on this build was all done by hand, and combines elements of race-bred machinery from both today and yesteryear. The tank has a very vintage look to it while the tail is pure contemporary sportbike, and the front fairing is a blend of the two. Adorning said bodywork is a gloss black paint job with gold pin striping that plays well off the matte gold powder coating of the frame.

Hazan Motor Works is a one-man operation, and Hazan performs pretty much all of the work himself. From designing to welding, the jack of all trades knows how to build a world-class one-off motorcycle. Hazan is no less meticulous when it comes to the mechanics of his machines, and dedicates an incredible amount of time to getting everything dialed in perfectly.

The fruits of Hazan’s labor are pretty clear, and the talented builder says he has no plans to slow down anytime soon. Regardless of what kind of bike you like, Max Hazan has almost certainly built a custom machine that you’ll dig. I highly recommend checking out the custom bikes on his site.

Do you know of a bike that you think deserves to be RideApart’s next Bike of the Week? Drop us a line at info@rideapart.com