Biker Book Review: All the Gear, No Idea 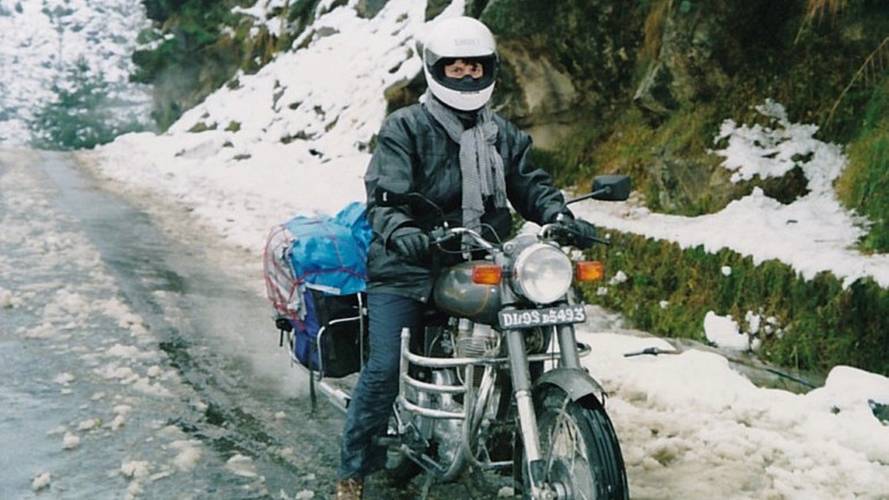 One Woman's Solo Journey Through India

Book Review: All the Gear, No Idea: One Woman's Solo Journey Through India

A not-yet-middle-aged British bank employee decides to leave it all and travel around India on a Royal-Enfield, alone. This isn't Eat, Pray, Love, it is more like Ride, Fix, Love.

Michele Harrison is an occasional reader of RideApart, and sent us an electronic copy of her book to review, and I am really glad she did. It is quite an enjoyable travel diary of her epic time in and around India in the mid-1990s.

If you have a problem reading about new riders making the kind of mistakes that could get them killed, you are not going to like some of this book. But, if you can roll with it and remember a time before you learned to ride, and before you lost your sense of childlike wonder, you'll have a nice tale of exotic travel.

Like so many of us modern folks, the monotony of the daily commute, and the eight hours a day behind the desk were crushing Michele's spirit. Here's the thumbnail sketch: In 1997, in her 30s, Michele was bored with her job, her boyfriend and her life. For some people this means grad school, a dramatic change in hair color/style, or an illicit affair, but for her it led to India, and a Royal-Enfield Bullet.

Before leaving England, though, there is the small matter of not having a motorcycle license – or even knowing how to ride – to take care of. And, or course, once in India there are all sorts of the big and little issues that make this kind of travel such an adventure.

Michele's story is the kind of travel adventure that reality TV and ADV forum riders can only dream about. I am not going to recount them, (I'll let her do that in the book), but they involve all sorts or breakdowns, closed roads, open roads that hardly pass as such, language barriers, border clashes, and a whole primer on the history of British/Indian relations.

Unlike Ewan McGregor, she didn't have millions of dollars, a chase truck, and a crew just off screen. Or even the latest modern bike. And unlike your ADV buddies online, she didn't have the benefits of GPS, sat phones, cell phones, or the like – just the occasional internet cafe with dial-up. Also, unfortunately, this all happened in the age before digital cameras, but luckily she kept a detailed diary and is quite an expressive writer, especially for a former banker.

If you love motorcycles you will wince in sympathy as she torture tests that poor bike through the first few months of inexperience. Then thrill along with her as she rides through rugged terrain, beating on the Bullet some more for the rest of the year.

My brother-in-law owns a Royal-Enfield, and the few times I have ridden it in Los Angeles I have been left wanting to beat on it, too, because of its mule like nature. In India the Royal-Enfield's agricultural design and 1950s simplicity makes it much more fixable with the level of technology you find on the sub-continent. Breakdown in India on a modern BMW and, well, good luck finding parts – or making them!

Reading it, and looking at the pictures, I was immediately taken back to my own tour of the United States at about the same time, on a 20+-year-old Honda CB750 . Unfortunately for me, I did not keep a diary, but perhaps I will dig out and scan the pictures and write it up for RideApart.

Things really were different in the days before Google maps, internet everywhere and camera phones. You can barely get lost in most of the 1st world as long as you have your phone on you (unless you are in a horror movie), and even Africa, South America, and India have cell service in a lot of places

I still have my CB750, but Michele decided to sell off her Bullet in India when the time came to head back to London. These days she splits her time between the French Alps and London, and rides a Yamaha Diversion 600 (Seca II to us here in America) or Fazer 600 (FZ-6 to us Yanks). She has since been all over Nepal, Vietnam and Goa on rented bikes with her husband, whom she met in India.

. If you are a regular reader of Amazon eBooks and on the Kindle Unlimited program, you can read it for free.

If you have any motorcycle-related book, movie or music suggestions, I'd love to hear it. Either post in the comments section, or email us.