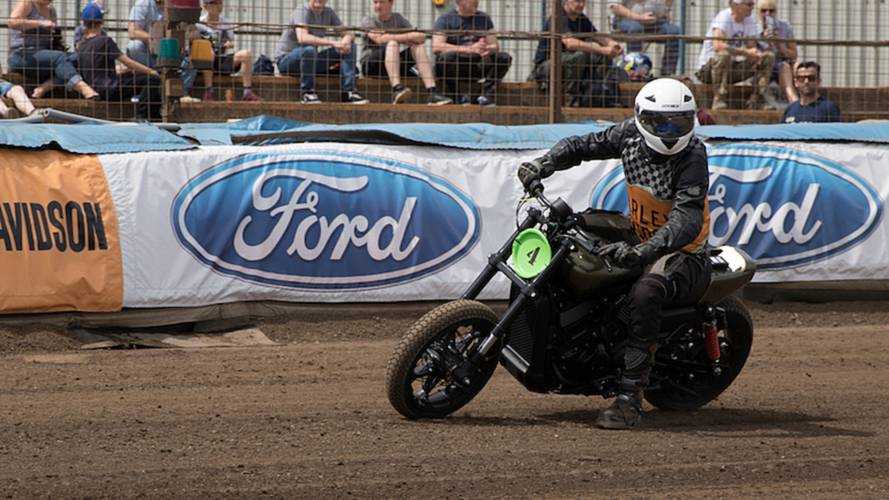 Chris Cope set two simple goals for himself coming into Dirt Quake, the annual flat-track festival of motorcycle goofiness. Did he achieve them?

It is very important that I be part of the parade. I am doing my best to be nonchalant about this, but, damn it, if there’s a parade happening I need to be part of it.

The parade in question is a single lap around Adrian Flux Arena taken by all the participants of Dirt Quake, to kick off two days of dusty, hot moto buffoonery. Harley-Davidson has gone to the trouble to teach me how to race flat track so I can take part astride an oh-so-slightly modified Street Rod. The only problem is that Harley hasn’t quite brought enough bikes. That won’t be a problem for the actual races – there are two waves of riders competing in the Harley-Davidson class, so we’ll be able to switch out – but two people are going to have to miss out on the parade.

“You planning on riding the parade?” I ask Danish journalist Carsten Freimann Olesen, with whom I’ll be sharing a bike today.

“Parade?” he muses, drawing on his miniature cigar. “I don’t know. We’ll see.”

We’ll see?! How can a person be so relaxed about being in a parade? I ask a few of the Dutch journalists; they, too, are insouciant. Europeans don’t get parades. In the end, former UK and European flat track champion Peter Boast – who had given me flat track lessons a few weeks previous – has to do a TV interview and I am able to ride out on his bike.

There are probably more than a hundred bikes in the parade. We of Street Rod clan are the least interesting. The whole point of Dirt Quake – held each year in King’s Lynn, England – is to celebrate the odd/hooligan side of motorcycling. Leave your seriousness at the gate, please. This is an event for people who embrace the British “have a go” attitude. It’s an attitude quite similar to the American South “watch me do this” attitude, but usually involves more silly outfits.

All around me are people in hilarious costumes. One woman is dressed as a cowboy and has disguised her trials bike as a horse. There’s a man dressed as a WWI flying ace. Someone dressed as a lobster. The bikes, too, are ridiculous: cruisers, choppers, sportbikes, dirt bikes, classic machines, scooters… I’m particularly tickled by a man in a three-piece business suit riding a brand-new Honda X-ADV scooter. He has not even bothered to replace the stock tires.

We both laugh uproariously at what a bad idea it is.

The parade, as I say, is a single lap around the arena. I wave at the grandstands while myself and Dutch mo-jo Jelle Verstaen rev the ever living hell out of our bikes. In addition to dirt-worthy tires, better suspension, and dented fuel tanks (to allow for increased steering angles), Harley have modified our Street Rods by taking off the exhausts. In this state, OK, yeah, fuelling is a little wonky, but oh my goodness do they sound awesome. It’s hammer of the gods stuff.

At the end of the lap, all the riders are stopped outside the paddock and an organizer waves his arms to encourage us to rev to our hearts’ content. It is an overwhelming, terrible, wonderful racket. I feel like I’m 5 years old, having one of those hyperactive fits in which I’m so excited, so deliriously happy, that I feel I might split open. I can’t hear myself, but the shaking in my lungs tells me I am laughing uncontrollably.

Genuinely, this will be the highlight of my day: a two-minute parade and revving a motorcycle engine like a loony. Clearly I lack some of the mentality for racing.

That’s not to say I don’t enjoy the racing. It’s just that I'm not any good at it. Nor am I under any illusion that things will magically work out to the contrary. I've come to Dirt Quake with two clear goals: don’t crash and don’t come last. That’s not really the sort of competitive ambition one is supposed to have in racing.

I’m reminded of my post-college rugby playing days, when my team captain once pulled me aside and suggested I be more aggressive in my tackles.

“Hey man, we all gotta go to work on Monday,” I told him. “I don’t want to injure anyone.”

“Uh, no one but you is thinking that,” he said.

Still, by my aforementioned metric the day will turn out to be a success. In my first heat, I have a sketchy moment coming around the second corner but manage to hang on as the bike squirrels itself steady. With such an underdeveloped racing brain I focus mostly on the act of just riding the bike, rather than worrying about whether I’m riding faster than anyone else.

Toward the end of my third lap (except in official DTRA races, most of the races at Dirt Quake are four-lappers), Boastie comes tearing by and receives the checkered flag. When this happens I suddenly realize that I do not know the rules in this situation. Do I keep going – finish my fourth lap – or just come in? I decide to carry on. When I pass the turn-in point, though, I glance back and see that Jelle, who had been behind me, has decided that the correct etiquette is to just call it quits. He, and everyone else, has followed Boastie to the middle of the track, to wait to be given the all-clear to return to the paddock area. To wait for me.

“This would be a really bad time to crash,” a voice in my head says. “Out on the track by yourself, while everyone sits and waits for you.”

So, of course, I slow down. I positively crawl across the back straight, around turn three and four, and cautiously inch to the finish line. There, the flag girl is waving two flags and giving me the evil eye.

“These are checkered flags, you idiot,” she seems to be saying with her look. “Get your slow ass the hell off the track before we have the water truck come run you over.”

In the second heat I get a better start and am a little more alert to the folks around me. I am nowhere near being in contention, but back in the rear of the pack it is a real battle between myself, Finnish mo-jo Vesa “Faddy” Koivunen and Dutch mo-jo “Slick” Rik Romkes to see who will be the best of the worst. I fight valiantly and almost – almost – manage to get ahead of Vesa, but in the fourth lap I spot a particularly attractive lady in the grandstand and temporarily ease off the throttle. As stated above, I lack the right mindset for racing. I finish the race with Rik just on my back wheel.

Hilariously, like the Bluesmobile collapsing at the end of The Blues Brothers, the zipper on my Hein Gericke Panther 2 jacket breaks when I return to the paddock, tearing open and rendering the jacket useless. A day later, when I head toward home, it will be left in a hotel trash can.

You won't be surprised to learn I that I do not progress to the finals. Harley has stacked the deck with former and current pros to ensure it will win its race class, but even if it hadn’t I still wouldn’t have had much of a chance. The only reason I’ve managed to best anyone today is that the Dutch guys received no training; this is their first ever flat track attempt.

But we take our victories where we find them. I didn’t crash; I didn’t come last.

No doubt former World Superbike champ Carl Fogarty now wishes he had set his goals as low as my own. The next day he will compete in the Best of British class astride a rip-snorting, hardly modified Street Triple and come down in the final, breaking several ribs (reports vary between two and 10) and his shoulder blade, as well as puncturing a lung. Like the true champ that he is, he will wave at the crowd before being sped away in an ambulance and later airlifted to a larger hospital.

Even he, though, would probably still tell you that Dirt Quake was a good time. What started out as some folks in eastern England being silly has expanded to become a two-day televised event with big-name sponsors like Harley-Davidson. In addition to Harley, Indian and Triumph also put forward bikes at the event (they, too, stacked the deck and won their respective race classes). But the event maintains its goofball feel. It’s just a load of people having a really good time. Long may it continue.

I’m looking forward to going again next year, regardless of whether I take to the track.