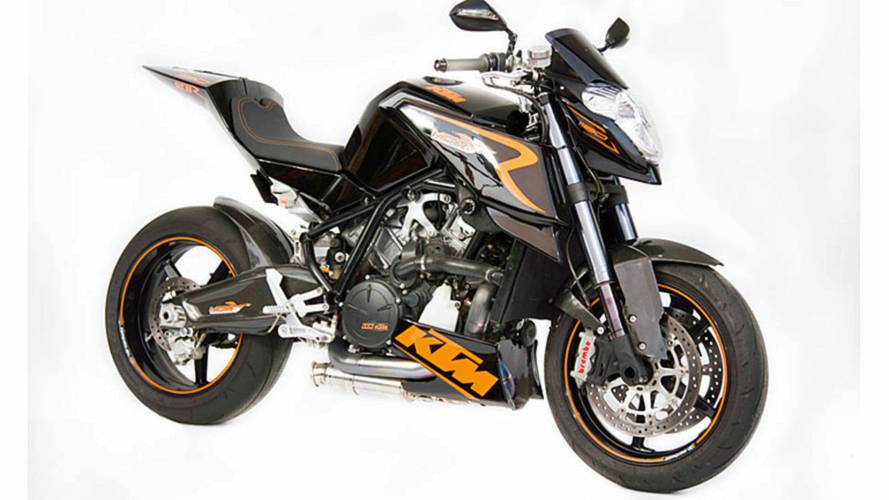 In this edition of Bike-curiosities we've locted an Aermacchi Sprint, Yamaha SRV250 and a pair of trick KTMs. The first is a naked RC8R and a sweet 450 EXC.

At Bike-urious, we’re spending all of our time finding the most interesting motorcycles that are currently for sale for you to drool over (and maybe empty your wallet for). Here's our favorite finds from this week! Starting with that fine example of an RC8R from the team at MCRR, pictured above.

Built by Dave Schmidt of Schmidt Performance, this impressive KTM was just featured in Dirt Bikes magazine. As a stock bike it had plenty of power, but now with suspension and motor modifications Dirt Bikes says it can outrun most new OEM dual sporters.

Dave got the bike three years ago and rode it for a year. When the counter shaft bearing went, he decided to go a little crazy with it. As the engine was apart, he put in a Vertex Pistons Replica kit and then added a FMF PowerCore 4 slip-on exhaust. The chassis was sandblasted and then powdercoated orange. Other goodies include a Renthal bar, IMS 2.9 gallon fuel tank, Trail Tech X2 headlight, IMS Core Enduro footpegs, and new plastics. Seeing as Schmidt runs a professional suspension shop, he rebuilt the suspension himself. For more on the build, check out this video from Rocky Mountain ATV/MC:

Find this well-prepped KTM for sale for $6,000 in Perris, California here on Find It Sports.

Never officially sold in the US, the SRV250 was Yamaha's baby cafe racer a la the Honda GB500. The seller is not aware of another example in the US, and neither am I. I hope the next owner keeps it as-is and avoids the temptation of turning it into a cafe. It's just too unique in the States.

The SRV (besides being a "Soulful V-Twin" as shown in the picture above) features the 250cc engine from the Virago cruiser. Yamaha gave the motor dual carbs and a different cam which bumped power from 21 to 27 horsepower, and gave it some pretty nifty styling.

This example is said to be nearly stock, though it features a Supertrapp slipon exhaust, aftermarket bar/grips, and braided steel brake lines. The seller says the bike was legally imported from japan and it has a current Arizona title in good standing, registered into 2017. The bike was recently given a full service which included a carb rebuild and new spark plugs/fuel lines/oil and front brake fluid. The bike "runs perfect" but you'll want to replace the tires, chain/sprockets, and grips in the not-too-distant future. Find this rare little Yammie for sale in San Jacinto, California with a BIN of $3,750 or best offer here on eBay.

The AJS Stormer was a bit of a flop, as it was a last ditch effort by Norton-Villiers to dump excess inventory of Starmaker engines. However, it was the first MX bike to feature shocks that had been moved up as well as leading axle forks, so the chassis was at least worthy of the venerable AJS name. Head on over to Motocross Action Magazine to learn more if you so desire.

This specific example (VIN: Y1298) has quite a story. After the distributor put on break-in miles, it was given to Cycle World for testing. For unknown reasons, the bike stayed with the magazine after AJS went out of business, so the bike went to Cycle World's off-road editor. It has since moved around, but it really only has testing miles on it. It's absolutely beautiful and it has the original Dunlop Sports tires, which according to MAM are worth about a grand in like-new condition just by themselves. Find this AJS Stormer for sale with bidding up to $3,700 in Goleta, California here on eBay.

This 1967 Sprint (Aermacchi) is aimed toward a World Land Speed Record in the 250CC M PG class. Modified frame, Pushrod Gasoline. The listing for the bike is very short on details such as how the bike ran in relation to the LSR. It does say that the bike has exceeded the current standard but I know for a fact that there is a monstrous difference between pavement and the salt.

If you think the affliction might be upon you, this might be a serious chance to get into the game at a relatively low money entry point. Burt Munro may have gotten it done, once, but the reality is it takes serious money to be the fastest. I would ask the seller a ton of questions before I bid at all. One would be ‘how far off is the motor from making vintage class’?

Or, you could buy the bike, park it in your shop and tell whatever story around it you wish. This 1967 Harley Davidson Sprint is in Winnipeg, Manitoba, Canada and is listed as ‘mechanically excellent’ and lists several performance mods including swingarm extension. The bike is currently priced at $2,650 with reserve not met here on eBay.

Starting with KTM's RC8 superbike, Australia tuner MC RoadRunner (MCRR) has created a hell of a naked speedster after over 200 hours of work. Is it easier to wheelie? Absolutely. Would you rather have this than a stock RC8R? You tell me.

A quick tangent about MCRR - their most recent build is a Norton Featherbed frame that's had a Honda CBX engine shoved into it. Check it out here. But let's get back to this bike. Mechanically, this bike is just about stock. The bodywork was the challenge, and the builder thought previous naked RC8R builds failed because other customizers just stripped the bike down without trying to match "the existing sharp KTM angles." This bike got a titanium Akrapovic exhaust with dual mufflers, WP 48mm forks from a 990 Super Duke R, and Brembo brake master cylinder. I struggled to guess where the headlight was from - turns out it's a Hyosung unit. For more information on the build, check out this review from the appropriately-named Australian magazine "Bike Review".

Find this custom KTM for sale in Coffs Harbour, Australia for $17,245 here at Raider Moto.