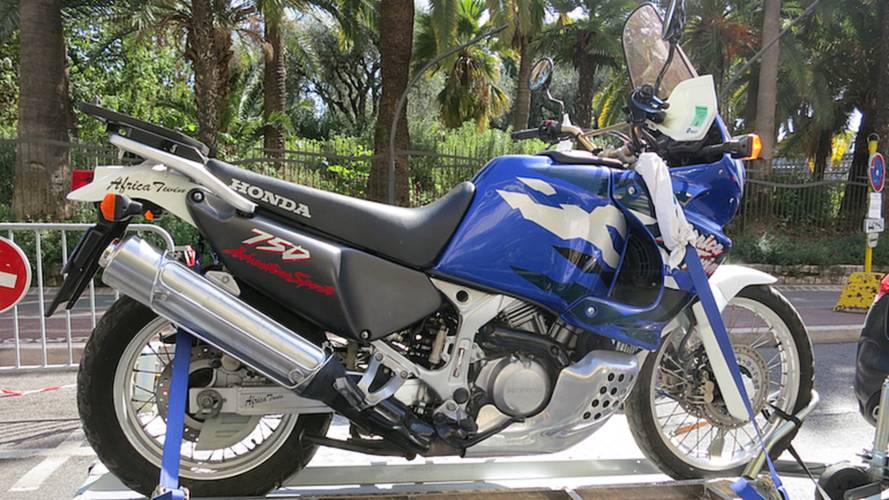 Honda isn't saying, but it appears that a middleweight Africa Twin will join the roster in the near future.

Given the popularity of Honda’s Africa Twin, we have to wonder if a smaller, lighter Adventure Sports model might be in the works. The answer, according to England’s Motorcycle News, is no. At least for now.

“When we speak about pure adventure, we don’t have such a wide line up,” said Kenji Morita, Africa Twin project leader. “And yes, we are thinking of putting a half-way model in to attract younger people. We will develop this bike, but it’s not something we are working on right now.”

So speculation now shifts from if to when, and thence to what engine is likely to power the subsequent sibling. By “half-way model” could Morita be suggesting a 500cc parallel twin? Maybe using the existing mill from the Rebel 500?

Or maybe Honda will opt for a 650 engine like the original Africa Twin. Rather than downsize the current engine, Honda could simply use the venerable XL650 single similar to the NX650 Dominator of 30 years ago.

Or, better yet, a 750cc V-twin adventurer like the second generation Africa Twin. That would put Honda right in the mix with Triumph’s Tiger 800, the KTM 790 Adventure, and the forthcoming Yamaha Tenere 700. While Honda may currently be keeping their cards covered, as they usually do, there can be little doubt that a middleweight model will break cover sometime next year. If said middleweight model does drop, it will likely be as a 2019 model.

So, to continue this line of speculation, will the appearance of a smaller Africa Twin herald the arrival of a larger one as well? Will Honda bump the current engine to 1200cc to match KTM and BMW's jumbo trailies?

“In terms of pure horsepower, then yes some of our competitors have more, but for us this is not what we have in mind,” Morita said. “Our intention is to have the right amount of horsepower that customers actually use when in real riding situations. If we just want to increase horsepower it’s easy but when you do that, you lose something – the bike gets heavier, it vibrates more, it’s hotter and you lose the balance we are looking for. We experimented with power delivery at different rpm ranges and the best happened to be 100 horsepower.”

Morita added that Honda is also evaluating the current developments in electronics – Bluetooth and USB connections – for probable inclusion on the next generation of Africa Twins. We hope that will include a 750.