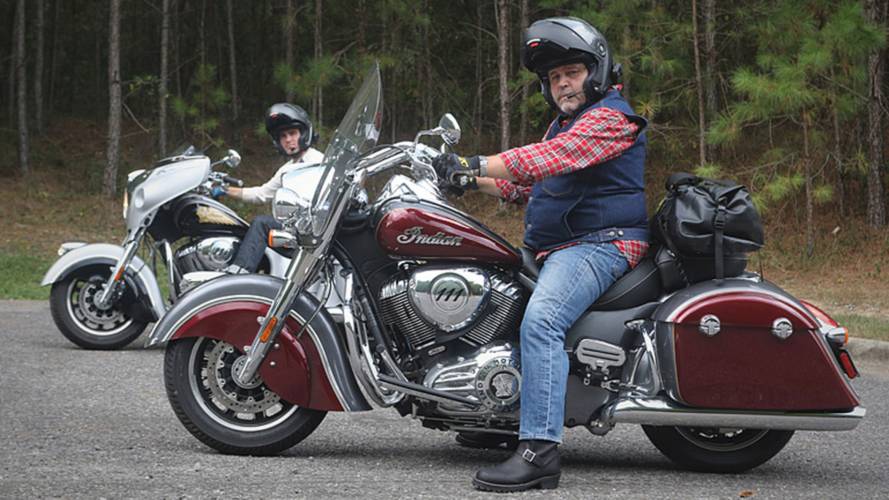 Kyra tells us about the time Justin and his dad took an East Coast road trip on a couple of brand new Indians.

It was a rough ride along Interstate 78. There were the usual obstacles – old folks slowly drifting over rumble strips, big, V8-powered trucks switching lanes with only a gasp between their tailgate and Justin’s handlebars, a distinct lack of turn signals, and a million distracted drivers in two-ton death machines. After every incident, The Captain would growl into his headset, forgetting he had an audience on the other end of his microphone. Every growl promised an ass beating to the next ballsy bastard who dared cut off his son.

The roads felt unusually dangerous out here. Not unfamiliar, there are bad conditions and inconsiderate motorists everywhere, just a bit more detached. It was as if every vessel voyaged across a vast open sea, and anyone who came into site was invading their privately-owned passageway. This made The Captain all the more uneasy, if not furious. Over 1,800 miles were behind them, and he wouldn’t tolerate a crash when they were so near to the finish.

Planning the trip went almost as "smoothly" as taking it. Justin thought a tour up the East Coast with his dad visiting monuments, music scenes, and historical sites aboard Indian Motorcycles would be quite a treat, and the old man agreed. See, David Coffey, aka The Captain, is a history buff. Unfortunately, he's also a certified procrastinator and getting him to firm up a date was like pulling teeth. It was so bad that, a week out from the start of the trip, The Captain still hadn’t booked his flight to the starting point at Daytona Beach. Stress and a ticking clock aren’t unfamiliar elements to trips that Justin and The Captain have shared, but every experience to date, despite the spats and the moaning and delays, has been memorable. Some have even been spectacular, and this trip promised to be no exception.

Finally, the duo reached Daytona Beach and headed to the Indian Motorcycle dealership where a 2017 Springfield and Chieftain awaited. With bikes acquired, the Coffeys saddled up and headed due north. The Springfield was, to-date, the biggest and bulkiest bike The Captain had ever ridden. Since anything worth doing is worth doing the hard way, his first trip aboard this massive machine was an ambitious six-hour, 256-mile cruise from Daytona Beach to Savannah, GA. Since there was no time to prep thanks to The Captain's procrastination, they figured that it was best to stick to the side roads to become properly acquainted with their new machines. The first leg was slow, but they liked it that way.

Atlanta, GA, was the first major stop on the way to Savannah. Their friend Steve West – a metalsmith and jeweler – awaited the two riders in his tiny shop. Justin had commissioned a gift for the Captain and it was today that he’d receive it – a finely crafted hobo nickel cigar ring. This encounter led to long conversations about old bikes, future endeavors, and the journey that lay ahead. Where to next? The Barber Motorsports Museum. That place is fantastic! Where do you end the trip? New Jersey. What else do you plan to see along the way? Whatever there’s time for… Nashville, the Blue Ridge Parkway, Monticello, D.C., Gettysburg. If there’s time.

The next morning, Justin and The Captain bid farewell to Atlanta and rolled out for Birmingham. The Barber Motorsports Museum was everything you would want – a richly diverse collection of transportation and engine-powered sport spanning history and continents compiled artistically for the viewer’s pleasure. The Coffey men paid particular attention to the exhibits featuring Indian Motorcycles, comparing the old school Springfield machines to the high-tech beauties out of Minnesota.

The themes of past and present, heritage and future were at the forefront of this father and son expedition. They talked about how Indian Motorcycle’s heritage had persevered throughout the century, creating opportunities for exploration and experiences to sons and fathers for over one-hundred years. Even now, it married classic and contemporary to bring another duo together to push their boundaries, see the world, and feel the fruits of freedom one tank of fuel at a time. The big Indians took them on a fortuitous journey through America’s most notable past: Dr. Martin Luther King’s grave in Atlanta, the Smoky Mountains, into the home and mind of Thomas Jefferson, the heart of D.C., and even to the site of the Civil War’s most infamous battle.

While It could be said that the bikes were spectacular, rode smoothly, acted reliably, induced the right amount of pleasure and called attention with their mod-Art Deco looks the whole of the trip, that’s not what matters in this story about bonding and travel. What matters is that tire tracks were left across 2,000 miles of the East Coast and memories were etched into far-reaching depths of the mind. A father at 64, inspired by his son’s ambitions and curiosities, who only recently began riding motorcycles again after 40-plus years. A son, seizing an opportunity that could be lost sooner than anyone expects to venture side-by-side with his lifelong mentor into mysterious parts of the world.

READ MORE: Let’s All Tell Indian Motorcycle What to Do

They could’ve just watched a hockey game or driven to the coast or hell, even gone hunting – whatever it is a fathers and sons do together – but they didn't. Instead they tested their limits, learned something new, ate something odd, and struck up conversations with strangers up and down the Eastern Seaboard.

Now they were done, heading along Interstate-78 to drop off the motorcycles at a dealer in Lebanon, NJ. The Captain’s blood was boiling now thanks to the Jersey drivers, but thankfully they only had a few miles to go before the exit. He cursed the East Coast freeways one last time before Justin reminded him that he could always be safe and comfortable back home in his office chair rather than in the saddle of a beautiful, powerful new Indian. Silence over the headset spoke loudly to Justin. He grinned, satisfied.