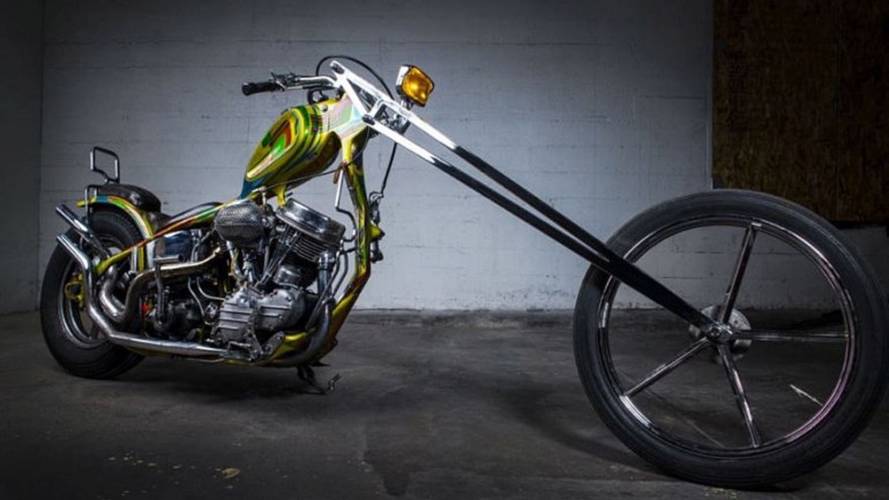 Top 5 Bike-uriosities – Week of 8/8At Bike-urious, we’re spending all of our time finding the most interesting motorcycles that are currently for...

The Bonneville has been around since 1959, and since that time there have been a few limited edition runs like the Silver Jubilee I've previously featured. In 2009, Triumph released 650 examples of a 50th Anniversary bike, and this one stands out as it's still in (or really on) the crate it was shipped in.

Can you guess why 650 examples were built? I'll give you a minute. The original Bonnie displaced 650cc, hence the production number - a brass plaque on the handlebar clamp reminds you of that. My favorite aspect has to be the paint scheme, which is obviously inspired by the "Tangerine Dream" colorway of the original bike. This limited edition also gets special decals and a chrome cam cover but the only changes here are cosmetic.

This bike is number 182 of the 650 and it has just 0.6 miles on the odometer. The seller says they were unable to find any damage or issues with it, so find this 50th Anniversary Bonnie for sale in Tucson, Arizona with bidding up to $6,800 here on eBay.

The seller calls this "part survivor/part custom" - whatever you call it, it won Best Chopper at last year's Born Free 7. It's been featured in Easyriders Magazine (NSFW) and will be featured in the August issue of Hot Bike/Street Chopper.

There isn't much known about the history of this bike (VIN: 63FL3554) but the '63 FL engine has been built and runs great:

After the build was complete, the bike completed a 4,500-mile trip from Seattle to Los Angeles and then back into Canada. Because of that, the bike now shows plenty of signs of use (paint cracks, chips, and some repairs) but maybe you're someone who likes 'patina.'

Find this chopper for sale in Seattle, Washington with bidding up to $11,600 here on eBay.

The SS80 was named because Brough Superior guaranteed that each model would be able to top 80 miles per hour. Motor Cycle magazine had a different name for it - they called it the "Rolls-Royce of Motor Cycles." Some people just consider it to be the predecessor to the SS100 - but no matter what you call it, it's an important part of motorcycling history.

I say that the bikes were guaranteed to hit 80 - George Brough himself rode each example to verify, and each bike had to put down at least 30 horsepower on the dyno. For more on the SS80 (and the tale of someone who got to enjoy riding one), check out this profile from Real Classic.

This bike (VIN: 181) is claimed to be a 'superb example' that's on the Brough registry with the original UK registration. Impressively, it has a fully known history going back to the first owner - a Mr. Stinnes who bought the bike from Heinrichs and Eichorn, a dealership in Cologne, Germany. Just a year later, he returned the bike so that he could pick up a SS100. The bike went through several owners over the next few decades until it came to the current owner in 2014. Find this SS80 for sale in Stowmarket, Suffolk, England with bidding up to $28,100 and the reserve not yet met here on eBay.

In the early 70s, young riders were throwing all their money at 100cc MX bikes from Hodaka and Kawasaki. At the time, Harley's cheapest bike was the Sportster, so they thought they should get a slice of the small MX market by having Aermacchi build them an entry level motocrosser. Aermacchi took a 125cc Rapido and sleeved it down to 98cc to create the short-lived (and fairly terrible) Baja 100. These are hard to find in good shape, but this example stands out even more as it has never been ridden.

The thing was, Harley tricked a lot of riders because they were able to create a successful racing program with the Baja - they even won their class in the Baja 1000 in 1971. What consumers soon found out is that the production bike could not compare to the race bike, or even what Kawi and Hodaka were putting out at the time. Still, it was Harley's first foray in the dirt and and it's now an interesting footnote in HD's history. For more on the Baja, check out this "Classic Steel" article on PulpMX.

By the end of the production run, Harley had a little bit of trouble selling Bajas, which might be why this bike sat in a showroom for years until the seller acquired it. He/she says the bike is in fantastic condition, so find this HD Baja for sale in Upland, California, with bidding up to $8,099 here on eBay.

Someone in Camarillo, California, is selling off 15 fantastic Italian sportbikes. All of them have individual asking prices ranging from high to comical, but "a significant price break will be given if all of them are purchased as a package."

Though the seller says he's got 15 bikes, only 10 are currently on Craigslist. Click here for a list of all them, which include four Bimotas, two Ducatis, a Laverda, a Moto Guzzi, a Magni, and a Ghezzi Brian. Here are my three favorites:

One of 50 ever built, the Magni Australia 98 was powered by a 992cc Moto Guzzi V-twin. This example has a clean California title and is said to be in mint condition.

According to the seller, this is one of 47 examples still in existence of the 100 produced for homologation purposes. The Racing bikes got 102 horsepower thanks to high compression pistons, bigger injectors, and Carillo rods. They also got WP suspension, twin Brembo 320mm discs, Marzocchi USD forks, and more.

Formed in 1995, Ghezzi-Brian immediately tasted success by winning the Italian SuperTwin championship in 1996 with their Super Twin prototype - it won nine of the 32 races. Four years later they built a run of replicas with the engine/drivetrain from the Moto Guzzi Sport 1100i. I think this is one of the Supertwin 1100s. The seller calls this a "Supersonic" custom but I'm not able to find any sort of information on that and my knowledge of the company founded by Giuseppe Ghezzi and Bruno Saturno is sparse at best. Have any of you heard of the "Supersonic"? Either way, it's a bike I want to ride, badly.

What piques your interest? What do you want in your garage?