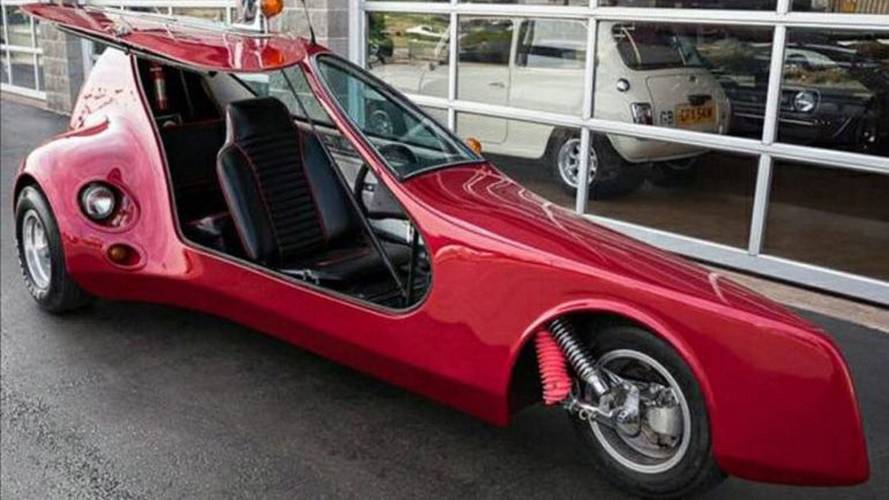 This week's Bike-urious round-up offers a Franken-bike, a crazy three-wheeler, and a bike built of Fiat parts.

Though they are no longer in business, Service Honda was well known not just for supplying OEM parts but also for the creation of an aluminum-framed open class monster called the 500AF. It all started in 1997, when, as a personal project, Service Honda stuffed a 500cc 2-stroke motor into a Honda CR250. The results were dramatic and Service Honda created an official model with the bike just a year later.

In 2006, Service Honda introduced the AF-X, which expanded beyond motocross and gave the bike lighting, a spark arrestor, side stand, and digital injection. Here's a one-owner example that's been plated in California.

It's one of Honda's best ever motors in a modern chassis, and the press at it up. MX Racer called it "the best open bike EVER" while Dirt Rider said that riding the 500AF was almost like cheating. For more on the Service Honda, check out this review from Dirt Rider.

This example has done 73 hours and 2,561 miles with just one owner. It's claimed to have been perfectly maintained and the California plate will add a lot of value for the right buyer. Choice extras include a BRP chain guide, Scotts Steering Damper, Flexx handlebars, Baja Designs dual sport kit, and M&M suspension. In addition to the standard Service Honda build, this bike was given a Pro Circuit Pipe/Silencer, ported/polished cylinder, Clark three-gallon fuel tank, and a Works Connection skid plate. Find this Service Honda for sale here on Craigslist in San Diego, California, for $9,500.

During the 1970s, America was suffering through an oil embargo. Lots of small companies tried to enter the automotive market by focusing on gas mileage. Bob Keyes of Ventura, California, looked at a study that found "93 percent of the vehicles on the freeways in Southern California were being driven with only a single occupant, the driver."

READ MORE: Is a Trike a Motorcycle? | RideApart

His thought was that having a 3,500-pound vehicle to carry around about 180 pounds of human being was highly inefficient, so he created the TriVette. Between 1974 and 1978, just 27 examples were built. Two used turbocharged VW motors, while the other 25 were powered by 58-horsepower 850cc Fiat motors. Here's one of the more common Fiat-powered examples.

The TriVette was advertised of being capable of 61 miles per gallon thanks to a light curb weight and good aerodynamics. For more on the TriVette, check out this article on Vigillante, which was run by Bob Keyes before he passed away in 2006. This example (VIN: TCC751012) has 11,355 miles and it's said to run perfectly. It's had a lot of work done including an engine rebuild with new piston rings, rod bearings, water pump, muffler, gaskets, thermostat housing, valve job, refurbed rocker arm shaft and rocker arms, and plenty more.

Find this Trivette for sale here on Craigslist for $21,000 in Windsor Hills, California.

The Kawasaki H2, for all it’s ‘widowmaker’ reputation was actually an upgraded and refined bike compared to the H1 that appeared in 1969. The Kawasaki design team really did a lot to fix the obvious flaws from the H1. Head shake was much improved (the H2 came with a stock steering damper), power delivery wasn’t as peaky, and the brakes were much improved.

Three things conspired to kill the Kawasaki triples beginning in 1973. The EPA was starting to make big noise about two stroke motors, the gas crisis hit (the H2 was a high-20s mpg machine) and Kawasaki introduced the four-stroke Z1, which took the "fastest production bike" label from the H2.

The 1973 Kawasaki H2 used a 748cc air-cooled two stroke inline three-cylinder motor that made 74 hp with a five speed transmission for a top speed of 120 mph. A wet weight of 463 lbs, front disc and rear drum brakes, steel tube cradle frame and good suspension made a very, very fast motorcycle.

This particular 1973 Kawasaki H2 (VIN# H2F24314) is in Chula Vista, California, and is listed as "carefully restored to as close to original as possible." The bike has the optional hydraulic steering stabilizer and a second disc front brake, which the listing says was a dealer installed option. The build list on this bike is impressive, and the color is one that can never be unseen. The bike is currently bid at $8,100 with reserve not met here on eBay.

Called "Frank" because it's a "Frankenstein" build, this Honda CB550 was custom built by GT-Moto. The seller picked it up last October but he/she doesn't have enough chances to ride, so the bike needs a "forever home." It features parts from other Hondas, Suzukis, Harleys, Ducatis - even a Benelli.

Highlights of the build include the cam from a Honda CB650 and a 605 big bore kit, Dyno Tech electronic ignition, front forks and calipers from a Suzuki GSX-R, Harley-Davidson wheel hub, and a Ohlins steering damper from a Ducati 996. The tank is a hybrid of a Benelli and Ducati units. This example (VIN: 2103771) also features GT-Moto's dual undertail rear suspension with Hagon shocks.

Find Frank for sale here on Craigslist outside of Dallas for $13,500. Note that this bike was recently on eBay, but 74 bids up to $7,000 were not enough to meet reserve.

Built between 1977 and 1982, the "Shifty" was a rather large motorcycle with the powertrain from a Fiat 127 - a 903cc engine and a four-speed transmission. Even the gauge cluster is lifted from the Fiat, and it's slapped onto the top of a cover on the engine where you might think the fuel tank is. The fuel tank is actually under the seat. Less than 70 Shifty 900s were ever built. (For good reason, by the looks of 'em – Ed.)

The Shifty was the brainchild of Hugh Grandis (or as the Italians called him, Ugo Grandis) in Padova, Italy. Hugo had experience at Chrysler in South Africa before he built this commercially unsuccessful two-wheeler. The Fiat drivetrain was coupled with lots of Laverda parts, Marzocchi forks, Brembo front brakes, and a Benelli seat. The motor put out 53 hp and 45 pound-feet of torque. As you'd expect, dry weight was significant at a shade under 600 pounds.

This example is said to be in excellent condition and it's ready to ride. The fuel tank was repainted in the original Ferrari 308 red, and mufflers were replaced three years ago. If you'd like to see the Shifty in motion, check out this video by Star Bikers (it's in Italian):

Find this Shifty for sale in Napoli, italy with bidding up to $3,674 and the reserve not yet met met here on Catawiki.

So, which would you put in your garage?