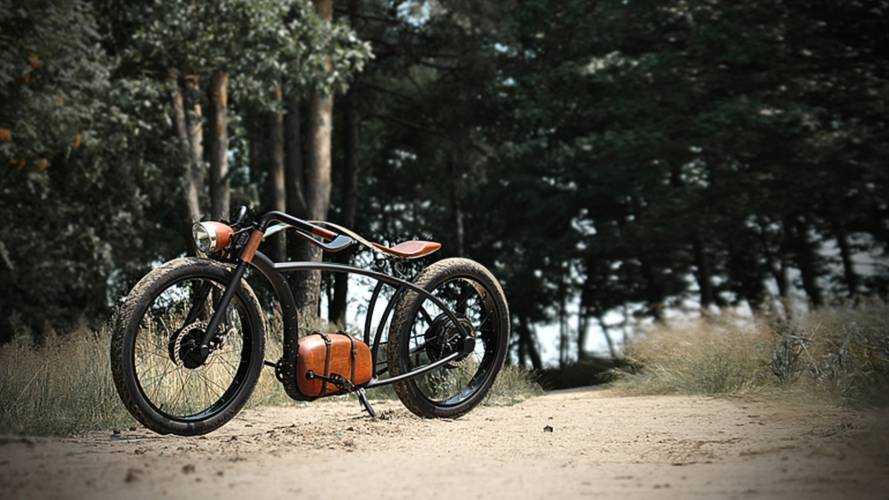 Two Poles who met on a beach came up with an amazing board track-esque electric bike that you may be able to buy soon.

Taking its design cues from the board track racers of yesteryear, the Avionics V1 is a breathtaking electric bike built by two guys from Poland. While it looks like a board tracker, the similarity ends at the engine cradle. Instead of a 1000cc V-twin sitting in that tube frame, a Jatoba wood chest sits there housing the battery, electronics, and charging port. Mounted in the rear hub, the motor is a brushless 5 Kilowatt unit that puts out 92 pound feet of torque and propels the bike to a top speed of 36 mph. This Means that it will keep pace with the average 50cc scooter. The 24-Amp hour lithium-ion battery offers three power selections - 250, 500, and 750 watts, and the range in Street mode (250 watts) is about 75 miles.  And if you run out of battery racing scooters and mopeds, the pedals will still get you home. Recharge time is a respectable 2-3 hours.

The Avionics story began two years ago when Jaromir Dziewic and Bartek Bialas met on a Baltic beach and got to musing about the relationship between flying and bicycling. As fans of aviation, speed, and vintage motorcycle design, they decided to build an earthbound flying machine. A minimalist bicycle in a classic form with contemporary electronics and brakes.

And, well, the results speak for themselves. A leaf spring supports the wooden seat, which incorporates the taillight, and a metal strap arcs from the seat to the steering head, evoking the shape of a fuel tank. Jatoba hardwood is also used for the headlight shell. Mechanical disc brakes are fitted at both wheels, activated by wood-accented old-school levers with outboard pivots. The 3-inch Duro tires ride on 26-inch rims.

The Avionics V1 qualifies as unique, since it is currently one of one. The company is now in crowdfunding mode, and no final price has been announced yet. The partners will launch a funding campaign on Indiegogo in September that will run for 40 days. If they get funded, they plan to build the bicycle in maximum runs of 80 copies, and they expect each production run to be ready for delivery in six to eight months. In the preliminary campaign, the V1 will be offered at a 40 percent discount.Forty percent of what remains unknown. But most folks will agree that the prototype is a stunning piece of work, and if you have to ask, well...