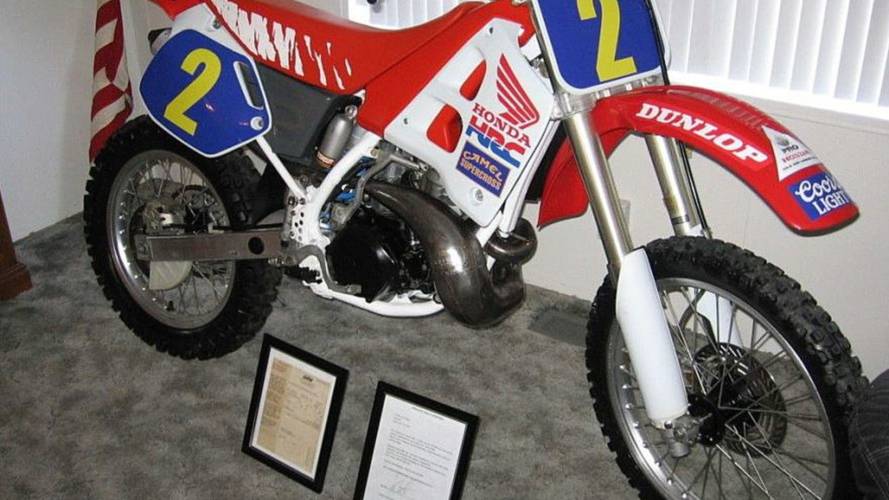 Bike-urious again scours the web to find the best motorcycles for sale this week.

If you were a fan of supercross in the '90s, then Jeremy McGrath was your king. His list of career highlights is staggering, but the highlight might just be his seven SX championships between 1993-2000. According to the seller, this was Jeremy's personal practice bike between 1990 and 1992, right before he went on to dominate the sport.

The seller says that he has full documentation for this bike (VIN: JH2ME0305MM301464), including a Letter of Authenticity signed by McGrath and DMV paperwork showing the bike in his name. It's not a factory race bike and Jeremy never raced it, but it was built and modified by Skip Norfolk, McGrath's famed mechanic and Pro Circuit racing. The number plates, shrouds, front fender, rear tire, and graphics have all been replaced but the originals are included and the rest of the bike is how it was when Jeremy owned it. The seller apparently got the bike from McGrath's doctor, who had it for 20 years.

So, buy this bike, and then you'll be just like McGrath - minus the speed, the guts, and the trophies!

Find this CR for sale in Menifee, California with bidding up to $4,050 and the reserve not yet met here on eBay.

The Colson Corporation sold bicycles between 1917 and 1953, typically through retailers like Goodyear and Firestone. So, why are you seeing one on a page about motorcycles? Because this first-year Colson bicycle is equipped with a Smith Motor Wheel! Around 1910, Arthur William Wall developed a direct drive motor wheel to power a bicycle – it was the first to be powered by gasoline. Four years later, manufacturing rights for the motor wheel were acquired by the A.O. Smith Corp. of Milwaukee and it led to what you see here.

The wheel was powered by a 1-1.5 horsepower motor and it drove a 20-inch wheel. Mounting the motor wheel to the rear tire of a bicycle enabled a top speed of about 20 mph with a fuel range of ~100 miles on a 1-gallon tank. Approximately 25,000 of the Smith Motor Wheels were produced.

Eventually, the Smith Motor Wheel was sold to Briggs and Stratton, who improved power to 2 whopping horses. They then focused on the motor inside the motor wheel, and that evolved into the ubiquitous Briggs and Stratton motors seen in lawnmowers and all kinds of small equipment. For a lot more information on the Smith Motor Wheel (including great vintage ads like the one above), check out this profile on the Online Bicycle Museum

This bike (Serial #: #15404) utilizes a NOS 28-inch Corbin rear hub with Lobdel wood wheels. The engine is said to have good spark and compression though it last ran two years ago. The motor has an Elkart mag and all parts are either original or NOS, there are no reproductions.

Find this Smith Motor Wheel for sale in Deerfield, Ohio, with bidding up to $5,400 and the reserve not yet met here on eBay.

At this year's Retromobile show in Paris, an incredible collection of 10 AJS 7R race bikes stood out among a sea of beautiful automobiles. Said collection spanned from 1949 to 1962, and it was part of the collection of Bernard Guérin, a post-WWII racer who somehow kept his old race bikes as he acquired new ones.

Also known as the “Boy Racer” due to its 350cc of displacement, the AJS 7R was a production racer designed by Phil Walker. Introduced in 1948, the bike went through a graduation evolution – by ’54 the engine was putting out 40 hp at 7,800 rpm and won the Isle of Man TT. It weighed 285 pounds and was capable of hitting nearly 120 mph.

If this isn't drool-worthy enough, apparently Guérin applied this same style of "keep my old racers while I buy new ones" with some Velocettes and Nortons, as well. Find this insane collection for sale in Dusseldorf, Germany, here on Movendi. The price is not officially listed on the site but at the Retromobile show, a price tag of €750,000 ($795,937) was on display.

First registered in the United Kingdom in 1958, this gorgeous hybrid features a customized Norton featherbed frame with a Vincent Rapide V-Twin engine. What a beauty.

The bike shows 35,077 miles on the odometer but with a build like this, who knows if that's the true mileage. It retains the original number plates and last registration (the seller doesn't specify what year that was or when the bike was imported). The seller notes that the frame (wideline featherbed) was modified so that the Vincent motor/transmission did not have to be tweaked.

Find this Norvin for sale in St. Louis with an unmet (and insane) opening bid of $50,000 here on eBay.

Rokon was founded in the early 60s with the intent of developing a "moto-tractor" that featured two-wheel drive. This task was achieved with a combination of shaft, chain, and belt drives, and it enabled riders to go nearly anywhere - as long as they weren't in a rush!

Older Rokons are powered with a 130cc Chrysler engine, which was good for a top speed around 20 mph. You probably expected that. What you may not expect is that the wheels are able to store liquids such as gasoline or water for long-distance trips.

This example was originally bought new by the seller's grandfather, who used it on a Christmas tree farm until last year. It's claimed to be 100-percent original and always maintained properly - everything works as it should and it's only been used off road. I adore one-owner bikes that have been enjoyed for so long. If you're the same way, find this Trailbreaker for sale in Hagerstown, Maryland, with bidding up to $787 and the reserve not yet met here on eBay.