#SheRides: No Need to Fear the Super Duke 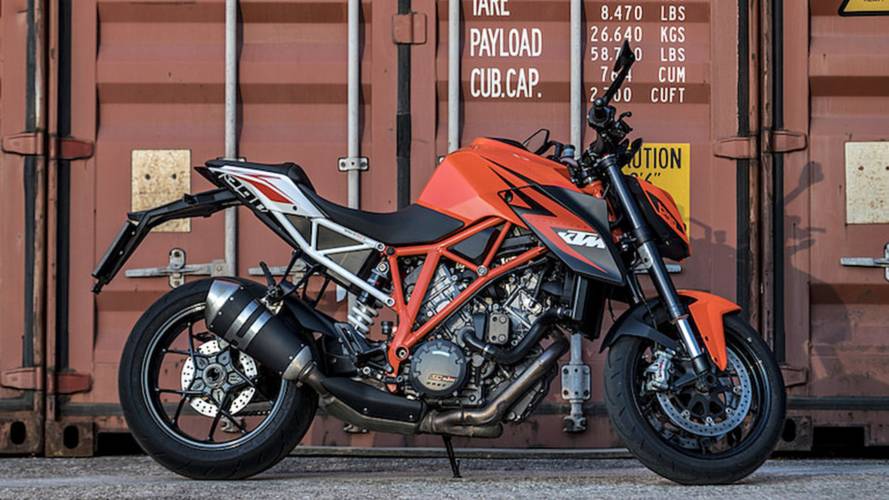 SheRides the Super Duke and finds a heart of gold under that gruff exterior.

I always underestimate myself.

In this case, I underestimated my ability to ride a “SUPER” big bike, which I define as a sportbike (full-fairing or naked) with 160+ horsepower and monster torque to match. Initially, I didn’t want to do it; getting to the point where I finally kicked my leg over a KTM 1290 Super Duke was a long journey. But man, was it worth it.

Life in a Tamed-Bike World

The biggest bike I’d ever ridden before riding the Super Duke was a Suzuki GSX-R750. That bike wasn’t the easiest thing to ride at first, but I eventually got the hang of it. But I also eventually got rid of it, because it was a lot of bike for the streets, especially commuting. And wanted something that was a bit more back-friendly. I “downgraded” and got a Yamaha FZ-09, and at that time, I also had a few races under my belt.

Overall, I was happy with my decision and even completed my tamed-bike family with a small Suzuki DRZ 125R dirt bike I had picked up a few months earlier. My then boyfriend (now fiancé) added to the clan with his 2009 Triumph Street Triple.

Yup! This was how it was going to be for the time being, and I was perfectly content with that.

When Fear Comes Knocking on Your Door

My fiancé, Greg, decided to shake things up last year by heading to a dealership that sold KTMs. I went along with him since he mentioned that he was “just going to look at the Super Duke.” I knew this was a potentially bad idea because he'd had his eye on this Beast for a while.

When he first entertained the thought of purchasing one to replace the ‘Rumph, I did some research on the bike. I immediately concluded that it had a whole lot of “nope” coming from me. Specs included things such 1301 c V-twin (nope!), 178 hp (double nope!), with 108 foot-pounds of torque (haha… yeah, nope).

Comic by The Oatmeal.

I feared for Greg’s life; and at the time, I felt it was justified. This thing had a crap-ton of power and wasn’t necessary for what he would primarily use it for, which was to commute to and from work. It’s also a pricey bike at $17,000. I seriously tried to talk him into instead getting the latest and greatest Street Triple, but I wasn’t very convincing.

On that chilly October day, Greg purchased the Beast. I felt that if anyone could tame it, it was definitely him. But alas, the Super Duke even intimated him initially – the first time he tried to get it out of first gear he stalled it. He knew what this thing was capable of…

Deciding to Let the Fear In

Once we got home, Greg said it wasn’t bad to ride. He mentioned that I should ride it some time. I immediately said no. He tried to coax me into it. I continued to refuse. So, he dropped the subject…for a while.

The Duke's first night at its new home.

And when I say he dropped the subject, what I mean, of course, is that he would frequently bring it up: “You should ride my bike.”

And the one that I found hard to believe: “It’s actually easy to ride.”

He told me these things often enough that I started thinking about it, but never seriously. Then, he brought out a good arm twister – he asked me: “How are you going to become a better rider if you don’t ride bikes of all shapes and sizes?”

I do! I do want to become a better rider. So, I said, fine. But just because I told him that I would ride the bike didn’t mean I took off on it the next day. It still took time before I kicked a leg over the Super Duke.

Prior to hopping on, I read a few more reviews and realized I may have been fearful of a situation that I should have never feared in the first place. Besides, I was sure there were plenty of women who rode this motorcycle; I told myself the Super Duke was most likely a bike that guys and gals enjoy and rip around on all the time.

Well, not so much. Further research showed this particular KTM wasn’t a crowd favorite with us gals. I decided to Google “Woman Rider KTM 1290 Super Duke.” Mainly to make myself feel better about riding the Super Duke (after all, empathy helps – for me at least).

The internet search didn't really make me feel better. Most results featured thin women in orange bikinis. I don’t think they rode the Beast in that attire. But one of the few things I found of worth was this video from moto-vlogger Laurie Jennifer, who took the Super Duke out for a test ride and gave her first impressions. Seeing her impressions made me feel better.

In total, about five months passed between Greg's buying the Super Duke and my deciding to finally ride it. We were at a track day earlier this summer and he, once again, asked if I would like to ride his bike. I gave in. Deep down, I knew everything would be fine, but I still had the heebie-jeebies, especially when I factually got on the bike. It was incredibly foreign sitting on the Super Duke; "it made me feel like I didn't belong," is the best way to describe it.

Fear can be Fun

I headed out on track and pranced around the corners. The Super Duke definitely wasn’t thrilled with my granny speed, but he accepted it and did just fine. Once I'd made my way around the track to the front straight, I decided to awaken the Beast. I rolled the throttle open and was immediately pulled back into the seat. I felt the front end go light. Since this bike has an anti-wheelie feature (thank goodness), I didn’t loop the thing. I also didn’t let off. I kept on! I laughed in my helmet and all the bad feelings were replaced with the good ones that come along when you ride two wheels.

Before I rode the Super Duke...

...After riding the Super Duke!

Immediately after, I took the KTM to the streets. I got those heebie-jeebies again since the street is considerably more dangerous than the track. I also had to lane split and potentially dive out of the way on a bike that had a lot of grunt. Lo and behold, though, the Duke was fine in traffic. It made for a joyful commute to work.

By riding the KTM on the streets more often, it made getting on a less powerful liter bike, like the Yamaha FZ-10, a piece of cake. I was incredibly comfortable and confident on the big Yam, and have Mr. Super Duke to thank.

I guess the point of the story is: don’t knock a bike ‘til you try it. I encourage everyone to get on bikes that you deem intimidating. Be open minded and don’t underestimate yourself, especially if you’re an experienced rider. If you’re intimidated by a moto, definitely try it out at on a stretch of road or area that you’re comfortable with. (For me, it was the track, since I knew there was runoff in case things went south.)

I’m excited to have a SUPER big bike in our fleet that I can finally ride with confidence. Would I ever buy something this large for myself in the future? No. Well, probably no. I’m content with my “tamed” motos, and really don’t need something that powerful for the streets.

However, I’m a firm believer of never say never...