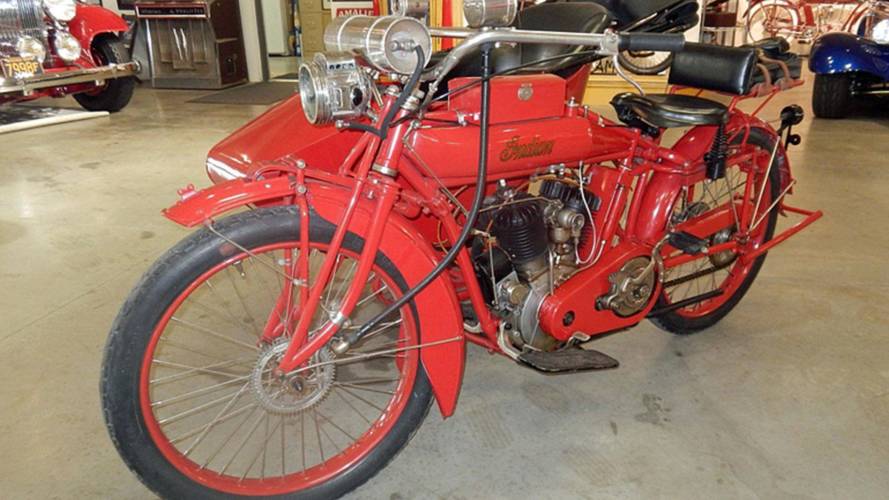 In this edition of Bike-uriosities we take a look at an Indian Powerplus Sidecar, Kawasaki KDX200, Norton Esquire, Suzuki TS125 and an fake Indian Drifter.

The Indian Power Plus was a successful roadster and a nice clean canvas for building race bikes. This was especially true for Erwin “Cannonball” Baker (after whom the Cannonball Run was named after) who built his name on the back of these famous Indian motorcycles. Today we’ve got an example that forgoes the racing pedigree for the utility of a sidecar. Hemmings Collectables even calls this "the engine that changed American motorcycling."

In the beginning of 1916, Cannonbal Baker went to Australia to test the motor in a Power Plus, and he was able to cover 1,027 miles in 24 hours. The 1,189cc V-Twin was good for eight horsepower, enough to propel the 430 pound bike up to about 60 miles per hour. MSRP at the time was just over $500. Racing versions of these bikes were capable of 15-18 horsepower, and speeds over 120 miles per hour – setting records at the time. This engine was also the basis for the famous 1920 Scout that Burt Munro turned into the World’s Fastest Indian. Want to learn more? Check out this article from Hemmings about why this particular engine was so revolutionary.

This motorcycle (VIN: 83H583) has 9,122 miles but the seller has "never tried to start or drive this bike" as he just used it for display. Normally I'd just consider that code for "I can't get it to start and it sounds nicer if I pretend I never tried" - I mean, how could you not want to take this piece of American motorcycling history for a ride? But hey, maybe he's telling the truth, I obviously can't be sure. Either way, it comes with a top and side curtains for the sidecar and a clean antique title in Pennsylvania.

Note that this bike sold at a Dan Morphy auction in October of 2015 for $29,000 (plus fees, I believe) Find this Powerplus with sidecar for sale in Lancaster, Pennsylvania with bidding up to $30,101 and the reserve not yet met here on eBay.

In 1994, Denny Berg worked with Cobra USA to take a Kawasaki Vulcan 1500 and create an "American Classic" custom. It was a success on the show circuit, and the next year Kawi released a "Classic" version of the Vulcan. The next year, Kawasaki went back to Cobra, Denny, and Don Emde (son of the legendary racer Floyd Emde) for help with another job. Don wanted to build a bike that looked like an Indian Chief for a feature in Rider Magazine. Starting with a Vulcan Classic, the team came together with the thought of what Indian might build if they were building bikes in the mid 90s. It got such positive attention, that Kawi decided to make a limited production model called the Vulcan Drifter. The original idea was to build just one or two per dealership, though after the first year it became a full production run - and Kawasaki even offered it in a 800cc displacement as well. This example stands out as it was customized by Bob Stark, also known as Mr. Indian, to look very close to a 40s Indian Chief.

The Vulcan Drifter became a cult bike because many riders found it to be the perfect compromise of 40s looks with modern technology. For all the information you could want on the Drifter, check out Vulcan Drifter Riders - truly one of the most comprehensive sites dedicated to one model I've ever seen. Click here for a promo video on the Drifter back in 1999.

This example (VIN: JKBVNCE115A010148) got several basic modifications - Indian badges on the tank, leather saddlebags, running lights, the Indian War Bonnet, and a few other touches. It looks like it was supposed to go up for sale at the Bonhams auction in Las Vegas last month but the lot was amended. Estimated sale price was $5,000-$6,000. Find this Chief lookalike for sale in Gardena, California with bidding up to $4,100 here on eBay.

You're probably familiar with the Triton, the pairing of a Triumph engine in a Norton Featherbed frame. Maybe you've even heard of amusing variants like the Narley (Norton/Harley) or the Norvin (Norton/Vincent). But have you heard of the Esquire (because I sure haven't)? The "Esquire" is apparently the name of a conversion wherein an Ariel Square Four engine is thrown into the venerable Featherbed frame. It's been done before - Bonhams called this hybrid a Noriel or Arton, and Jerry Romano dubbed his build the Square Norton.

I cannot find any information on this bike, so I'm tentatively going to have to take the seller's word on it. According to him or her, this period build custom paired a 1956 Square Four engine with a 1959 Norton frame. It was built in California in 1963 and was one of three builds completed that year by the manufacturer. It's claimed to 'handle and perform flawlessly', and it sure as hell is different. Is it $15,000 worth of different? You tell me.

Kawasaki introduced the KDX line as a small enduro back in 1980. In 1986. It was so popular that they revised the KDX200 a few times, adding in lots of features from the KX125 motocrosser, which made Kawasaki one of the very few manufacturers offering a two-stroke enduro at the time. It was well loved by riders, so much so that even Kawasaki introduced a 250cc version of the KDX five years later in 1991. However, most people preferred the 200 example pictured here.

As a '87, this is a "C" model. That means it is equipped with the new KIPS power valve system, 43mm fork, new Uni-trak rear shock, and a disc brake up front. It still came with the rear drum brake though. Dry weight was 223 pounds and the fuel capacity was a practical 3.3 gallons. For more on the KDX, check out this model history from Dirt Rider.

This example has been fully restored and it was featured at the Toronto Motorcycle Show as recemtly as February, 2017. The seller said the restoration took five months and cost over $3,000. He has the right idea - buy it and get it dirty! Find this KDX for sale in Halton Hills, Ontario, Canada for $2,950 Canadian (or $2,250 USD) here on Kijiji.

We're going to stick with the two-stroke enduro theme here, so grab your Jofa mask and goggles. The TS range was Suzuki's first line-up of trail bikes, and the family of two-strokes was available with motors ranging from 50cc to 400cc. Some riders considered the TS185 to be the best - it was actually a few pounds lighter than the TS125 but it made nearly as much horsepower as the TS250.

The 1973 model (also known as the K or the Sierra) featured a yellow/green paint livery. Everything else was nearly the same as previous years, except for a different exhaust heat shield and a painted front fender. The dry weight was 218 pounds and the 183cc motor produced 17.5 horsepower at 7,000 rpm. For more specifications on the TS185, check out this model history on Suzuki Cycles.

This example has an amusing listing - the seller is all about trying to get you to think back to the days when you used to 'let the good times roll', instead of 'just letting your wheelchair roll.' The bike is said to be all original but not perfect. It has a clean title and runs 'great.' It's plated and seems to be missing mirrors. Find this TS185 for sale in Burien, Washington for $1,800 here on Craigslist.