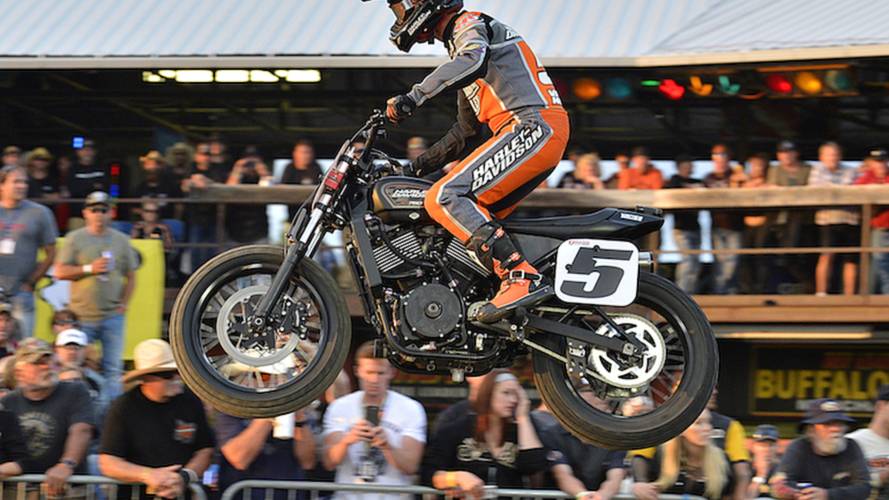 Factory Flat Track rider Jake Johnson put the Harley-Davidson XG750R on the podium with a third-place finish at the Buffalo Chip TT last weekend. A packed crowd at the Chip Campground watched a heated battle between Kawasaki, Indian, and Harley riders on the nine-turn half-mile TT scrambles circuit. Johnson scored the first podium finish for the new XG750R flat tracker and his best finish of the season.

“This feels as good as a win,” said Johnson. “Obviously we want to win every time we line up, but the team has been working so hard this season with a new bike and to finally come through and get on the box is a real confidence booster. We know we have the speed and the bike was really working great tonight.”

At first the race was dominated by TT specialist Henry Wiles on the DPC Racing Kawasaki, but after the second red flag re-start his bike sprang an oil leak and had to retire. Briar Bauman put his Zanotti Racing Kawasaki across the line first, followed by the Indian FTR750 of Jared Mees and Johnson’s Vance and Hines-sponsored Harley.

"It's been a rough year," Johnson admitted. "I was looking forward to coming here. I knew this race was going to be tough, but I also knew that TTs are my strong point. I've just got to thank the whole team – Harley-Davison and Vance & Hines and everybody behind the effort. They've been working so hard all year, and we've just been getting beat up. To do this for those guys… I don't even know what to say. It's been a long time coming, and hopefully, this means good things are ahead."

Johnson was in the mix all night as the AFT Twins racers battled for the first time ever in the middle of the Buffalo Chip campground complex on a course that included the season’s only right-hand first turn and a jump on the back stretch.

“The track was really tough. It was like racing on a go-kart track,” said Johnson. “And the crowd was wild and right up to the fence. You could look down and see the fans when we went over the jump. We even had zip-liners flying overhead. It was really fun to be racing here in front of all of these motorcycle fans at the center of Sturgis Rally action.”

Harley-Davidson has been struggling to keep pace with both the well-developed Kawasaki Ninja 650 twins and the purpose-built Indian FGR750 all season. (The Indian Motorcycle tracker is available to privateers for $50,000.) The Harley XG750R was developed from the company’s production Street 750, but is sadly not offered as a production model.

“The Revolution X V-Twin engine is for sale through Harley-Davidson dealers today and can be modified for racing use by aspiring dealers and privateers,” said The Motor Company in a published statement.