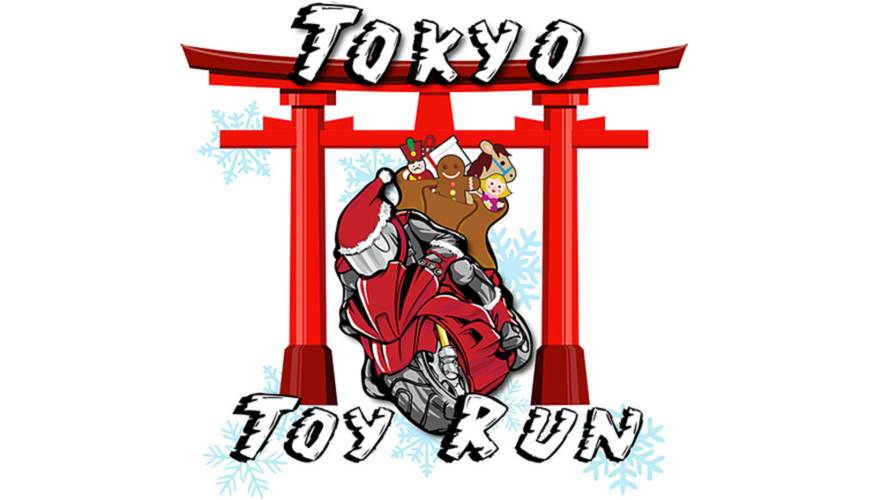 Graham delivered a little Christmas cheer to kids in need on the 2017 Tokyo Toy Run.

Christmas cheer in the Land of the Rising Sun.

Feature photo courtesy of Tokyo Toy Run. All other photos by Graham Briggs

Toy Runs are a relatively big part of motorcycle culture. Well, at least a certain segment of motorcycle culture. You know what a toy run is, right? A bunch of riders get all dressed up in Santa outfits (or reindeer outfits, or Mrs. Claus outfits, or elf outfits... you get the idea), decorate their bikes with Christmas lights and ornaments, and ride around in the winter to collect toy donations for needy kids. When was the first toy run and where? I have no idea, but I can tell you when my last Toy Run was  – mid December 2017, to two children’s homes just to the west of Tokyo as part of an event called the Tokyo Toy Run.

The Tokyo Toy Run started as an idea on a local motorcycle forum and a phone call to a local children’s home in late 2009. The event is, in the words of the group's website, "Organized by foreign and Japanese riders in Japan, to benefit Japanese children in orphanages in Japan. We hope to encourage riders around Japan to organize Toy Runs in every prefecture, so that orphans all over Japan can experience a day of fun and the friendship motorcyclists show to one another. It is our way to give back to the community and promote friendship between all motorcyclists in Japan. Reason: To make Christmas and New Years a happier time for children who live in orphanages in Tokyo, Kanagawa, and Yamanashi, Japan."

This year, our main meet-up point was at the large Ebina service area on the west bound side of the Tomei, one of the main expressways out of Tokyo. The area has a generous motorbike parking section where we could all get together, have a chat, and have the pre-run briefing without causing issues for other road users. That said, plenty of drivers slowed down to take a closer look at us on their way out. We were a pretty eye-catching group in our holiday get-ups. The bikes ran the gamut from sports bikes to ADVs to Harleys, and there was even a lone Vespa. For the chase car, someone brought an old Beetle to carry additional toys, supplies, and assorted children. Each machine was decked out with tinsel, small Christmas trees, gifts, reindeer antlers, and other holiday flair.

After the briefing, we set out for our first stop. A toy run is fundamentally all about the kids, and over the years we’ve tried to give the homes what they need for the kids. Often that’s been simple things like shoes, socks, and sporting gear, but there’s always space for Lego, books, drawing equipment, and more besides. Along with the presents, we quickly found out that the kids love watching all the bikes ride in in procession, so we try to do that as much as possible. Once the parade's over, it’s time to put the gifts in the designated area and then get on with socializing, handing out Santa hats, and getting on with some games.

READ MORE: Gift Ideas For Your Girlfriend That Rides

The kids love to sit on the bikes too, and while warnings about hot engines and exhausts are the first things we say after we roll up, we do let them sit on the bikes under strict supervision. Another of our guidelines is to not rev the bikes at the venue, as we don’t want to upset the neighbors. Unfortunately, when a 10-year-old sits on an R1 they seem to know what a throttle is for so we have to keep a keen eye on right hands after a couple of red line incidents early on.

One thing we learned before we even fired the bikes up in 2009 was the need to protect the kids privacy. Some are orphans, some are at the homes during the week as their parents can’t cope full time due to their own situation or if the child has special needs, and some are placed in care as their parents have been abusive. That means there’s no photos of the kids, except by designated photographers from the home, and there’s no exchanging of personal details.

The organisation behind the event is quite loose – a website, some people who liaise with the homes, and that’s about it. The rest of us do bits off our own backs and take our own responsibility. We keep it to people we know and request introductions beforehand for new riders as attendees come and go. How long will we do it? Well, as long as the homes and the kids want it really. It’s always a good day out for the riders, and delivering some much-needed Christmas cheer to kids in need is a great way to give back over the holidays.