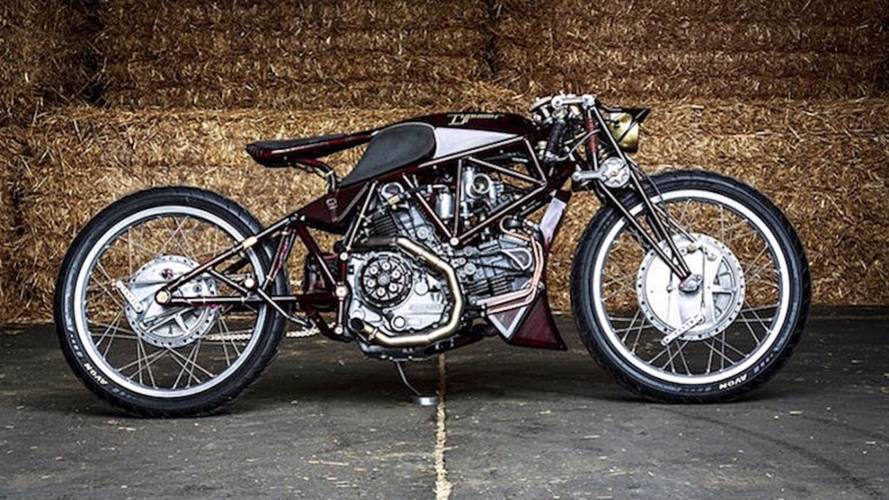 This steampunk Ducati 900SS board tracker reminds us that sometimes the oddest of recipes can yield surprising results.

Making a steampunk board track racer custom out of a mid-’90s Ducati superbike admittedly doesn’t sound very promising on paper. Like at all. But the team over at Old Empire Motorcycles managed to do exactly that, defying the odds and delivering a truly unique and exceptional one-off build in the process.

A generous helping of bespoke handmade parts not only further the Typhoon’s cohesive visual theme, but also harken back to the glory days of pre-Great Depression race machines, which were also largely comprised of hand-crafted, one-off components.

This impressive two-wheeled work of art and engineering was done by Old Empire Motorcycles, a well-established customs shop in Norfolk, England. Founded three quarters of a decade ago, the shop is run by Alec Sharp and Rafe Pugh. Alec is responsible for what the shop calls its “Imperial Builds," aka in-house projects that haven't been commissioned by a client. The sky is the limit with these and there are little to no time or financial constrictions. The Typhoon, you might be able to guess, is an Imperial Build.

Pugh, meanwhile, takes care of marketing – or what Alec calls “building a story around a bike” – as well as all the shop’s leather-work and tooling.

“It’s been a bloody good combination for us so far,” Alec said.

Unsurprisingly, OEM has amassed an impressive collection of trophies over the years, taking home prestigious awards including Top 5 Custom Motorcycle Builder in Britain 2017 list, Cafe Racer TV's Top 10 Motorcycles 2015 list, MCN's Top 3 Custom Championship 2015, Malle Mile's 2015 Best of Show, Pipeburn's Top 10 Bikes of the Year in both 2014 and 2015, Top 3 Motorcycles of 2014 for both King of Fuel and Silodrome, Yahoo's Most Beautiful Motorcycles of 2014, and many, many more.

The project started out as a used 1995 Ducati 900SS and would end up taking roughly 18-24 months to complete. Interestingly Alec didn’t go into this build with a predetermined design; instead he allowed the build to more or less dictate itself, based on the lines and style of the donor bike. A major focus of the build – in addition to creating something fun and unique – was to retain some of the key aesthetic elements of the 900SS, especially its iconic Pantah-based 904cc air-cooled L-twin, in which each cylinder is fed via dual Desmodue valves. This would be the jumping off point for the build.

READ MORE: We Ride the 2017 Ducati SuperSport and Like it! | RideApart

First the crankcase was replaced with a modified version of a unit used on a Ducati 851. Next the SS’s factory respiratory equipment was chucked aside to make room for twin Amal GP3 carbs and a bespoke stainless steel dual exhaust system from Chris Tullet Exhausts. Finally a custom pull-type starter was thrown into the mix, furthering the build’s old school flavor.

After this, the Ducati donor’s electrical bits were handled, a new custom braided wiring loom was patched in, and hand-tooled leather electrical side pouches and a leather “battery satchel” were added. Custom ignition, lights, and microswitches were tacked on as well.

Next came the chassis. OEM got to work, firing up the acetylene torch and chopping up the donor’s stock chrome-molybdenum steel trellis frame, to create what OEM calls "a hardtail that’s built for racing." This meant welding the swingarm to the frame, as well as the unsprung subframe that was made to support the custom’s multi-piece saddle.

Married to the hardtail chassis is a set of custom single-spring girder forks, the antique vibe of which is amplified by a traditional circular headlight – creatively fashioned out of a salvaged brass bell – and a 21-inch spoked-rim fitted with quad leading shoe drum brake. The rear end of the frame grabs onto another 21-inch wheel with a single leading shoe drum. Both rims are wrapped in skinny Avon tires that practically scream “board track racer.”

The bodywork would be the next phase in this ambitious project. A handmade “twin-tank” fuel cell with copper plugs was crafted, which mimics the profile shape and lines of the SS’s stock tank – though, ultimately, it has a lower profile. The tank was designed to seamlessly blend into the seat. A set of custom suede kneepads were added, too, made from the same material as the bespoke two-piece saddle. A large bellypan-type piece boasts sharp angles, giving the bike a more aggressive silhouette while simultaneously doubling as a kind of radiator cowl. Lastly, a subtle headlight shroud tops off the custom brass headlight unit atop the girder fork.

The paint on the Typhoon - courtesy of Morley Brothers Paint - plays an interesting role in its overall appearance. The machine’s livery consists of a dark maroon hue that’s been treated to a marbled wood-like effect that gives the bike a seasoned  antique look. The heavily modified chassis also received a coat of the marbled maroon - a color deliberately selected for the purpose of better contrasting with the brass and copper components found throughout this Imperial Build. The tank is also adorned in brass-colored “Typhoon” lettering as well as matching pinstriping around the suede knee-pads and on the headlight shroud. A subtle “REMADE IN GREAT BRITAIN” decal - complete with Union Jack (Or Union Flag if you're inclined to quibble about semantics –CC) - is slapped on the back of the hardtail for good measure.

The final stage of this build consisted of tacking on an extensive number of small handmade doodads that help to give the bike its steampunk vibe. Instead of settling for steel-braided lines, the OEM boys opted to utilize copper tubing, as well as some bespoke taps and filters. The decision to source brass hardware was a clever one and though it’s an incredibly minor detail, it undeniably adds to the custom’s dynamic and well-rounded feel, as do other subtle accouterments, like the bike’s brass steering cap.

The reverse handlebar setup - with reverse lever assemblies and inverted levers - places this bike squarely into the board tracker category. The build’s vintage feel is dialed up a notch thanks to a set of custom handmade “go faster” rear-sets/pegs - which, like parts of the girder fork, have been wrapped in leather. Another particularly cool touch is the use of hand-machined controls and a bevel style throttle. Continuing with the bespoke-theme, OEM would call on GuageRepairs.com to build a custom set of instruments in brass housing: speedo and tach units complete with OEM’s Lion-logo.

Like all of OEM’s high-level builds, the Typhoon borrows its moniker from one of the automotive, aeronautic, or maritime greats that came before them. In this case, the lauded GMC Typhoon SUV that was produced from 1991-1993. No, not really. The Typhoon build gets its name from the well-known British fighter aircraft.

“(The name is) a slight nod of recognition to the people who designed and built these machines for us to be inspired by today,” explained Alec. “I guess you could say we ended up with some kind of modern day board tracker, but ultimately I just wanted to build whatever most suited the lines of the original motorcycle. As with everything, there are little bits I would have done differently in hindsight, but overall the result is something that I’m really pleased with.”

There’s something universally appealing about board track racers. No matter what style of bike you’re into, chances are it has some lineage going back to board track racers of the 1910s and ’20s (especially in the United States). I can only imagine how hardcore Ducatista purists must feel about this steampunk Duc, but even if it’s not your cup of tea, it’s hard to deny the obvious quality of design and craftsmanship that went into this bespoke two-wheeler.

I’m personally happy to have the steampunk craze now largely in the rearview mirror, but I'll readily admit that this is a pretty bitchin' use of the style. The attention to detail is close to obsessive, and this bike can be appreciated on multiple levels; from a distance it’s a gorgeous machine, but more intimate inspection reveals countless meticulous and artistic touches. I also really admire the guys at OEM’s ability to retain so much of the donor’s stock trellis frame. The guys at OEM also had a little promo-video put together for this project that continues the tradition of ridiculously poor-lit teaser vids in the moto-industry. This bike wasn’t engineered or built for raw performance (few things today with girder forks are), but its creativity and top-notch execution have rightfully earned it the spot as this week’s Bike of the Week.

If you know of a bike that you think deserves to be RideApart’s next Bike of the Week, drop us a line at info@rideapart.com