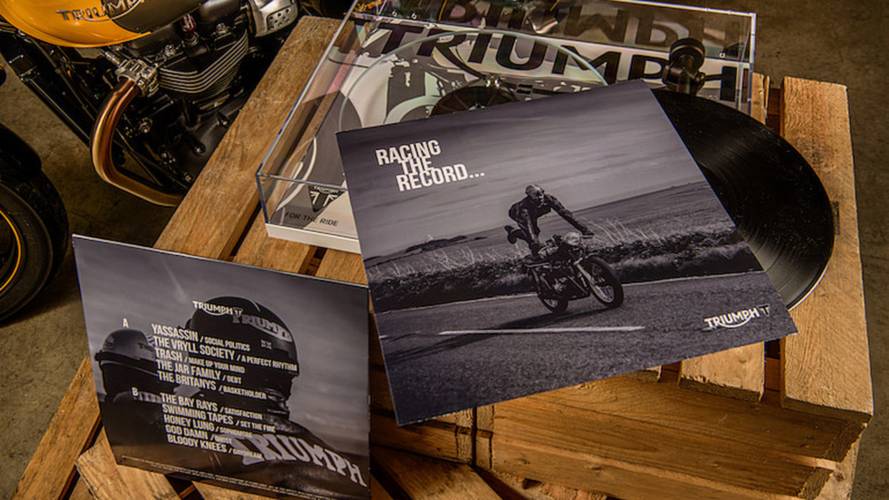 Triumph has created its own vinyl record and turntable, inspired by the rock ‘n’ roll heritage of its Street Family of bikes.

Triumph Motorcycles has teamed up with sound equipment manufacturer Rega to issue a commemorative turntable and vinyl record inspired by the British brand's Street Cup.

The record and record deck are set to be present at a Bike Shed taking place 29 August in London. Fans will get to hear the record, and a handful of the featured bands will provide live entertainment. The album is entitled Racing the Record, a nod to the fabled British cafe racer practice of selecting a record on the jukebox, then zipping out on your bike to ride a predetermined course before the song finishes.

The record features a number of up and coming British rock artists and only 500 copies will be pressed.

READ MORE: Better Than Ever: We Ride the Triumph Bonneville T100 | RideApart

The turntable. meanwhile, takes its inspiration directly from the 1960s-inspired Street Cup model. Adorned with a line drawing of the bike and finished in the bike’s signature Racing Yellow paint color, the turntable is fitted with a hand-assembled, precision-built RB110 tonearm, a low-vibration, low-noise 24v motor assembly driving a precision bearing and 10mm float glass platter fitted with a custom-printed plinth and mat. Only two have been made and for a chance to win one, you should keep an eye on Triumph’s social media channels – Facebook and Twitter.

Tickets for the Bike Shed event are limited, however a select few will be able to win an invite via Triumph’s social media channels.