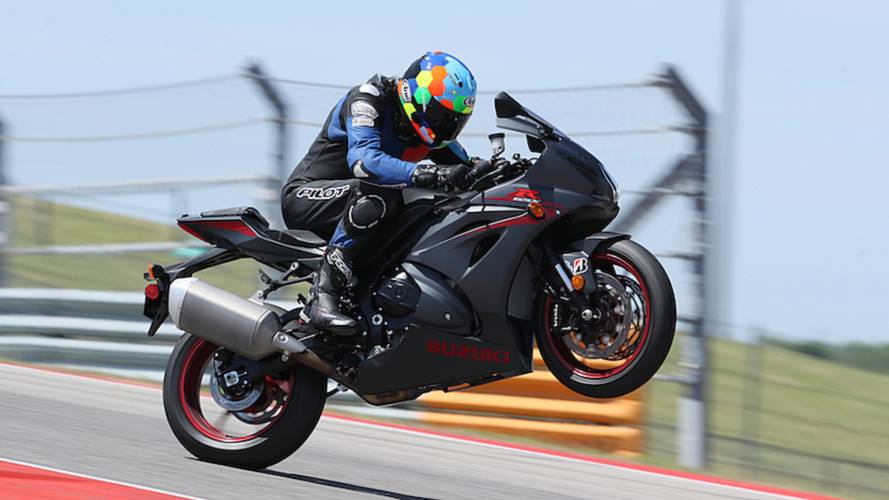 The stalwart champ of the sportbike was heavily updated for 2017. We throw a leg over to find out whether all the changes have been for the better.

But like most things in life, tastes shift, technology advances, and the competition gets tougher. Now the Hamamatsu, Japan factory jumps back atop the once again red hot liter-bike class with its overhauled Gixxer 1000.

From outside in, the GSX-R bristles in new technology designed in collaboration with its GSX-RR MotoGP bike. But what’s it like to ride? We have the answers after having logged seat time on the US $14,599 base model at the Circuit of the Americas 3.42-mile road course, and the surrounding Austin, Texas, countryside following the one and only North American MotoGP round this past spring.

Up close, the flat boxy lower body panels afford a sleek and contemporary industrial finish. The frame spars, seat juncture, and rest of the chassis appear more svelte and some of the hardware lines harken to the old air-cooled GSX-Rs with their double-cradle perimeter beam frame.

Seated at the controls, this machine is racier-feeling. The seat is taller, with a more weight-forward slant. The clip-ons have a marginally lower and more aggressive bend. It's also narrower from nose to tail, but the 4.6-gallon steel fuel tank remains sizable. Although skinnier, it still feels like a real-sized motorcycle and will be appreciated by Toni Elias- and LeBron James-sized riders alike.

As usual the windscreen is tall, making it easy to tuck behind around the circuit as well as affording a calm wind-diverting ride on the highway. The rider’s footpegs are fixed (as opposed to the adjustable setup on its predecessor) however they are a nice balance between track and street. As always, the GSX-R is a tolerant sportbike for all-day rides. Add some Cortech soft luggage and now you have a CHP-out-running sport-touring rig.

Similar to Suzuki’s updated SV650, the GSX-R employs Suzuki’s Low-RPM Assist feature. It automatically feeds fuel into the engine (increasing RPM) as the clutch lever releases. This makes the motorcycle easier to get rolling from a stop. It’s a curious feature considering the more experienced demographic of a Gixxer rider, but a neat feature nonetheless.

Suzuki engineers have a knack for striking the ideal balance between sportscar-out-running bottom-end power and a draft-passing top-end. This variable-valve-timing equipped Gixxer is no exception, delivering the broadest power yet. Where other engine’s have a “sweet spot," this Suzuki makes useable power everywhere. Rev it high, or lug it low, and in typical GSX-R fashion, power is crisp, torquey, and well-metered. The old GSX-R was no slouch, but this larger-bore I4 delivers more muscle at any rpm, plus it's ready for track duty with its 1000 rpm taller rev ceiling— spinning to a lofty 14,500 rpm before the rev limiter shuts down the fun. Engine vibration remains muted but there is a scant more buzz from the new motor. Yet it’s not enough to disrupt its overall pleasing character on the street.

READ MORE: Cycleweird: The Wortst of All Worlds – Suzuki's RE-5 | RideApart

Of course, the sound is pure GSX-R. Yes, engineers conservatively fitted an humongous titanium muffler to keep US government agencies at bay, but the truth is, you still hear something special brewing inside. Not quite as attention grabbing as the crossplane-equipped or V4-powered competition, sensitive ears will ascertain its unique exhaust note. We can’t wait to hear how good it sounds uncorked with a Yoshimura Alpha-T slip-on muffler.

The 2017 bike is the first Gixxer to employ a full ride-by-wire throttle, replacing the mechanical connection for sensors. It continues to be augmented by Suzuki’s returning S-DMS technology adjustable throttle maps. "A” mode is the most aggressive setting with the sharpest, and most sensitive response. Most riders will likely gravitate toward the "B" setting, offering a smoother and more organic feel similar to previous GSX-R1000s. "C" mode, on the other hand, reduces engine response, and is ideal for sketchy road surfaces where the rider demands the utmost in control. Like before, handlebar-mounted buttons on the switchgear allow adjustment on the fly while riding.

Ten-way adjustable and Continental IMU-powered traction control help mitigate wheel spin. The lower TC settings are calibrated for fast-paced, and or trackday riding, while the higher settings are developed for riding in damp conditions, or on more precarious road surfaces. Around COTA’s grippy surface, Level 2 proved to be the sweet spot – neutering engine power just enough to maintain control but not so much to overly impede drive off turns, even on fresh Bridgestone Battlax R10 race tires (RS-10 tires are stock). The system integrates wheelie control but the function is more crude than other manufacturers' production systems. It’s not as rudimentary as early 2009-2010 systems but it could stand some improvement in today’s world.

Despite spending a full day on track, we never got comfortable enough to “lean” on the system and fully trust it. Instead we used it more as a safety net, in a similar vein as a throttle stop on your kids’s Suzuki QuadSport four-wheeler. Still, it did take the edge off things and made the bike more friendly to command during fast paced rides. On-the-fly adjustability is another nice touch, and the settings inside the LCD are easy to decipher.

The LCD dash is large and stuffed with information, including gear position, shift light, and a manual lap timer. Problem is, it’s a tad cluttered. The tiny fuel economy settings are especially hard to read. Another gripe: the yellow low fuel light has been replaced by a icon on the dash that isn’t as easy to see when fuel gets low. However, the GSX-R1000 now includes a fuel level meter, so you don’t have to rely on reseting the trip meter to be conscious of refills. On a side note, GSX-R’s are less thirsty at the gas pump versus the aforementioned competition. We registered around 40 mpg according to the computer during a more conservative non-third-gear wheelie pulling pace.

Power is transferred to a stretched swingarm that does a impressive job of putting each and every horsepower to the pavement. The six-speed gearbox and slipper-action clutch function near perfectly, however we’d love to have the R-spec GSX-R’s standard electronic quickshifter. But considering its respectable $14,599 MSRP – positioning it below some of the older competition – it’s hard to knock Suzuki. If affordability has a place in your buying decision, the base GSX-R checks that box.

Despite only shedding 7 lbs from its ready to ride curb weight (non-ABS model), around COTA’s 20-turn facility we were impressed by how much more maneuverable the bike is, especially from side to side – a characteristic that was readily apparent through the "esses" of Turns 3, 4, and 5. These turns place an emphasis on a motorcycle’s ability to change direction left to right and vice versa quickly. Big 1000cc inline fours typically struggle in these situations, but not this Suzuki.

Overall handling is precise with loads of stability – a trait that modern Suzuki GSX-R’s have been renown for. The function of the older-generation Showa big-piston suspension shines on the road, offering a plush, well-dampened ride, as well as huge adjustment range. However, at the circuit the components don’t do any favors for the all-new chassis, masking a degree of its newfound process. If track days or ultra-high-performance canyon rides are in your future, you’ll be happy to shell out another $2,400 for Showa’s latest and greatest gas-charged dampers. Based on our experience with a certain green manufacturer’s hardware it's money well spent. However for most situations the GSX-R’s standard suspenders perform admirably.

For as long as we can remember, the GSX-R front brakes have been the weak link in an otherwise well-rounded package. Ten-millimeter-larger Brembo rotors replace the Sunstar discs of old and benefit from the Italian company's T-drive. These mounting pins allow for added side to side rotor float, which means more clamping surface at all speeds. The discs are pinched by a returning pair of billet radial calipers, also from Brembo. A radial-pump master cylinder and rubber brake hoses power the hydraulic setup. Always-on and IMU-powered Motion Track ABS is a $400 upcharge, or standard on the $16,999 GSX-R1000R.

In spite of the updated hardware, the brakes are still prone to the same problems that plagued them before at an elevated track pace: fade. After even a couple fast laps, the friction point shifts, requiring the rider to adjust out the position of the brake lever (thankfully it is six-position adjustable) in an effort to get the front binders to actuate more consistently. Though to be fair, at a street pace, where you’re not repetitively braking from 150+ mph to first, second, or third gear speeds, the condition is absent. Avoid excessive brake friction heat and the setup is powerful, easy to use, with a fair amount of feel.

Like always, the rear brake is nearly perfectly calibrated with generous feel and above average stopping force. We didn’t miss the lock-up-free safety of the optional ABS. It’s worth noting that we were highly impressed with the function of the 2018 V-Strom 1000’s Motion Track ABS earlier this year. If you’re a new rider, or one that routinely rides in inclement weather, we’d recommending springing extra for ABS.

As expected, the 2017 GSX-R1000 is improved in most every way. The powerband is more robust and benefits from straightforward electronics that make it friendlier to manipulate. Subtle ears will appreciate the engine’s techie high-rpm shriek that just begs to be uncorked. Still workman-like in function, we were impressed with the real road friendly suspension and maneuverability at speed. If you desire a liter-class sportbike that skates that fine line between everyday nine-to-five type practicality and balls out weekend performance, the Suzuki delivers at a reasonable price.