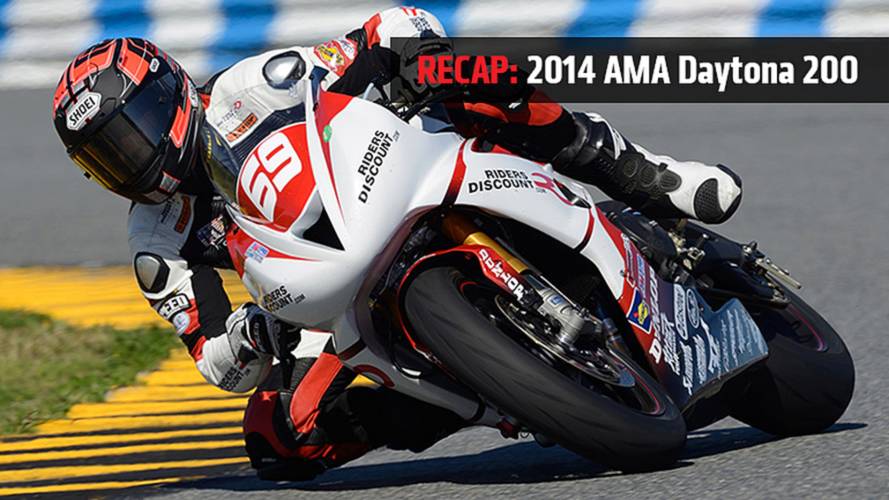 The 2014 AMA Daytona 200 seemed to be the fastest endurance race in history, which also lead to one of the best celebrations in history for one manufacturer.

This past weekend was the 2014 AMA Daytona 200 and if you didn't get a chance to plop down in front of your computer screen for the live stream feed, I've got you covered for nearly everything you missed.

Scott “Mr. Daytona” Russell (AKA the Screaming Chief) does NOT hop on a 750 to win the race for his sixth time but added his usual comedic analysis instead. This is of course, assuming you were able to track the event coverage down. AMA racing at the classic Daytona International Speedway over the weekend was not broadcasted on one major TV or digital network aside from an outdated and cut-rate AMA-provided FansChoice.tv live webcast. However, for the patient and determined, the race stream is a remote option to keep up with the action.

The 57-lap 2014 AMA Daytona 200 event was ran on the 3.5-mile road course configuration at the Daytona International Speedway for the 73rd time on Saturday. The 200 mile “endurance” race seemed more like a sprint race with each laps intensity increasing by the second.

No.69, Danny Eslick, had no problem ripping his Triumph Daytona 675R around the rest of the competition for the duration of the two hour race. Jake Gagne lucked out on lap 38 when the heated battle for 2nd place thinned out after Dane Westby went down in turn one, taking Jason DiSalvo out along with him. This allowed Gagne to put his Yamaha R6 in a comfortable 2nd place followed in tow by 3rd place Jake Lewis and his R6. This was the podium party VIP list after the 200-mile mark was reached and the checkered flag dropped.

Bobby Fong took his Triumph 675R to 4th place and Garrett Gerloff salvaged an impressive 5th after picking his R6 up from an early crash.

The highly-anticipated JD Beach farmed this one, finishing in a lady sandwich between Melissa Paris on her Honda CBR600RR in 27th and Elena Meyers on her 675R in 29th.

Danny Eslick is the first rider to bring a Daytona 200 “W” to the Triumph nameplate in nearly 50 years. Eslick celebrated the win as he took his Triumph off track on the cool-down lap (got a little squirrelly in the grass), then parked on a guardrail where he proceeded to hop a fence, scaled up a questionable short school bus (which was converted to a tailgater’s dream) and joined his fans partying on the roof. Eslick returned to his bike and then proceeded to deliver a third-gear smoke show followed by some front wheel hang time. D-Slick never passes up an opportunity to give the people what they want...and for this, we salute him.

Round 2 of 6 will be held at Road America in Lake Elkhart, Wisconsin and with an extended 2.5 month break, the riders will have plenty of time to bail on their training, take a cruise to Cabo, botch a few motocross jumps, heal up and get back in shape (in no particular order) before the next race.

However, with the recent announcement of Laguna Seca being added back into the schedule, this year’s AMA docket will be slightly less lame. Nevertheless, spirits have been lifted with weekend rumors bouncing around that Old Man Russell is lobbying for a celebrity shot in the 2015 running of the Daytona 200 at the ripe age of 50.

Just the thought of Mr. Daytona cleaning up the field like his glory days of the early ’90’s would soothe the burn of this year’s mediocre AMA schedule.