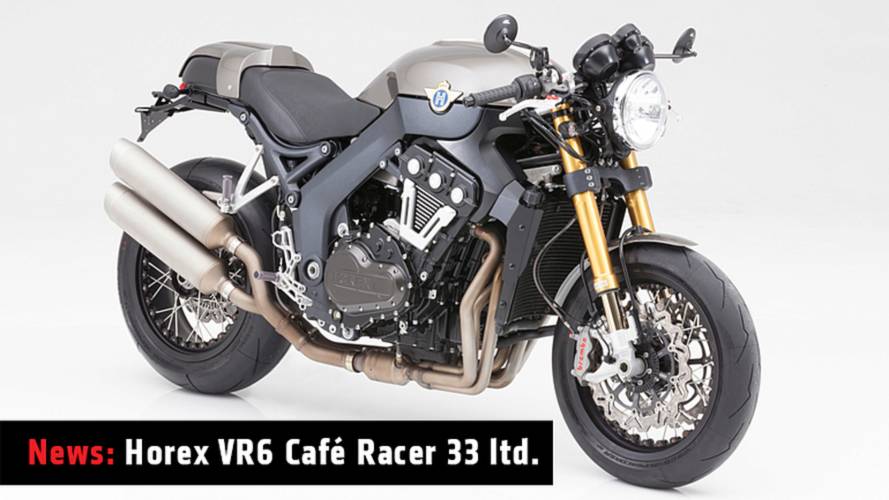 German bike manufacturer Horex unveiled at the recent Dortmund Motorcycle Show a limited edition café racer version of its six-cylinder VR6 roadster that will go on sale later this year for around $44,000.

The Horex VR6 Café Racer 33 Limited joins the company’s existing two model line-up of VR6 Classic and VR6 Roadster that were launched in 2012 However, as the name of the revised model suggests, only 33 versions will be hand built at the Horex factory and will be offered only in what the company calls “a brownish silver” color, priced in Europe at  €33,333.

According to Horex CEO Clemens Neese, "Fritz Kleemann, founder of the original Horex works in Bad Homburg, had an affinity for motorcycle racing. Although we have no plans to get into the racing business, we have a soft spot for fast, purist bikes in the café racer design. So it was only logical for us to develop this type of motorcycle based on our VR6 Classic.

Horex is an old name in European motorcycles and has been around since the late 1920s and was known for its engineering and high quality production methods. Daimler Benz briefly owned the company before closing entirely in 1960. A small run of motorcycles, built for collectors and bearing the Horex 1400TI name were made up until 2009 when the rights to the company were then sold. Since 2010 Horex has new backers and a new management team and a production facility in Augsburg, Germany where all the bikes are hand built.

At the heart of Horex motorcycles is the company’s own patented 15-degree VR6 1218cc engine, with a claimed 126 hp and 88.5 ft lb of torque at 7000rpm. This six-cylinder unit features two intake valves and one exhaust valve per cylinder, positioned radially around each spark plug. Three parallel camshafts mounted in the head operate the valves. The center camshaft opens the exhaust valves in the rear cylinder bank as well as the intake valves in the front. This engineering concept of triple cams is unique to Horex and the company says the set up allows for a wide rpm range, better combustion and a broad power band.

For the Cafe Racer VR6 model, Horex employed the services of well-known German accessory company LSL Motorradtechnik to design and develop the bike. The suspension set up has been up rated over the Classic and the Roadster models with Horex adopting Öhlins FGRT upside-down 43 mm forks and Ohlins TTX 36 rear swingarm. Both are fully adjustable along with a 16-way adjustable steering damper.

Braking is via twin 320mm Brembo discs, single 264 mm rear disc, with Bosch ABS as standard.  Front end features include a CNC-machined triple clamp and clip-ons. The machined footrests on the Café racer are set slightly further back than those on the Horex Classic and the bike, without fuel, according to the company’s literature, weighs in at a stout 549 lbs.

LSL has also incorporated a deeper seat into the Café Racer’s design and a modified tail section over the passenger seat to make it look like a single seat bike. The front fender has been chopped and is narrower while the rear fender has been completely redesigned. Cosmetic differences also include a new, round headlight, aluminum radiator cover and different passenger footrests and new camshaft covers.