MotoGP To Use Control ECU Starting 2016 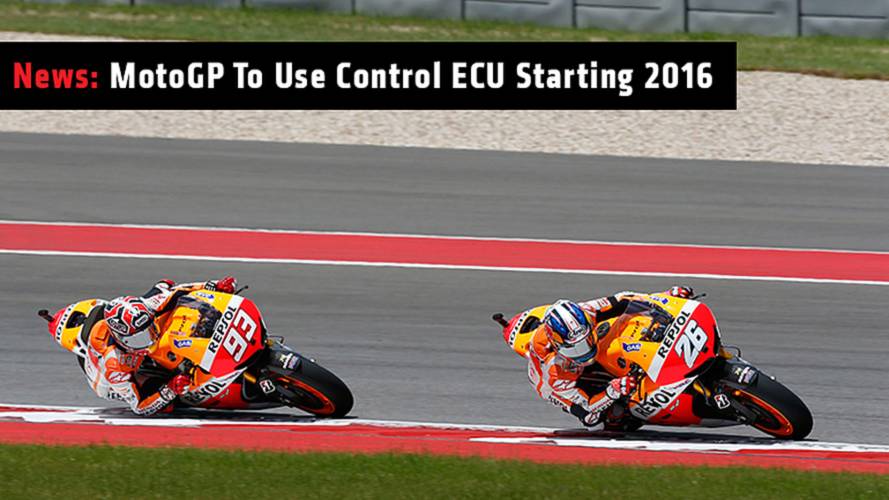 MotoGP has announced yet another unique feature to its rules. Luckily this one will not start until 2016.

Following our story about a third category being added to this year’s MotoGP series, race organizers have now confirmed this week that all entrants will run the same control ECU from 2016.

There has been a long debate amongst the teams about the current situation of engine electronics with Honda threatening to leave the series if a mandatory series-issued system were to be introduced.

However, at a FIM Grand Prix Commission meeting held in Qatar this week all team representatives finally agreed that a control ECU will be introduced from the start of the 2016 season. It was also agreed that all current entrants and prospective entrants for the 2016 MotoGP series would assist with the design and development of the new software.

However, this does not immediately solve the current situation with Ducati pulling out of the MotoGP’s top category - Factory 1 - for this year after developing an ECU system with Magneti Marelli.

This effectively forced MotoGP organizers to rush to create a Factory 2 class with different fuel limits, access to more engines and the ability to develop engines during the course of the season. However, Ducati and all non Factory 1 entrants will start the 2014 MotoGP season in the Open class, which was originally designed as a lower-cost option for independent teams running the same ECU.

The Open category allows teams to use 24 liters (6.3-gallons) of fuel a race (rather than 20 liters/5.28 gallons in factory 1) and have access to 12 engines for the year (rather than five for the season in Factory 1), but all entrants must all use the same Magneti Marelli software. Open entrants also get access to a softer rear tire option and unlike the Factory 1 class there is no freeze on engine development.

However if Ducati, or another Open team, scores a race win, two seconds or three thirds they are immediately promoted into the Factory 2 class were they will be limited to 22.5-litres of fuel per race and nine engines for the season. Three wins in the Open class will mean the tram also loses the concession to have a wider choice of tires, but they will still be allowed to continue develop engines during the season.

In the run up to the first MotoGP race of 2014 this weekend in Qatar, the GP Commission has also now confirmed that any manufacturer with a Factory entry that has not won a dry race in the preceding season, automatically gets the same benefits as Open entries, meaning Ducati's switch was ultimately unnecessary as it has not won since 2010. Suzuki, which will rejoin the series in 2015, is set to get the same allowance.