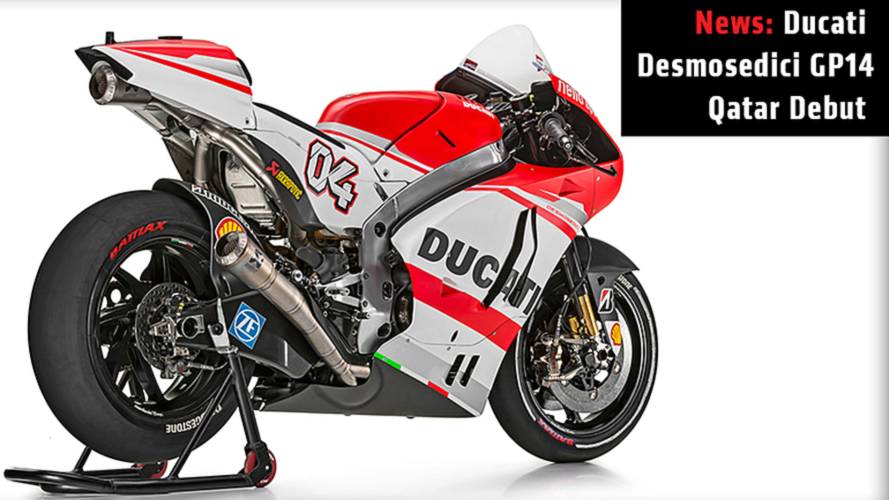 The Ducati Desmosedici GP14 is ready for the Qatar MotoGP. Are you?

This weekend will be the debut of Ducati’s latest premier-class racing arsenal as well as Dorna’s new MotoGP classification structure under the lights of Qatar. The new class buckets are Factory, Factory 2 and Open.

The Factory arena will be for teams willing to develop and maintain 100% prototype machines with proprietary software and limited engines over the course of the season as well as limited fuel for each race. The Open end of the paddock will mainly be comprised of satellite teams supplied with spec software provided by race officials but will be allowed more engines during the season and fuel over the course of each race.

Dorna made a last minute addition to this breakdown by adding a Factory 2 class which will be for teams who begin to dominate the Open field. Any team that wins one race, lands two second place finishes or takes three third places in the Open class will be limited to nine engines from 12 and 22.5 liters of fuel from 24 for the remainder of the season. Additionally, it has been announced that all teams will be restricted to spec software in 2016 so the days of Wild West software development are coming to an end.

Only Honda and Yamaha have committed to flex their respective bank accounts in the Factory class while Ducati has decided to take the more conservative route in the Open class with Suzuki suspected to follow suit. This seems like a very smart move on Ducati’s part given the fact that participating in the Open class will more fiscally responsible as its large team of experienced engineers should be able to tackle and master the spec software in a much shorter time than it would take to develop and fine tune an ECU on their own. This will also give Ducati a jump on the competition when the rest of the teams will be forced to adapt to spec software in 3 years. The economies of scale and first mover advantage effects at play here will provide Ducati with a competitive advantage.

However, race fans need not to fret about toned-down racing equipment. The Desmosedici GP14 weapon Ducati has crafted for this endeavor exerts over 235 horsepower from the 1000cc right-angle V4 power plant and tips the scale at just about 353 lbs. This 67% power to weight ratio results in a red Italian land missile with handlebars capable of over 205 miles per hour. Neither Andrea Dovizioso nor Cal Crutchlow should have a problem whipping this beast around the Open class and on Sunday night in the desert heat, they will get their chance.