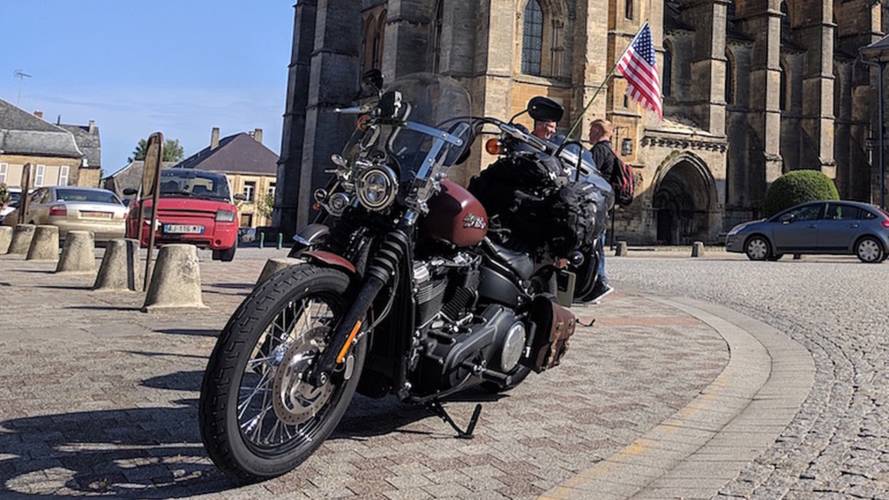 I’m a big fan of riding great big distances, but it’s the nature of long-distance trips that things won’t always go your way. Good planning helps you avoid the worst of it (Top Tip: DO NOT RELY SOLELY ON YOUR PHONE TO GET PLACES), but stuff happens. So, here are five motorcycle-related life hacks that I’ve picked up over the years—easy workarounds to problems that come up when you’re far from home. What I really hope is that you will be willing to add to this list by sharing your own moto life hacks in the comments below.

Many gas/petrol stations have throwaway plastic gloves that overly precious folk use to protect their hands from that nasty ol’ dino juice while filling up. These work as very handy, thin glove liners that I’ve found to be useful in two ways:

Strange things may be afoot, but it's a good place to find free glove liners

Firstly, of course, they turn any normal pair of gloves into rain gear. Wear them on the inside, silly. Yes, your riding gloves will still get soaking wet, but your hands will stay nice and dry. When I did an Iron Butt ride (1,000 miles in less than 24 hours) a few years ago, it was raining the whole damn time. I had anticipated this and came equipped with three pairs of gloves—two of which were waterproof—but ended up choosing to rely on my standard leather gloves lined with gas station gloves. The combination was more comfortable, and I was able to get new liners each time I stopped to fill the tank.

Secondly, the gloves help add a modicum of warmth, since they don’t allow air in. I’ve had times when I’ve been out and the temperature has dropped a little more than I’d anticipated. The wind protection offered by the gas station freebies has been just enough to allow me to carry on without discomfort.

Plastic shopping bags of the sort given at convenience stores may be destroying our planet, but they’re damned useful to have when putting on waterproof gear. Put one over your boot before running said boot through the leg of your waterproof trousers and you’ll find the whole process to be shockingly easy. In California one of these bags will cost you a dime, but it's still worth it.

Sure they're destroying the oceans, but they make it so much easier to boot on your boots.

Meanwhile, I’ve had some folks suggest that such plastic bags could also serve more or less the same purpose as gas station gloves, in that they can help your feet stay warm and dry when there’s water falling from the sky. I’ve never actually tried this, though. If you have, did it work out for you, or did the folds in the bag make things uncomfortable?

Sticking to a theme here, by gently tearing holes for your head and arms you can turn a trash bag into a makeshift windproof vest (or tunic if you're being overly precise), which helps you keep your core heat. This is more or less the same principal being employed by the old-school bikers who wrap themselves in newspaper before putting on their jackets, but with less hassle.

I prefer the trash bag method, because it’s not only easier; I’ve found you can often convince a gas station attendant to give you a trash bag for free, whereas you’ll have to pay for the newspaper.

Unlike with the above three items you may want to already have these to hand. You can pick up zip/cable ties at all kinds of places—gas stations, grocery stores, hardware stores, electronics stores—but it’s often the case that if you need zip ties to hold your bike/luggage together you need them so urgently that you won’t really be able to ride around looking for some to buy.

Also useful if you need to instigate a citizen's arrest or find yourself in an unexpected '50 Shades of Grey' scenario.

Nonetheless, zip ties are incredibly handy. Lighter than the roll of duct tape that I used to always carry on trips, they’re capable of being put to many of the same uses. Top tip: remember that you can daisy-chain the ties together to create a strap.

OK, perhaps this shouldn’t really be on the list. Because even more than zip ties you have to plan ahead to make use of this "hack," and, uh, a centuries-old system of keeping your pants up isn't exactly a "hack" anyway. But lately I’ve come around to the practice of wearing suspenders with my riding jeans and riding pants, and just wanted to share my enthusiasm. They are so much better than a belt, y’all.

This is especially true when wearing riding jeans. I don’t really have a butt—at least not one big enough to help keep a pair of trousers up (Sir Mix-A-Lot does not like me). So when the riding got sweaty I was finding I had to pull my waistband up when walking around off the bike. I’ve been rocking suspenders (known as “braces” in the UK) recently, however, and have been delighted with the results. I’m not holding my pants up like a little boy at stops, and I feel a little more confident that the jeans won’t pull down and expose skin in a crash.

Be the envy of old guys and hip dudes

No, they do not look cool when I take my jacket off, but in that case I’ll often let the suspenders hang loose, like an old-school ska boy or hipster.

Your turn now: what are some cleaver tricks you've picked up from your years of riding?