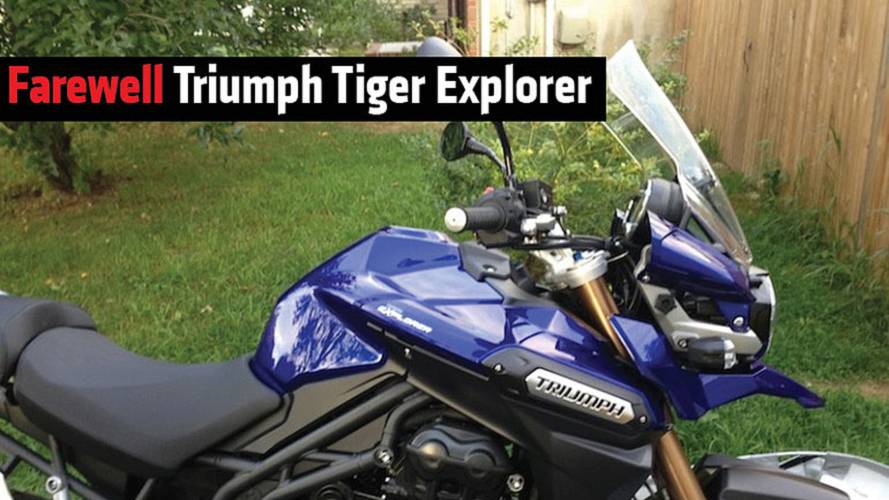 Long term review of the Triumph Tiger Explorer and a farewell to it as well.

The Triumph Tiger Explorer's 2012 release was followed with accolades and awards about an intended BMW GS usurper with a more powerful engine. Less than a year later, it was mid pack for power, lacked amenities and features and derided as an ill-handling, heavy bike. Despite all the name calling, I set out to find the right way to describe the Triumph Tiger Explorer.

When I first received the Explorer I became enamored with its power, precise road handling, sublime three-cylinder power delivery and exhaust note. I racked up 3500 miles in only a couple months. I loved getting on the bike every day, and couldn't imagine owning anything else. My wife had offered to buy me a second bike and I turned her down! I didn't feel like I would ride it enough to even bother owning another one.

That excitement turned to misery as my wife and I were limited to only two trips on the Explorer. Our first trip was to Ocean City, Maryland. It's only 125 miles to the shore from our house, an easy first trip to break in the bike. By the end we had both agreed that the Triumph luggage and stock seats didn't work.

The bike experienced rain, sun, and sand-sometimes all at once. It was great, exactly what a motorcycle trip should be. Shortly after we got back from our first trip, we decided to travel to Western Pennsylvania, to visit family and ride across the state using the old highways. We spent a weekend and 1000 miles riding the back roads of PA, visiting places I grew up and riding roads I haven't been on in 10 years. As we headed back the bike started to sound different, but I wasn't sure what it was. Halfway home the motor started sounding like it had the rattles and after returning home the bike just sounded broken.

Beginning of the End: Engine Noise

The Explorer's engine is it's best feature and worst feature. The motor makes wonderful power, linear, responsive, and the exhaust sounds great. Tractable at just off idle, able to crawl along at a snails pace and then immediately rev to 10,000 rpm with the front wheel just slightly off the ground and the traction control working overtime. What's not to love? It was a major disappointment when the engine went out, but to put things in perspective, of 8 months of ownership the Explorer had over 100 days of down time for engine failures. It's currently in the shop for repairs as I write. I still had not given up hope, not just for my bike but for all of the Explorer owners out there.

Triumph initially issued a customer service bulletin to have the cylinder head replaced for owners complaining of excessive noise. Triumph claimed it only affected certain VIN ranges and was not a damaged item. My Explorer had all twelve valves replaced due to out-of-tolerance stems and excessive heat damage. The local dealer has replaced the cylinder head on every Explorer they sold. The problem is larger than Triumph is willing to admit.

The latest engine failure is attributed to the cam chain destroying the cam-chain guides. So far this is a best guess while waiting on parts for several weeks now. When it ran the Explorer was sublime with excellent power, but when it didn't, it felt like your itinerant out-of-work uncle moved in, was sleeping on your couch in his underwear and eating all of your chips.

The stock Explorer suspension was under sprung and although it has adjustments for preload and rebound the ranges are limited. This is a problem when riding with extra weight, like luggage or a passenger-it was really a problem when you combined riding with a passenger and luggage. The suspension is harsh over rough terrain never quite able to soak up the bumps involved with riding off-road at speed.

The bike is packed all the goodies like cruise control, ride-by-wire throttle, traction control, ABS, as well as trip meters and fuel gauges. Cruise control as a standard item puts it a leg up on the competition but every other bike offered, with the exception of Suzuki's new V-Strom, comes equipped with more technical features.  Riding modes, electronic suspension, KTM's new ABS system and more, make the Explorer seem dated. The cruise control is difficult to actuate, easy to accidentally turn off, and very "jerky" when making adjustments.  Like an older car, the cruise would accelerate when engaged then settle back at the selected speed. Copious engine braking meant when disengaging the cruise deceleration occurred rapidly, and sometimes without warning. A too touchy throttle meant that riding with both hands on the bar took a great deal of effort to not roll the throttle when hitting bumps and turn it off. This generally led to either almost being rear ended or slapped from the passenger for jerking her head about like a rag doll. There are a few accessories you can add that are integrated nicely into the controls with matching brackets and plug-n-play installs. Heated grips and seats, powered top box, side cases and driving lights are all available and not too expensive.

Off-road the big Explorer was out of it's element. While it was never terrible and I was fortunate that I never dropped it, It simply was more work than fun. Being top heavy you were always working over time to keep it upright. When running a nice stretch at speed the bike worked well, traction was adequate, and cornering was predictable. Once again the suspension was a disappointment as it just doesn't work at soaking up the rougher terrain, and the wheels skipped harshly over washboard areas, rattling fillings and limiting traction. Ride it slower and you are rewarded with a pretty docile motorcycle, but who wants to off-road like you are steering your grandfather's Cadillac around the church parking lot?

Overall the Explorer is a capable, versatile motorcycle. Whether it's intention was for more on road or not; that's what it is. A very good on-road motorcycle with sharp handling and mile-eating power.

It's with a bit of a heavy heart that I did end up saying goodbye to the Explorer. I purchased this bike not quite a year ago with the intention of modifying it and riding it until the wheels fell off. I rode in rain, snow, some sleet, and blistering heat. A lot of on-road riding, two-up riding, and the occasional off-road adventure, piling up miles.  I really, really liked this bike. Then the tapping started-think old school small block Chevy lifter tap-then it got louder.  Kept telling myself it's nothing. Dealer said it was OK. Then one day I started it and it was definitely not OK.  Sounding like a paint shaker with a can full of bolts. One cylinder head, 12 new valves and 53 days later I got it back.  Cue winter.

Finally Spring came and everything was running good, got the bike back out of the garage and the snow is gone. Back to riding every day, rain, cold, hot, whatever I was ready. February goes by, no noise. March rolls around, some tapping returns. OK a bunch of Explorers make noise, so it's nothing. April it gets worse, I start taking videos in May. I compare them to the first issue. It sounds exactly the same. Now what?

Take it back to the dealer and there it sits. Waiting for parts, labor, Triumph, someone to figure it out. In the mean time I have lost my lust for the Explorer. I can't trust it to stay together.  Read the forums and there are a ton of issues. There are currently 5 Explorers in the service department where mine is with engine issues and other recall items. No matter how much you like a motorcycle if you can't ride it, it does you no good. So I am saying goodbye to the Explorer and hello to a brand new 2014 Yamaha Tenere ES. I will be sharing the build with you here on RideApart and documenting my travels, modifications, and issues.