Getting to Know Our 2018 Harley-Davidson Fat Bob 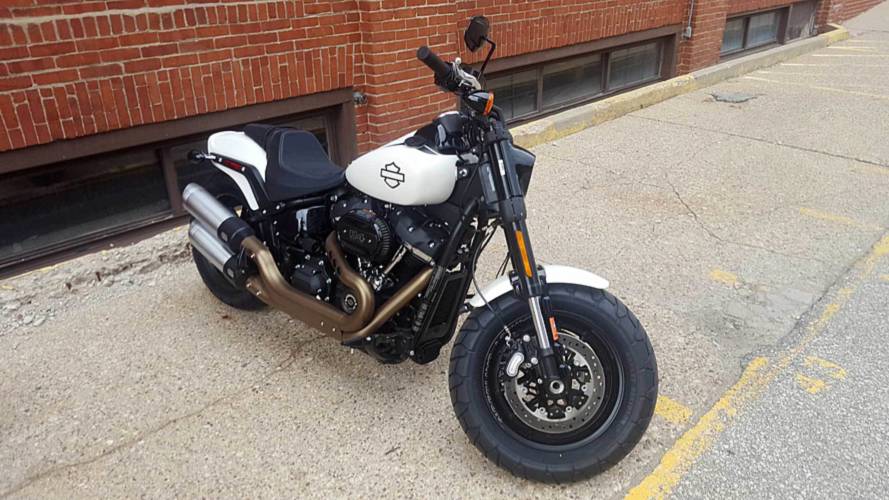 What am I getting into?

"This," I said to myself, "is gonna hurt." There I was, standing in a fenced-in courtyard at Harley-Davidson headquarters in Milwaukee, wondering if I'd made a huge mistake. Caroline, an H-D summer intern and my contact at HQ, had just left after handing me the keys to RideApart's new long-term test bike—a 2018 Harley-Davidson Fat Bob 114. Goofy, mildly-suggestive name aside, the bike was pretty impressive. It had a killer flat-white paint job with racy flat-black graphics, the blacked-out 114 ci mill looked great and had twin spark heads, and the fat tires combined with the rectangular head light gave it an aggressive, 80s sci-fi, cyberpunky look that I really appreciated. It was also, clearly, a short-range bike.

Let's back up a bit. Earlier that morning, around 06:00, I boarded the Amtrak Wolverine at the Detroit rail station en route to Milwaukee. I had my new Velomacchi Giro backpack stuffed with three days worth of clothes, some tools, some necessaries (Altoids, sunglasses, emergency kit, first aid kit, charger, etc.), my tablet with some reading material, and my riding gear—enough for three days on the road. See, I was on my way to Milwaukee to pick up a brand spanking new Harley for our test fleet. I was doing this because there's no media fleet in Detroit (it being Michigan and being kind of nowhere, do not @ me Detroit boosters), because I like trains, and because I hadn't ridden a long distance in years.

The plan was to pick up the bike Friday afternoon from Juneau Avenue, stay the night in MKE, take the ferry across Lake Michigan to Muskegon Saturday morning, stay the night in Muskegon Saturday evening after availing myself of all the historical ship museums, then ride the breadth of Michigan from Muskegon back to Detroit on two-lane blacktop. It was a good plan. A great plan if I say so myself. Like all plans though, it was only great until first contact. First contact being when I was finally left alone with the Fat Bob and realized that I was going to have to haul my fat, out of shape, 40-something year old ass 300 miles back to Detroit on a bike clearly designed for shorter trips.

Whatever, I was in it to win it. I got all geared up and rolled out into the parking lot. Friends, let me tell you how nervous I was. Pretty nervous. I'd just been handed the keys to an expensive company demo bike. It was the first Harley I'd ridden since The Year of our Lord 2004. My daily rider has an 850cc engine and the most recent bike I'd ridden was a 750cc Ural—this thing had an engine topping out around 1,900cc. People were staring, I was getting used to the bike's low-speed maneuverability (which is pretty good, in fact), and I was trying desperately not to drop Harley's bike in front of Harley's employees right there in Harley's parking lot. No pressure.

After a few laps of the parking lot, I bumped the bike up on to the sidewalk and pulled in front of the big Harley-Davidson sign there at the corner of Juneau and Highland. There I spent maybe twenty or so minutes doing a Facebook Live video, a little walkaround and Q and A session for you, the readers. Once I wrapped that up, I rode off into Milwaukee to explore a bit, grab a coffee, and check into my AirBnB. After check-in, I went out for a longer ride, getting used to the bike and looking for something to eat. I ended up at The Safehouse, but man, what a disappointment. It was definitely less than the sum of its parts, and the food was aggressively average. Eventually I ended up back at the AirBnB where I grabbed a couple drinks at a bar around the corner called the Y-Not II (highly recommended, you guys), watched that new Andre the Giant documentary for the umpteenth time, then sacked out.

Xochi, my bunkmate in Milwaukee, really likes the Rev'It Traction jacket I was wearing.

The next morning was chilly and misty. I grabbed brunch at this pizza joint that made a breakfast burrito the size of my thigh, then headed for the Port of Milwaukee to catch my ferry. Now, I've only ever been aboard a car ferry once, and never with a bike. The way this one worked is that after all the cars boarded, all the bikes (there were about a dozen of us) loaded up. We were shown to special tie-down areas and offered a fine selection of ratchet straps with which to tie our bikes down. I fell in with a dude on a Triumph Street Triple, and we spent our time aboard drinking coffee and talking about how cool inline triples are. Unfortunately, it was super foggy on Lake Michigan and visibility was about 20 feet, so I didn't really get to see anything cool while we were underway. That, and the fact that it was cold as hell at speed kept me in the cabin rather than on deck where I prefer to be.

Didn't move an inch while we were underway.

After a quick (relatively) 2.5 hours on the water we pulled into Port of Muskegon. Thankfully the bike hadn't fallen over during the transit, and I debarked along with everyone else with no drama. Once off the ferry I quickly made my way to my first museum—the USS Silversides museum. Silversides is a Gato-class sub that saw a ton of action during World War II. Of the roughly 80 Gatos that were built throughout the war, six survive today as museum ships—including Silversides' sister ship USS Cod in Cleveland, Ohio (the only museum submarine with its pressure hull intact. Use that bit of trivia to win some beers at the bar). Since it was late afternoon, the museum was pretty empty. I got Silversides all to myself for at least an hour, heaven for a huge naval history/technology nerd like yours truly. After I'd had my fill of the sub I sauntered over to the Prohibition-era/WWII Coast Guard cutter USCGC McLane, the museum's other vessel. Once again I had the whole thing to myself and was in ship nerd heaven.

The museum finally kicked me off ship at closing time, so I rode to the beach to hang out a little before I checked into the hostel I'd reserved. After check-in I had a super mediocre dinner at a fish place on the lake (I was batting .500 on meal choices), did some reading at the hostel, and sacked out.

Silversides saw a lot of action in the Pacific.

Sunday morning, and it was reckoning time. I geared up and rode out to a nice little diner in downtown Muskegon for a surprisingly good breakfast. Once I was all coffeed and fortified I set out for my first stop—the LST 393 museum. Like Silversides and McLane, LST 393 saw a ton of action during WWII. The museum is pretty great, and the self-guided tour of the ship is very nice. Almost everything is open for exploration, and there are only a handful of places off-limits. I spent a while wandering the decks, bought some souvenirs, then saddled up for my long journey home.

This fish is my spirit animal.

Here's the part where I talk a lot about the bike itself rather than the trip in general. Between Milwaukee and Muskegon, I really hadn't put that many miles on the Fat Bob. Now came the real test, a speedy jaunt through the Michigan countryside toward home. What would fail first—my phone, the bike, or my butt? Turns out, it was none of the above.

The bike was fantastic. Mostly. My first real impression of it once I was out of Muskegon and really into the trip was speed. Well, more importantly, acceleration. This bike was all ate up with motor. The Milwaukee 8 114 is a real improvement over the Twin Cam, which itself was a pretty good mill. As equipped, this bike was fast off the line and pulled hard in every gear. Since it's still a Harley it does run out of steam a bit at higher RPMs, but not as much as its predecessors. The engine was smooth, but I had a bit of trouble getting used to the throttle, which is very binary—either on or off which had me stumbling on more than one start. The six-speed trans did a great job getting the engine's power to the ground, and it's geared in such a way that I sometimes felt that both fifth and sixth gear were superfluous. The engine was happy to lope along under 3,000 RPM in fourth gear all day, and more than once I was surprised by my gear choices.

More than a few of the Fat Bob's ancestors were delivered to Europe aboard ships just like this.

It was also surprisingly comfortable. The seat looks thin, but it's both soft and supportive. Maybe not enough for really long-range work, but it did its job. I don't really ride bikes with forward controls, and ultimately don't care for them, but the Fat Bob's riding position was very acceptable after I got used to it. The handlebars are positioned well, and the grips are nice and beefy (like the rest of the bike). They really give you a feel of heft, and the bars are a great lever for throwing the bike into corners.

That said, my only two complaints (about the bike, that is) are in the comfort category. The first one is the mirrors—they're near useless. The stems on the Fat Bob's stock mirrors are too short—or they're placed to far inboard on the handlebars—and I spent the entire ride home dicking around with them in an effort to see more than my shoulders and forearms. I never succeeded. Second was the fuel cap—it made an intensely aggravating buzzing noise above 25 mph no matter how I tightened, loosened, or adjusted it. That's kind of unacceptable on a bike that costs as much as the Fat Bob and has fewer than 2,000 miles on it.

Ultimately, it took me seven hours to make the 200-plus mile trek back to Detroit along Michigan's back roads and two-lane highways. That was largely due to me lollygagging, stopping to constantly check and adjust my map and fight with the Bluetooth link between my phone and my helmet (a Sena Momentum that I'll review soon), taking a long lunch, stopping for coffee, etc. Along the way, I got very familiar with the Fat Bob, and I came away impressed. It's a solidly built, good looking, fun to ride cruiser and I can't wait to spend the summer thrashing it around Detroit.

So yeah, that's the story of how RideApart's long-term Fat Bob 114 came to Detroit to live in my garage. Stay tuned for more Fleet Bike action throughout the summer, Kanishka and I have plans for this thing.