Paul Jr. Summons a Genie That We've All Seen Before 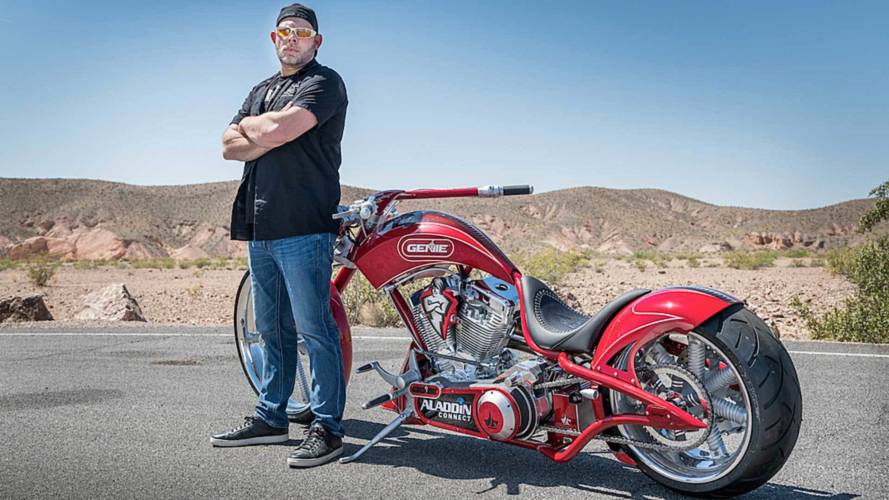 The latest creation from Paul Jr. and American Chopper is a cartoonish, big-wheeled chopper made especially for The Genie Company

Way back in 2000, AC/DC's Angus Young did an interview with The New York Daily News wherein he was asked about the comfortable sameyness of the band's albums.

That kind of repetitiveness works for AC/DC (because they rule), but not for many other things. Take Paul Teutul Jr., for example. He's been cranking out gaudy, nearly identical, nigh un-rideable choppers since the mid-aughts. He's still doing it today in the Year of our Lord 2018, when most other things from that era—low-rise jeans, emo music, compassionate conservatism—have long since vanished from the national conscious. His latest offering is yet another mid-aughts-style chopper commissioned by garage door opener maker Genie.

Would you like to know more? Let's let Genie tell us more about their new garage (or, well, lobby) queen.

The Genie Company, the leading manufacturer of garage door openers and accessories, was featured on last night’s episode of “American Chopper” with the national debut of the custom-built Genie Chopper. The commissioned bike was expertly crafted by Paul Teutul, Jr., owner of Paul Jr. Designs and co-star of the revived fan-favorite series airing on the Discovery Channel. Teutul, a renowned designer and fabricator, designed the Genie chopper with iconic features exclusive to the Genie brand and incorporated those features as working components into the sleek, glossy look.

CHECK OUT: Where Are They Now? OCC’s Vinnie DiMartino

“There are lots of unique points of the bike, but I have to tell you, the wheels on this chopper are some of my favorite wheels we’ve ever made,” said Teutul as he unveiled the custom-built chopper. “Each spoke was made to replicate the exact pitch of Genie’s patented screw drive technology. It added a super cool, authentic element. Overall, I wanted the bike to feel fast, modern and high-tech, and I think we accomplished that.”

The Genie Company team approached Paul Jr. last fall about creating a one-of-a-kind chopper that would reflect the American heritage of the company’s more than 60 years in business. Concurrently, they wanted it to convey the company’s innovative leadership in smart-connected, Wi-Fi enabled garage door openers. The team gave Paul Jr. brand standards to follow but left the final design completely up to him. By Q1 2018, the vision became a reality at the Paul Jr. Designs shop. Paul Jr. personally unveiled the bike in the Genie booth at the International Door Association’s annual IDAExpo in April.

Yep, those sure are wheels.

“We are beyond thrilled how the chopper turned out, and the opportunity to be featured on the reboot season of the show was an added bonus,” says Steve Janas, Vice President/General Manager Sales & Marketing for The Genie Company. “Our whole team is truly revved up and excited that we had a chance to align our iconic brand with the notoriety of the Teutul legacy of work.”

The Genie team is proudly displaying the chopper at their headquarters in Mt. Hope, Ohio.

So this is what Paul Jr. does now, eh? Just cranks out samey choppers one after another for appliance companies and corn lobbies? Whatever pays the bills, we guess.