WWI Vet Returns Triumphant from France for Tour of America 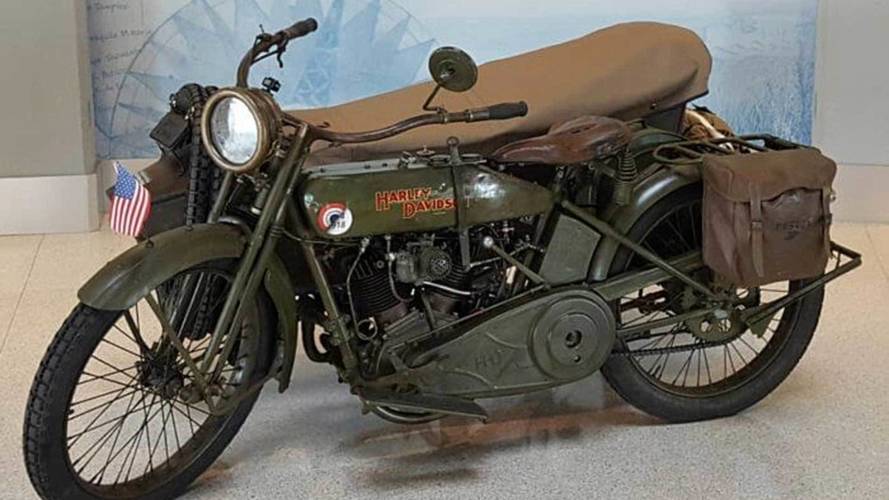 This 1918 Harley Davidson Model J, saw action in France during world war I travels from France for American summer tour

WWI Vet Returns Triumphant from France for Tour of America

Dateline 1918: France. War is raging in Europe with unprecedented losses. President Wilson commits the United States to a quick ending of the war. An American Expeditionary Force including 400 Harley-Davidson Model J motorcycles deploys to Northern France.

Dateline 2018: Mobile, Alabama. Wednesday, June 20, a large box from France arrives containing one of those 400 Harley-Davidson Model J's, deployed in France. Perhaps the only survivor?

The bike's current owner, Chistophe de Goulaine, purchased the barn find Harley in 2008. A ten year, painstaking restoration done by Pierre Lauvergeat returned the Model J to top condition. Restoration done, What do you do with a 100-year-old motorcycle? Well, you ride it. De Goulaine is soon riding it across the United States. He and his Model J plan to set out from Jacksonville, Florida, on a 5,600 mile tour of America after a short residency at the Gulfquest National Maritime Museum. Hopefully de Goulaine gets time to checkout the nearby Barber Motorcycle Museum while he's down there.

Alabama has special significance both for this bike and for World War I. Mobile was the jumping off point for General WillIam Sibert, a native Alabaman and commander of the first four units of the American Expeditionary Force and the First Infantry Division in France. A force that included those 400 Model J Harley's. This huge military force earned the title "The Big Red One," and if you happen to be a military buff like me, dig up the movie.

ANTIQUE: You're In the Army Now - Motorcycles at War

For de Goulaine, restoring and returning this motorcycle to its homeland expresses his deep admiration of the United States and Harley-Davidson motorcycles.

"This motorcycle was built to liberate Europe, we plan to complete all 5,600 miles without special technical assistance," he said.

The Harley-Davidson Model J's reputation for simple toughness was the  reason the US government bought 20,000 of these bikes for combat. Their record speaks for itself and H-D became the dominant American motorcycle maker for the next 100 years.

I fully expect de Goulaine to complete the trip as planned. His route could realistically include Detroit if he were planning on heading for Milwaukee, which I imagine he is. In fact, some of the smaller electrical and fuel components for Model J's were probably made right here in the Motor City. How about it Monsieur de Goulaine? Proper French wine and Cheese are on me.