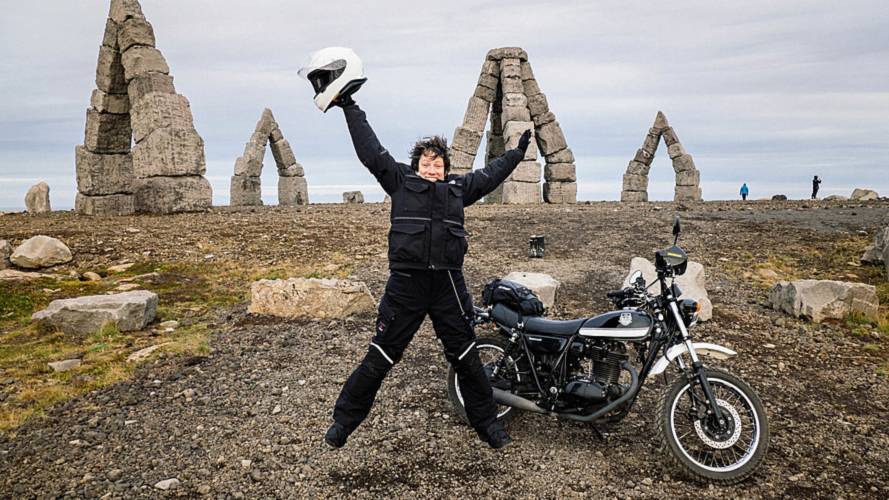 How do you bring a motorcycle home from the UK to Iceland? You take an epic road trip! Gabriela Motola put over 2000 miles on her Kawi TC250.

How do you buy a motorcycle abroad and bring it back from the UK to Iceland? You take an epic road trip!

Gabriella Motola wasn’t going to let 2,000 miles get in the way of owning a motorcycle once more after having to sell hers prior to moving abroad. To achieve that, Motola added a few stamps to her passport and clocked thousands of miles on her ride. Totally worth it.

WHY STOP; KEEP ON RIDING: 22-Year-Old Sets Out to Ride Around the World

Motola is a writer who moved to Iceland from England three years ago to write a book. An avid rider and motorcycle enthusiast, she had to sell her two bikes before heading out to the lonely little island of fire and ice. As we all know, however, the bug for riding is a bit of a virus and there’s no cure. Once it sets in, no matter how long you go without riding, you always get back to it one way or the other. Motola is no exception.

In her story published in The Guardian, she wrote that she heard of a friend selling a Kawasaki T250 in the UK and that’s all it took to trigger her thirst for riding. But how do you take a motorcycle from one island to the other? The easy way would be to strap the bike to a pallet, load it on a ship, fly back home and wait a few weeks for your ride to show up, but that’s no fun.

No, instead Motola did what any enthusiast would: she took the long way ‘round. Her mission—besides the obvious bringing the bike back home to Reykjavik, Iceland—travel from one famous Henge to the other.

Taking it all in while having lunch with the sheep

Everyone knows of the English Stonehenge, that monolithic solar dial that remains a mystery of engineering to this day, but have you ever heard of the Arctic Henge? This one isn’t so much of a mystery: it was recently built near the town of Raufarhöfn, one of the northernmost settlements in Iceland.

IT TAKES SOME PLANNING: How To Plan A Motorcycle Trip

Its construction began in 1996 in the hopes of breathing some life into the remote location, way off Iceland’s famous Ring Road. The structure works the same way its English counterpart does, working as a solar dial with rock-built portals. The ensemble is slightly less elaborate than Stonehenge, but the structures built from basalt rock are striking, relying only on gravity to keep them standing.

Motola made it her goal to travel from Stonehenge to the Arctic Henge. To achieve that, she left the UK and crossed France, Belgium, Germany, Denmark, took a 36-hour boat ride across the North Sea to the Faroe Islands, then another boat to Seydisfjordur, Iceland. She then traveled north on the Ring Road, then on dirt road 85 leading all the way to Raufarhöfn.

After completing her self-assigned mission, over 2,200 miles later, Motola headed back to Reykjavik via the picturesque north shore of the island. The Kawasaki T250 was finally home. How far have you gone to bring back a motorcycle?

Photos by Gabriela Motola for The Guardian