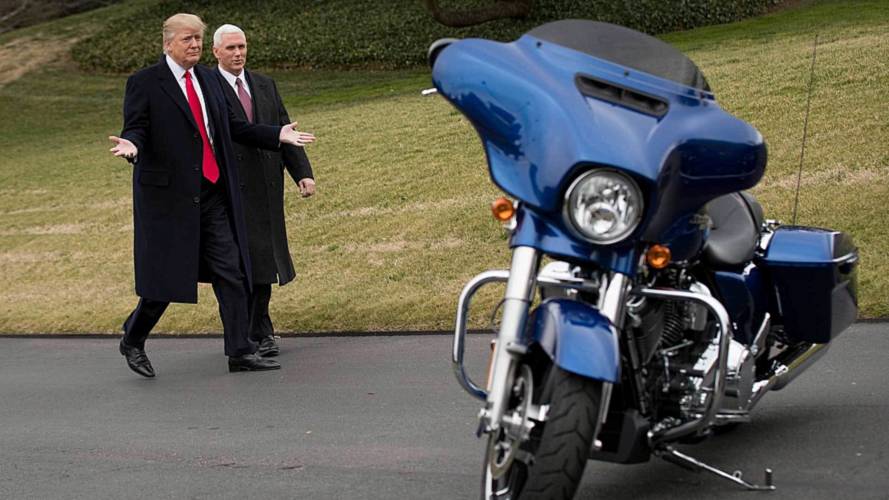 In a move that surprises absolutely no one, Harley-Davidson announced that it's moving some production to Europe to get around the growing threat of tariffs

Known stable genius and president of these United States Donald J. Trump has been facing a bit of backlash lately due to his little trade war and the tariffs contained therein. A trade war, we'd like to remind you, that he promised would be easy to win. Ever since he started talking about these tariffs, businesses from soybean farms to paper plants to nail manufacturers have begun to suffer as our former trading partners discuss levying retaliatory tariffs on us. The latest victim of Trump's tariffs is our very own Harley-Davidson. The Motor Company has decided to, get this, move a bunch of production overseas to avoid EU import tariffs. Art of the deal, folks!

According to Bloomberg, the growing trade war between Europe and the States is costing Harley—a company The Donald held up as a pinnacle of American Manufacturing just a short year ago—upwards of $100 million U.S. dollars a year. That's a lot of Softails. The EU's tariffs retaliating against American steel and aluminum tariffs will reportedly cost the MoCo around $2,200 per bike shipped to Europe. So, since Harley will have a seriously hard time absorbing that cost in its second biggest world market, company bigwigs decided to increase production overseas.

“We are currently assessing the potential impact on our U.S. facilities,” Harley-Davidson spokesperson Michael Pflughoeft told Bloomberg. “We are hopeful the U.S. and EU governments will continue to work together to reach an agreement on trade issues and rescind these tariffs.”

IN: What New Metal Import Tariffs Mean for US Motorcycle OEMs

Not only is this going to probably cost Americans jobs, but it's also going to put a real crimp in Harley's whole "Made in America" thing.

“A company that is as connected to America, and Americana, as Harley is probably going to be laying off U.S. workers in favor of foreign workers and going to be losing money as a result of this,” said James Hardiman, an equity research analyst with Wedbush Securities. “There’s a lot of irony here, to put it mildly.”

How's this all going to shake out? Who knows? Since no one in the White House seems to understand how international trade works, and we've seen how capricious and easily distracted The Donald is, it's 50/50 whether or not the tariffs go into effect or he gets distracted by a squirrel and forgets all about them. Whatever ends up happening, we'll be sure to keep you in the loop.

CORRECTION: Hey friends, it's come to my attention that I screwed up the headline here (Opinion: Harley Moves Production to Europe to Avoid Tariffs) which led to some confusion among the commentariat (mea culpa, mea culpa, mea maxima culpa). After a thorough dressing down, I've changed the headline because, well, it's wrong. Harley is planning to spin up production in unnamed overseas plants as a way to get around EU tariffs if this whole trade war thing happens, so it's speculative at this point. Carry on.