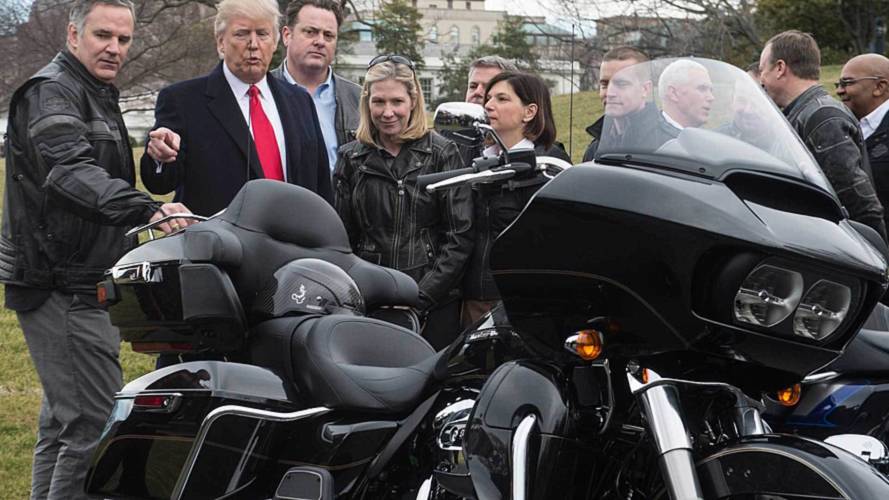 The news about Harley-Davidson possibly increasing overseas production to avoid EU tariffs got back to the President and he Tweeted up a storm about it.

On June 15, we all heard how Harley-Davidson is considering ramping up production overseas to keep costs down if the Trump Administration's disastrous tariffs go into effect. As expected, there was much wailing and gnashing of teeth and rending of garments over this news. Once the news was out, President Trump rushed to Twitter to make his feelings known.

A Harley-Davidson should never be built in another country-never! Their employees and customers are already very angry at them. If they move, watch, it will be the beginning of the end - they surrendered, they quit! The Aura will be gone and they will be taxed like never before!

Harley-Davidson, as we know, currently builds bikes in Australia, Brazil, India, and Thailand. Those bikes are built primarily for sale in their local markets and, aside from the Street line, aren't imported and sold here in the States. Perhaps POTUS missed the briefing on that bit of info before hitting Twitter.

....When I had Harley-Davidson officials over to the White House, I chided them about tariffs in other countries, like India, being too high. Companies are now coming back to America. Harley must know that they won’t be able to sell back into U.S. without paying a big tax!

There's more, of course. The President went on to tell Harley-Davidson that, despite the proposed tariffs raising the price of every raw material that goes into a Harley, that the Motor Company would not be affected by them.

“I fought hard for them and ultimately they will not pay tariffs selling into the E.U., which has hurt us badly on trade, down $151 Billion. Taxes just a Harley excuse - be patient!”

CHECK OUT: Harley-Davidson Sales Drop Again in Third Quarter of 2017

We're not sure how patient Harley-Davidson can be, honestly. According to Bloomberg, Harley's U.S. sales have dropped every quarter since Q1 2015. In the first quarter of 2018, sales dropped more than they had in five years. Now, looking down the barrel of increased production costs and export fees, ramping up production in other countries and slowing it here seems like good business sense. Time will tell.