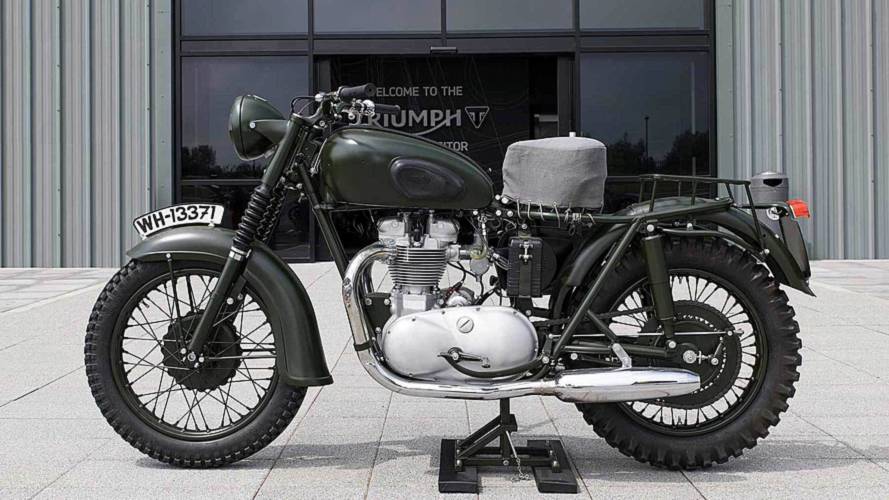 You know you want it.

When you think of great motorcycle scenes in movie history, what comes to mind? Brando crashing his Triumph in The Wild One? Ahhhnold tear-assing around Los Angeles on that black Fat Boy in Terminator 2? The entirety of Easy Rider or the naked girl puttering around on that red and white Honda CL350 in that super surreal scene in Vanishing Point? Those are all great and all, but one of the best bike scenes ever filmed was Steve McQueen's—or, well, Bud Ekin's if you want to get technical about it—attempted escape from Stalag Luft III aboard a stolen German Army bike in 1963's The Great Escape.

The three bikes used in the movie were all Triumphs—650cc TR6R Trophies, to be exact—since period correct, former Wehrmacht BMW R71s were both thin on the ground and, honestly, ill-suited for the kind of stunt riding needed in the film. The modern (at the time) Triumphs were lighter, faster, and easy to ride, so the producers grabbed a few, tarted them up to look like well-used military bikes, y voila. The bikes disappeared after filming, which was a pretty common occurrence. Recently though, one of the movie bikes resurfaced and, if you're going to be in the neighborhood of Oxford, England, in late August, you could see in person.

According to Auto Classics, one of the 1963 Triumph TR6Rs used in production of The Great Escape recently surfaced after living in obscurity for decades. No word on where the bike's been all these years, sadly. Probably gathering dust in some old gearhead's shed. The bike is currently on display at the Triumph Factory Visitor Experience at Triumph HQ in Hinckley, Leicestershire. In August, the bike will be displayed at the Salon Privé Concours de Elegance at Blenheim Palace near Oxford. At the concours, the bike will be entered into the Class B event which judges exceptional motorbikes built between 1940 and 1979.

If for some reason you've never seen The Great Escape and have no idea what we're talking about—like, say, if you're four years old or are otherwise a damned Philistine—we've included a video of McQueen's famous jump below for your edification.