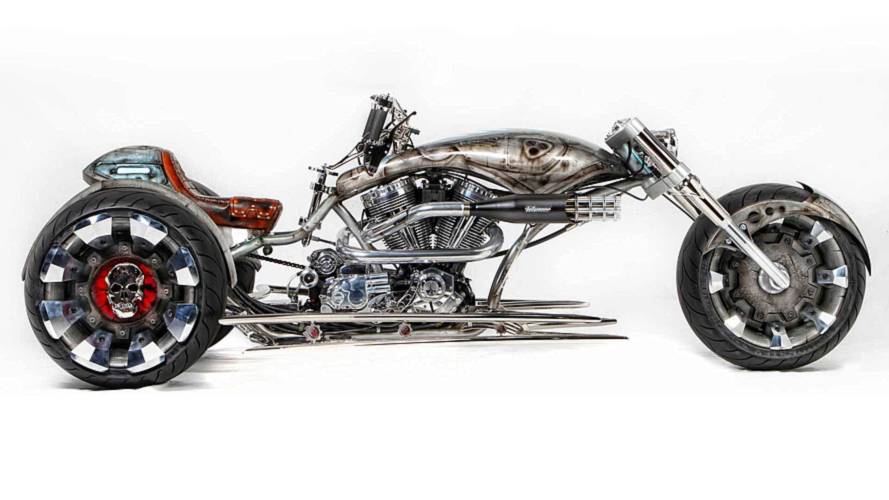 So, we couldn't help but notice that you guys are still, in the Year of our Lord 2018, super interested in news about the Teutels. We're not entirely sure why you care about televisions most macho drama queens a decade after they possessed any kind of relevance, but here we are. You've been especially interested in what's going on with Paul Jr. with the reboot of American chopper and Paulie's side hustle making lame, outmoded, aughts-style choppers for garage door manufacturers and corporate lobby groups. So, since this is apparently A Thing now, we've decided to give you what you crave—more Teutel family content.

After looking at the numbers and putting our heads together, we decided that we'd run a pair of articles wherein we highlight the five "best"—for various metrics of best—bikes and the five "worst" bikes designed by Paul Jr. We figured we'd split up the work and each of us would handle one article. Who would write what, though? Since I'm the Vice-President of my local Player Haters Society and an already vocal Paul Jr. detractor, it was a pretty easy decision. We decided that I'd write the "worst" article and, since he's Canadian and therefore very polite, Kanishka would write the "best" article. So, without further ado, here are the five worst bikes designed by Paul Jr.

Why I Hate Paul Jr.

So why do I hate Paul Jr.? Why do his bikes elicit in me this sort of bubbling rage whenever I see one? Because it's not 2003 anymore. Because he builds unrideable garage (or show) queens that are anathema to my idea of what a motorcycle should be. Because every single one is derivative of the last and is done in this swoopy, big-wheeled, cartoonish style that went out with boy bands and "compassionate conservatism". Because his welds suck and his fabrication is suspect, and because I couldn't pick one of his designs out of a lineup of other eye-wateringly expensive, aspirational, status-seeking "choppers" made by third-rate "designers" who don't understand what choppers actually are. That's why.

So, because I'm a hater and I hate Paul Jr.'s bikes, here are five of (what I consider) the worst bikes he's ever designed in no particular order.

You take Cadillac's name out of your mouth right now, Paul Jr.

My very first car was a Cadillac—a fully-loaded '79 Sedan DeVille in sky blue with the 425 V8 if you're curious—and ever since I've had A Thing for Caddies. Yes, I know the company's had its troubles. Yes, I know the Northstar was a hot mess (and the 4400, and the 8-6-4, and everything in the Malaise era) and the new design language looks like it was done using only a ruler and an X-acto knife. I don't care. For me, Cadillacs will always be the "The Standard of the World." That's why I find this bike so offensive. Everything about it is fake as a three-dollar bill, from the faux-Cadillac decklid styling on the rear fender to the awful-looking fender scoop stuck to the tank that looks like it was pulled out of the discount bin at Pep Boys. The worst thing about it is the panel mounted on the right side that is slathered with the word "supercharged". The bike's not even blown! YOU CAN'T PUT "SUPERCHARGED" ON A BIKE AND NOT MAKE IT SUPERCHARGED, PAUL. Anyway, I hate this bike because it's an affront to Cadillacs everywhere and I hope the ghosts of Antoine de la Mothe Cadillac, Bill Murphy, Lemuel Bowen, and Hank Leland haunt Paul Jr. for the rest of his life.

What the hell is even going on here? This thing is a mishmash of clashing lines and styles. Everything is pointy and sharp. It's a trike... not even a trike, but a dually trike. Who does that? Why does the exhaust exit right under the tank? Why the hell are there spikes on the tank facing the rider? It's also a rolling museum of mid-aughts hyper-macho meathead cliches—tribal patterns, flames, brass knuckles... Who is this for? More importantly, what is it for? I just can't with this thing, guys. I hate it because it looks like it was designed by a committee of attention-starved, half-bright 14-year-old boys all hopped up on Mt. Dew and Fortnight. Ugh.

2003 called, it wants its accessories back.

This is another one that offends me due to its treatment of the other, better vehicle that inspired it. Now, I've never owned a Ferrari and I don't have as close and personal a tie to that marque as I do with Cadillac, but I still respect Ferrari. I respect its racing heritage, its gorgeous, constantly evolving design language, its fiery and passionate Italian engineering—everything about it. This bike though? How dare Paul Jr. sully the good name of Enzo Ferrari by putting it anywhere near this uninspired, cookie-cutter, nondescript chopper. It's like a Fiero-based kit car Ferrari but without any of the quality or character of a donor Fiero. It's hot trash and the only thing it has in common with actual Ferraris is the color and its presumably six-figure price tag.

It's so close, but close only counts in horseshoes and hand grenades.

I hate this bike because it's so close to being good. Great, even. It's clearly rideable, has clean, old-school chopper lines and a cohesive theme, and isn't so obviously a corporate-sponsored bike. What kills it for me is that, once again, it looks like it came straight out of 2004. The spider web motif is played out, and tiny-ass mirrors that look like battle axes for pixies are extremely passe at this point. Also, why spiders? There are other creatures out there that are venomous. A whole lot, in fact. Why not make it a snake theme or, hell, a platypus theme? That'd at least make this thing unique. This bike is within spitting distance of great and Paul just couldn't pull it off. It's just... ugh. It's more depressing than anything else.

So there, there are my picks for the five worst bikes designed by Paul Jr. I'm sure you guys'll have a lot of opinions about these rolling cliches, so feel free to leave them in the comments. Oh, and stay tuned next week for the "five best" story in which will probably be nicer to Paul Jr. than I was here.