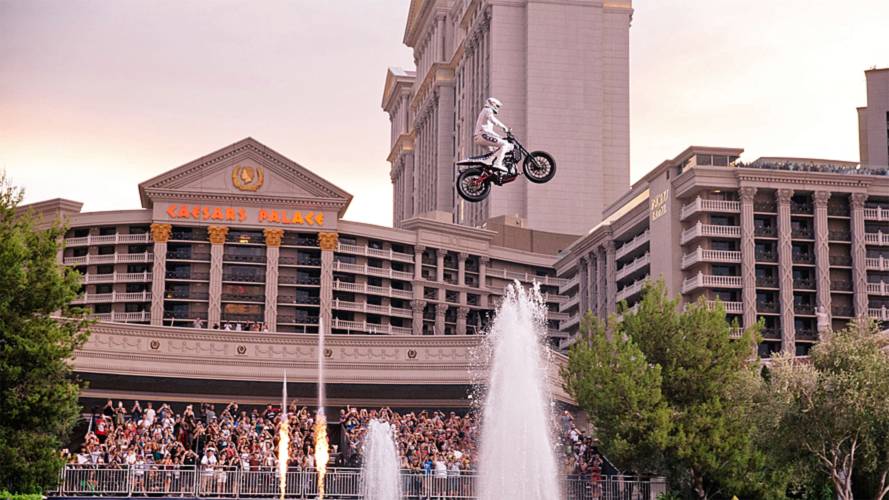 Stuntman and daredevil Travis Pastrana made history when he attempted three famous Evel Knievel jumps and stuck all three landings on his Indian Scout.

With his star-spangled leather suit and flowing cape, Evel Knievel was one, if not the, most popular motorcycle daredevils to have left his mark in history books. He set a number of records throughout his career and it was only a matter of time before someone decided to one-up him. That somebody is stuntman and X Games championship gold medalist Travis Pastrana who completed not one, but three record-setting jumps on Sunday July 8, 2018.

Travis Pastrana tackled some of Evel Knievel's most iconic jumps; some Knievel completed and some he didn't. Clad in a replica of Knievel's famous white leather jumpsuit on a scorching Sunday night in Las Vegas, Pastrana made history by completing the three jumps, one-upping the celebrated stuntman.

In jump number one, Pastrana tackled Knievel's 50-car, 120-feet jump he completed in 1973. The 2018 version of the jump included 52 cars for a total of 143 feet to clear. It was also the shortest of the three jumps which allowed Pastrana, straddling his Indian Scout FTR 750, to get some proper warm up. If "warm up" is what you want to call jumping over a crushed-car pit.

Here is Evel Knievel's jump at the Los Angeles Memorial Coliseum, 45 years ago.

HOW IT ALL BEGAN: Travis Pastrana and Nitro Circus Pay Homage to Evel Knievel

The second jump put a lot of pressure on Pastrana. It was a reproduction of an event when Knievel attempted to jump over 13 buses in 1975. He failed to clear the very last bus, brutally crashing into it instead, which left him with a broken back and pelvis. Five months later, Knievel was back in the saddle and managed the 133-feet leap over not 13, but 14 buses.

For Pastrana's stunt, 16 Greyhound liners, bigger and higher than the buses used in Knievel's original jump, were lined up between the ramps. His leap sent him flying for 192 feet between two rows of appropriately-colored pyrotechnics, before landing safely on the opposite ramp.

Evel Knievel shows us that it doesn't take much for everything to go wrong.

WHAT HISTORY IS MADE OF: An In-Depth Look at America's Greatest Daredevil: Evel Knievel

The last jump, but certainly not the least was an homage to Knievel's jump over Las Vegas' Caesar's Palace fountain. With a police escort, Pastrana took to the Las Vegas Strip to drive to the location of his last jump of the night, taking the occasion to interact with the fans on his way to the casino.

This is a stunt Knievel attempted in 1967 and is his longest, most notorious jump. He completely missed the landing, getting severely injured in the process. On the bright side, this jump also put him on the map and got the promoters chasing after him.

No gruesome failed landing for Pastrana, however. This jump wasn't the longest out of the three, but it was the most technically challenging due to the limited space to reach the recommended jump speed of 70 mph. Pastrana got his epic shot flying over the fountain with the Caesar's Palace in the background before sticking the landing. The only thing that went wrong: no spectacular explosion. The rider jumped into the stunt faster than the special effects team was ready for which caused a delayed reaction and a lack of pyrotechnics spectacular.

Knievel's failed attempt at sticking his landing in 1967 is a reminder that though they make it look easy, it takes one steel pair of cojones to take the risk.

Travis Pastrana made history by setting a new record for jumping over 52 cars, two more than Knievel's record. He also attempted and completed three of the famous daredevil's most iconic jumps. Pastrana celebrated his success with a few burnouts and a dive in the fountain—it was a scorching 110 after all in Vegas.