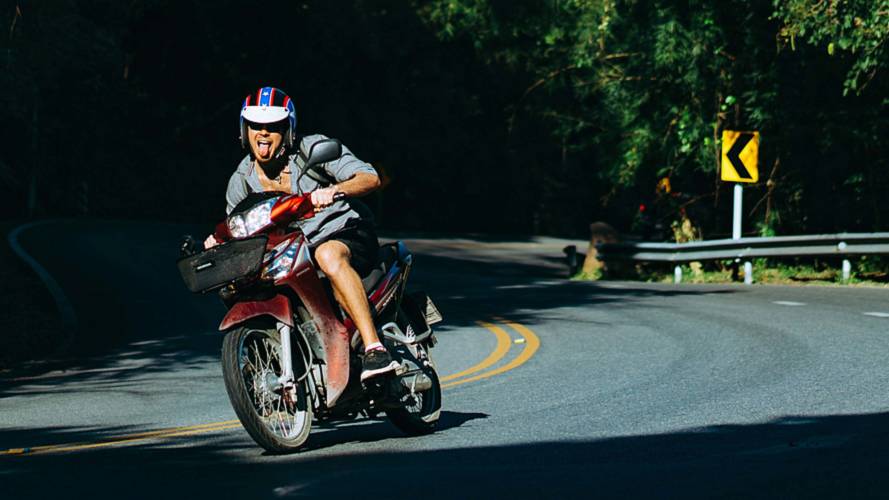 There are all the wonderful things about riding motorcycles people share - but there are also more annoying and less advertised realities. Here are a few.

Riding a motorcycle is a fabulous experience, but it doesn't come without its dose of reality

Everyone who's walked around wearing riding gear has lived this at least once: people being curious, asking questions, making small motorcycle-related talk. Admit it, you feel undeniably cool! We're a fairly rare species and I don't know about you, but I enjoy answering people's questions about riding and giving advice to new riders. It's also during these conversations that you realize how romanticized riding a motorcycle really is. Here are a few things nobody really tells you about the reality of riding a motorcycle.

Looks nice, doesn't it? It also looks hot and dusty and sweaty.

Granted, it is better to ride under the sun than in the rain. As most riders wear full gear (or at least should) whether the weather is nice or not, pool-party weather actually kind of sucks. Imagine having to wear a full jacket, a hat, and gloves in 85-degree weather. Sweaty right?

You can open up all the air intakes on the helmet, remove your jacket inner layer, choose a pair of lighter mesh gloves; there's no escaping it, you end up slow cooking in your gear. Plus, when the sun hits hard, everything gets hot, especially if you're sitting in rush hour traffic with not even the shade of a lamp post to give you a break. The sun heats up the asphalt as well which then radiates so you end up being like in an oven with heat coming from above and heat rising from below. Who smells bacon?

FEELING HOT HOT HOT: Everybody be Cool - Tips for Riding in a Heatwave

It's almost a complete workout

Riding a motorcycle is nothing like an advertisement for men's body wash.

Do people assume that because you own a motorcycle, you enjoy going stupidly fast on the highway? Obviously, that's because these people haven't actually done it. Riding can be quite the workout. Wind pressure makes the body work hard at highway speeds, especially on a model fitted with a smaller shield. The rider is pretty much holding on while managing the throttle and maneuvering the vehicle. You also tend to be ultra-focused and the faster you go, the more attention your actions require, which is equally draining. So no, we don't all enjoy going 100 mph.

You try switching bags every time you go outside and see how you like it.

I've been asked quite a few times when I show up somewhere "Oh! It's a beautiful day, I bet you came on your bike!". Except I didn't. And then I feel bad, like I need to justify myself for not enjoying the few decent days of summer on two wheels. Truth is... it sometimes gets stupidly complicated. If you're in a rush, forget it: it's faster to jump in the car then to pack everything in a motorcycle-friendly bag, dress in a motorcycle-friendly way, gather all the gear, put it all on, and finally make your way out the door. You won't leave for a good 5 to 10 minutes.

Especially as a lady rider, I have to transfer half of the content of a purse into a bag which means I sometimes leave important things behind and even losing things all together. It doesn't end there, either. Once you get to your destination, most of the time you're stuck carrying or wearing your gear unless, unlike me, you have a pair of convenient saddlebags that will keep your personal items safe for you.

Oh! Right. And if the forecast calls for some rain, you'll also want to add the rain gear to the list.

GETTING STARTED: What You Need to Know as a New Rider

There's nothing worse than an itch you can't scratch.

You know that itchy feeling that sneaks up on you and temporarily disables you until you get a good scratch? Does don't stop happening because you're riding. Imagine feeling the sudden urgency to scratch yourself under the foot while said foot is in a boot, resting on a foot peg. You can't exactly drop everything you're doing to reach down your boot or else you might end up with bigger problems than an itch. That's when you have to master your inner Jedi and not let that itch define you.

Oh yeah, and beware of sneezes!

Hitting a bee at speed is like getting shot with a BB gun at close range.

Another advantage of wearing proper gear is that most of time, you won't realize that you are constantly bombarded with everything while riding. Try riding without a proper pair of pants on just once and tell me how you like your free microdermabrasion. Dust lifted by the cars in front of you actually stings the skin. Pebbles and small rocks feel like needles poking. And bees? Ugh, don't get me started on bees. Even while wearing a jacket you can feel those tiny striped rockets smash into your shoulder, so imagine on bare skin. Think paintball, minus the tactical fun.

DON'T RAIN ON MY PARADE: Ask RideApart: How to Ride in the Rain

Sure, it sounds like I'm complaining a little about the reality of riding. Truthfully, it's those little quirks that make riding so special. These small issues are only a speck on the grander scheme of riding. You become part of a big family and, you get to feel pretty darn cool answering people's questions.