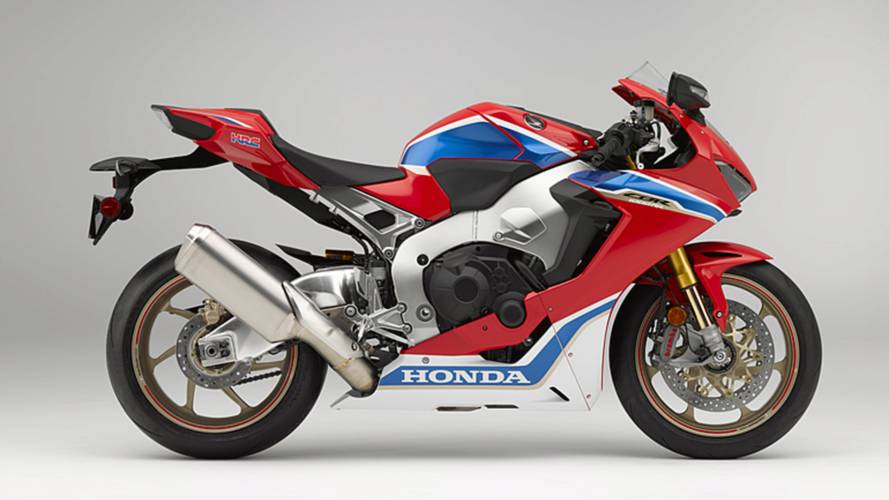 RideApart was at American Honda when the 2017 Honda CBR1000RR SP Fireblade was revealed. Here are our thoughts on the new flagship superbike.

The dated CBR1000RR gets a complete redesign for 2017 to finally give Honda a fighting chance in the fiercely competitive high-tech superbike category.

Honda on Tuesday released a brand new generation of the CBR1000RR SP superbike along with a full spec sheet.

Much more has gone into this redesign than simply aesthetic modification. In fact, to be precise, 68 percent of the parts that make up the bike’s bill of materials are completely new, as opposed to parts carried over from the model year prior. To cut to the chase, below are the top five aspects of the 2017 Honda CBR1000RR SP that we think you should take away, if nothing else:

*Note that all specs listed in this article are for the Euro-spec vehicle as the US specs are not yet available.

Aside from the aesthetic changes to the bodywork, the fairings are minimized to reduce material in certain areas such as around the engine case covers, exposing more of the motor surfaces.

Honda’s flagship sportbike was definitely due for a full update, considering the firepower launched by the competition around the market lately, such as the all-new Yamaha YZF-R1 and Kawasaki ZX-10R.

Honda blew the competition away in 1992 when the CBR900RR was released with huge power numbers, a chassis that elicited “total control” and in a package that weighed in some 76 lbs lighter than the closest competitor. When the ridiculously-priced $184,000 RC213V-S did not perform nor sell as well as Honda had hoped, a disruptive CBR1000RR redesign was Honda’s best shot at regaining the throne in the superbike segment on the 25th anniversary of the CBR brand.

The frame itself on the 2017 CBR1000RR SP shed 600 grams by thinning sidewalls and further optimizing material mass allocation. The same was done to the subframe and swingarm, along with increasing the rear axle diameter to drop 300g from both parts. The aluminum wheels switched from a 6 spoke Y-shape design to a 5-spoke Y shedding 100g and also improving aerodynamic performance.

Aside from the aesthetic changes to the bodywork, the fairings are minimized to reduce material in certain areas, such as around the engine case covers, exposing more of the motor surfaces. The upper and mid fairings are pulled inward, reducing the overall width of the bike by 18-24 mm. This not only reduces weight, but also improves aerodynamics.

A significant amount of mass is saved with the redesigned motor in the 2017 CBR1000RR SP, all while increasing power output by 10 hp. Retaining the same bore and stroke measurements, the compression ratio is up to 13.0:0 from 12.3:1. The engine speed redline has also increased to 13,000 rpm from 12,250. Channeling the exhaust gases is a titanium exhaust system and muffler that saves 6.2 lbs.

Another large portion of the mass savings in the powertrain is 4.4 lbs attributed to the new slip-assist clutch system, which also results in 17 percent less pull force required on the lever. Even the battery was optimized by going with a lithium ion design, saving 2.2 lbs (half the mass of a typical lead-acid unit). Finally, the titanium fuel tank (first of any mass-produced road bike) saves another 2.9 lbs but is protected by bodywork to reduce the chances of damage (but it also hides this work of art).

The electronics package on the new CBR1000RR SP is on par with all best-in-class options on the market. The rider-aid package includes ABS, 40g 6-axis IMU, nine-level traction control, slide control, wheelie control, rear wheel lift control, three-level engine braking, three-level quick shifter (up AND down including auto throttle blipping), fly-by-wire throttle with resistance feedback simulator built into the twist grip mechanism, and electronically-adjustable Ohlins suspension. The instrument panel uses a TFT display similar to that on the RCV213-S (and also suspiciously similar to that on the YZF-R1).

Ohlins has provided an extremely impressive package on the CBR1000RR SP for 2017. The 43mm NIX forks and TTX 36 rear shock are electronically controlled by the Ohlins S-EC system. The Bosch MM5.10 IMU (similar to the IMU on the Ducati 959 Panigale) sends real-time vehicle data to the suspension components to instantly optimize compression and damping through small servo motors. This extremely sophisticated system has been available on very few street-legal bikes to date such as the Yamaha YZF-R1M and Ducati Panigale R.

Honda has also announced that a CBR1000RR SP2 model will be made available for FIM homologation. The main differences between the SP and SP2 models are the engine head and wheels. The top end of the SP2 motor has 1 mm larger intake valves and 1.5 mm larger exhaust valves positioned at angles of 10 degrees and 12 degrees respectively. The wheels on the SP2 are forged aluminum Marchesini units for mass, aero and balance advantages. However, without proper race prep and tune, these upgraded wheels will be the only noticeable difference between the SP and SP2 models on the streets. The only reason street-legal versions of the SP2 are being produced is to qualify for the maximum number of racing series and classes; this is a race bike through and through.

HRC race parts and support will also be made available to SP2 owners, but only for those utilizing the bikes on professional race teams. This is an attempt to unlock the advantages of the new motor top end (through ECU flash, camshafts, etc) while keeping these non-EPA-approved modifications off of the street. This is why the US-spec RC213V-S had such disappointing power figures right out of the box when released, especially given the insane price point.

The RC213V-S was never intended to be an amazing streetbike, but instead a very capable platform from which to build a serious race bike. Regardless, the public perception did not care and the program ultimately suffered. The CBR1000RR SP2 program has a new strategy to avoid this distraction and focus on racing.

At least 500 SP2 units are to be built and sold globally over two years at an astonishing price of just $25,000. The CBR1000RR SP2 bike will first be made available for sale to race teams before being offered to the general public.

American Honda tells us the CBR1000RR SP will be available at dealerships beginning in the March/April 2017 timeframe. We suspect the entry-level CBR1000RR will share almost all parts with the SP model except the Ohlins suspension gear, titanium muffler and perhaps the TFT display at a price point around $16,000. What do you think?

2021 Honda ADV150: Everything We Know
Harley Trademarks New Café Racer And Flat Tracker Designs
Weekend WTF: Investor Wants Harley To Go Back To “Its Roots”
BMW Motorrad Opts Out Of Intermot And EICMA 2020
What Affordable Classic Bike Would Janaki Buy?